Axis Securities bets on these 16 large, mid, and small caps for up to 70% return while maintaining Nifty FY23 target at 18,400

For the long term, as everyone is positive on the India story, Axis Securities also maintained its positive stance, supported by a favourable structure emerging with increasing capital expenditure enabling banks to improve credit growth and continuity in a strong earnings trajectory in the Nifty 50 universe.

Axis Securities has maintained its Nifty50 target for end-March 2023 at 18,400 but expects the near-term trend to be rangebound due to India's 90 percent correlation with the US market.

Geopolitical tensions, inflation concerns, oil price above $100 a barrel since March, aggressive rate hikes by the US Federal Reserve to control inflation and fears of recession in the world's largest economy have played a key role in the current volatility.

Not only Fed the but other central banks including Reserve Bank of India (RBI), Bank of England, and the European Central Bank have increased their focus on controlling inflation. RBI has already raised the key repo rate by 90 basis points (bps) in last two meetings to 4.9 percent and experts are expecting it to go back up to pre-Covid levels. The Fed has hiked the funds rates 150-175 bps, and experts expect increases by125-150 bps by the end of December 2022. One bp is one-hundredth of a percentage point.

"In line with the expectations, all central banks are now focusing on controlling the inflationary pressure by front-loading the rising rates in the next six months. Keeping this in view, how the sustainable demand scenario pans out in the near term needs to be keenly watched," Axis Securities said.

In any case, the securities firm foresees inflation touching higher levels in the next couple of months but believes it would be followed by some moderation in the coming one or two quarters.

Elevated oil prices are one of major reasons for higher inflation. International benchmark Brent crude futures have traded in the range of $100-120 a barrel since March, which is definitely a negative signal for oil importing countries like India, which imports 80-85 percent of its oil requirements.

On the other side, the rupee has also been depreciating against the US dollar, creating a risk for the current account deficit. To reduce the pressure, the government has recently taken some measures by increasing the import duty on gold and raising the export tax on the petroleum sector. The currency is trading below at 79 (at 79.16) and experts expect it to fall further to 80-81 levels in near term.

As a result, in June, the market has broken its 52-week low and corrected more than 12 percent this year before its current recovery from a fresh 52-week low of 15,183 on the Nifty50. Presently, the index is still down 15 percent from its record high levels.

Another reason behind the correction and restricted upside is the consistent bearish mood of Foreign Institutional Investors (FIIs), who have been taking the money out of India since October last year. FIIs have net sold around Rs 3.85 lakh crore of Indian shares since October 2021 although Domestic Institutional Investors (DIIs) have managed to compensate for the outflow to a major extent by buying around Rs 3 lakh crore of shares in the same period.

According to the National Securities Depository Limited, 75 percent of the FIIs outflow was from the financial and tech sectors in the last eight months and 6 percent selling was in the metals sector, which took place mainly in May-June 2022, said Axis Securities, which believes the bulk of the FII selling is already over and its extent is likely to diminish. Trading is likely to remain volatile and cautious with the inflation print and aggressive tightening.

Overall, it believes that once the volatility settles down in H2CY22, FIIs will regain confidence in emerging markets. "This thesis will be particularly true for India as strong earnings growth and economic recovery will play out for the remaining months of 2022."

For the long term, as everyone is positive on the India story, Axis Securities also maintained its positive stance, supported by a favourable structure emerging with increasing capital expenditure enabling banks to improve credit growth and continuity in a strong earnings trajectory in the Nifty 50 universe.

The cumulative net profit of the NSE 500 universe for the last four quarters reached all-time high levels (crossed Rs 9.5 lakh crore in Q4FY22), said Axis Securities, which foresees FY23 and FY24 Nifty Earnings Per Share (EPS) at Rs 826 and Rs 920, marginally down 2 percent and unchanged, respectively, after the Q4FY22 earning season. Its estimates are conservative and 9 percent below the consensus estimates.

The securities firm has maintained its Nifty March 2023 target at 18,400 by valuing it at 20x on FY24 earnings versus 22x earlier. It has cut the Nifty multiple to accommodate the rising interest rate scenario.

In the near term, the market trend is likely to be rangebound and the market will adopt a wait and watch approach till more clarity emerges on the direction and intensity of prevailing inflation as well as the demand scenario, it believes.

Keeping this in view, it believes that even though the Indian markets will fall along with global markets, the intensity of this drop is likely to be much lower.

Some experts are still expecting another correction in the market in the near term. That might be the bottom and would bring valuations to more comfortable levels. A few of them are raising a possibility of a 10-odd percent correction because an actual recession in the US is yet to materialize. What is playing out currently is just the fear of recession, and actual earnings downgrades are yet to be seen.

Given the backdrop of rising concerns over the global slowdown, aggressive tightening and preference for domestic interests, export-oriented themes are likely to be muted or perform conservatively in the near term, Axis Securities said.

On the positive side, it said that given the government's stance on domestic interests first, as well as India being a domestic consumption-led economy, local or domestic-oriented themes are likely to deliver superior performance in the near term. "At this juncture, banks and automobiles look attractive," it said.

In the longer term, the securities firm believes two major trends are likely to emerge from here onwards 1) Inflation as a big theme. Value-focused sectors, being more inflation proxies, tend to do well in the rising inflationary scenario and would likely see a notable allocation in the next one to two years; and 2) The market's earning expectation remains intact even though it has witnessed a notable correction in several stocks from their 52-week highs.

It further believes that 'growth at a reasonable price’ is an emerging theme that provides good long-term risk rewards in the current market environment. 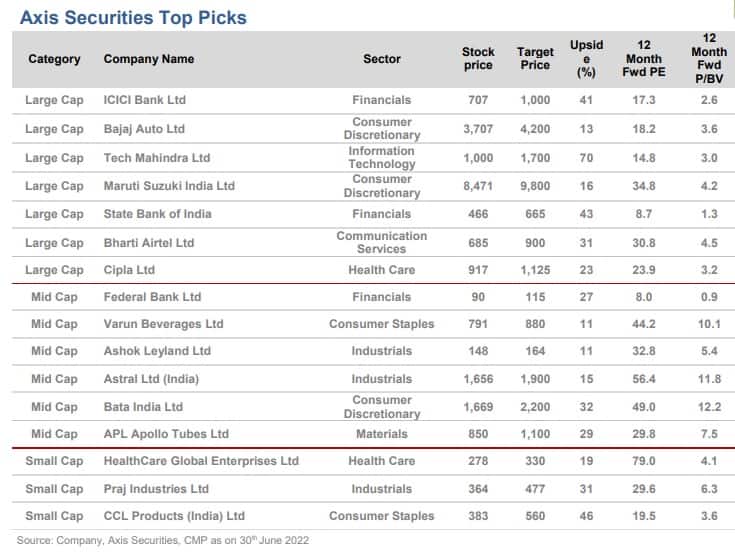 Disclaimer: The views and investment tips offered by investment experts on Moneycontrol.com are their own and not those of the website or its management. Moneycontrol.com advises users to check with certified experts before taking any investment decisions.
Moneycontrol News
Tags: #Market Cues #Market Edge #Nifty #Sensex
first published: Jul 6, 2022 01:09 pm