Ashok Leyland and Minda Industries remained in the top 10 buying list of mutual funds again, while Vodafone Idea, Future Retail and Syngene International continued to be in top 10 selling list in August too.

Equity and equity-related mutual funds witnessed outflow for the second consecutive month in August as the profit booking by investors continued.

"Except for Focused, Sectoral/Thematic Funds and ELSS categories, all the other categories witnessed net outflows in August. Large Cap category was the worst hit during the month followed by Multi-Cap and Value Fund categories. The number of folios as well as funds mobilized during the month was marginally higher than July. But at the same time the redemptions too shot up sharply. This indicates that more investors chose to booking profit given the surge in the equity markets across segments in the recent times," Himanshu Srivastava, Associate Director - Manager Research at Morningstar India told Moneycontrol.

Meanwhile from March 23 lows, both indices have surged more than 50 percent each and that is why the market has not seen any major upsurge in last few weeks. Experts feel in fact investors turned cautious as most of positive news already discounted by the market.

As per SEBI data, mutual funds net bought Rs 9,339.02 crore worth of equities in August, but FIIs continued to be buyer for fifth consecutive month, to the tune of Rs 37,846.54 crore. 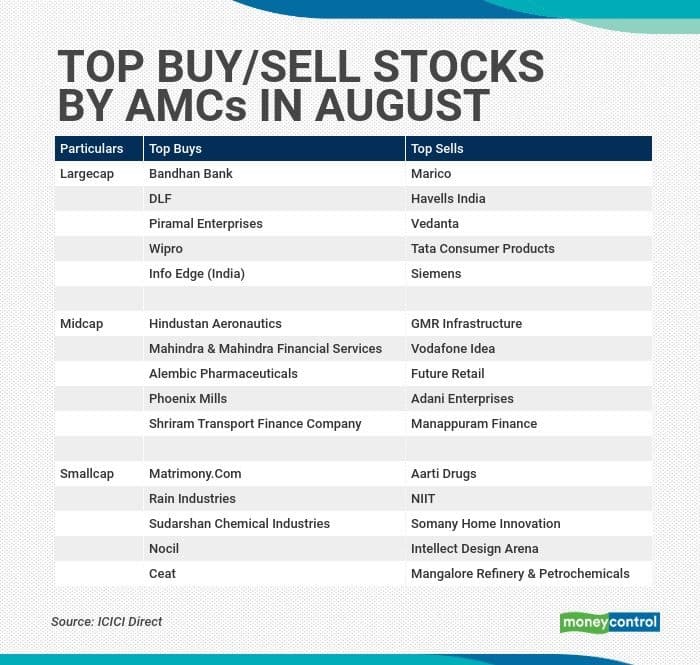 Ashok Leyland and Minda Industries remained in the top 10 buying list of mutual funds again, while Vodafone Idea, Future Retail and Syngene International continued to be in top 10 selling list in August too.

On September 14, there was huge buying in midcaps and smallcaps after the Sebi tweaked the rule for Multi-Cap funds, saying fund houses have to invest minimum 75 percent in equity and equity related schemes, and minimum 25 percent each should get invested in large, mid and smallcaps by January 2021.

Experts feel around Rs 25,000-40,000 crore could shift from largecap to mid and smallcaps. As a result, the Nifty Midcap index was up nearly 3 percent and Smallcap jumped over 5 percent, though Sebi allowed mutual funds to merge multi-cap schemes, or re-position under different category, which was largely expected by experts.

Multi-cap funds have almost 74 percent of AUM allocated to largecaps while allocation to mid and small caps are 16.5 percent and 6.2 percent respectively.

"If the SEBI recommendations are implemented then there could be a shift of around Rs 40,500 crore from large caps to mid and small caps on the higher side. Small caps were likely to receive the lion's share of around Rs 28,000 crore while midcaps will also get a lower allocation of around Rs 12,900 on the higher side. This has led to frenzied activity in the smallcap space on September 14," Jyoti Roy - DVP- Equity Strategist at Angel Broking told Moneycontrol.

However, he believes that the situation is still fluid and the actual shift could be lower as MF houses are most likely to ask SEBI to reconsider the proposal.

"Even if Sebi does not reconsider the proposal then fund houses have the option of either merging it with existing large cap schemes or changing the fund categorization to minimize the impact. Therefore the actual flow to smallcaps may actually be lower than Rs 28,000 crore expected by the markets," he said.