Ashish Kacholia raises stake in 4 companies, cuts down in 7 in Q3; do you own any?

Ashish Kacholia, an expert at spotting quality stocks in the small and midcap universe, increased stake in four companies and reduced exposure in seven during the December quarter, shareholding data available on AceEquity on January 20 showed. He left his stake unchanged in eight companies.

Vaibhav Global and Apollo Pipes are among the companies where he raised the stake. In the other two companies, his stake went up more than 1 percent for the first time after the September quarter.

He raised his stake in Paushak to 1.19 percent in the December quarter. Paushak is a part of the Gujarat-based Alembic group of companies.

Over the years, Paushak has established a multi-product capability in phosgene and its derivatives manufacturing. It is also India’s largest phosgenation player in the private sector.

The shares of these four companies have given positive returns since September 2019. Paushak has rallied by about 19 percent, Vaibhav Global by 8 percent and Birlasoft by 5 percent. Apollo Pipes has remained flat but with a positive bias.

Table: It mentions only those companies in which Ashish Kacholia held over 1 percent stake in the December quarter as of January 20. This may not be his complete portfolio. The table is for reference and not for buy or sell ideas: 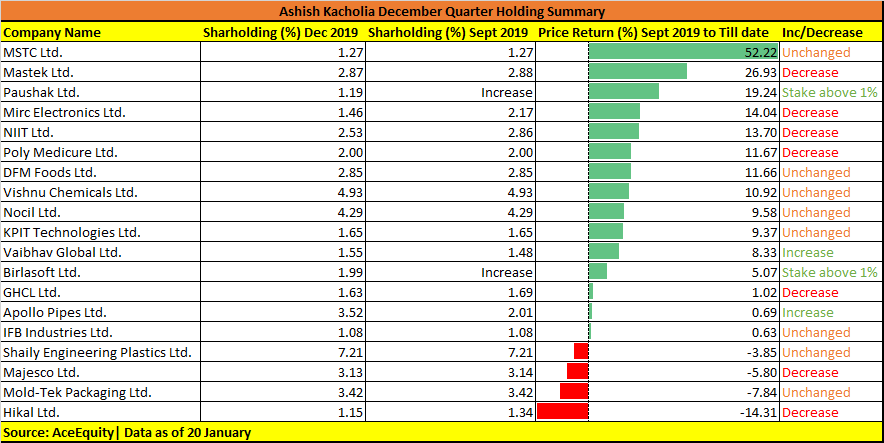 If you are a risk-taker, then a peek into his portfolio for the December quarter will reveal plenty of stocks that have the potential to deliver good returns. The small and midcaps that were marked underperformer in the calendar year 2019 are showing signs of recovery.

Five of these seven companies have given positive returns since September. Mastek has risen 26 percent, Mirc Electronics gained 14 percent, NIIT rallied 13 percent, Poly Medicure was up 11 percent and GHCL rose by about 1 percent.

Most of the eight companies in which he left his stake unchanged have given positive returns. MSTC tops the list with gains of more than 50 percent since September 2019. DFM Foods has risen 11 percent, Vishnu Chemicals 10 percent, Nocil and KPIT Tech both up 9 percent while IFB Industries has rallied marginally.