Overall pattern setup suggests that trend could remain intact while decline could be bought to continue its upward journey, experts said.

Finally, the market has broken its consolidation of the last few weeks on the positive side and registered fresh record highs in the truncated week ended April 18.

It was despite profit booking in the last session ahead of an extended long weekend and mixed global cues.

FIIs remained strongly active in the market given the strong start to Q4 earnings as they net bought more than Rs 2,000 crore worth of shares during three trading sessions week, taking total inflow to more than Rs 64,000 crore in February-March-April, partly due to decline in US treasury yields.

But the major action was seen in smallcaps rather than midcaps, as about 39 percent stocks in BSE Smallcap index closed in green, of which top 22 stocks surged between 10 percent and 37 percent.

Among these, SpiceJet surged 24 percent after Jet Airways shut down its operations temporarily. Jet was the biggest loser among smallcaps, falling 37 percent during the week. 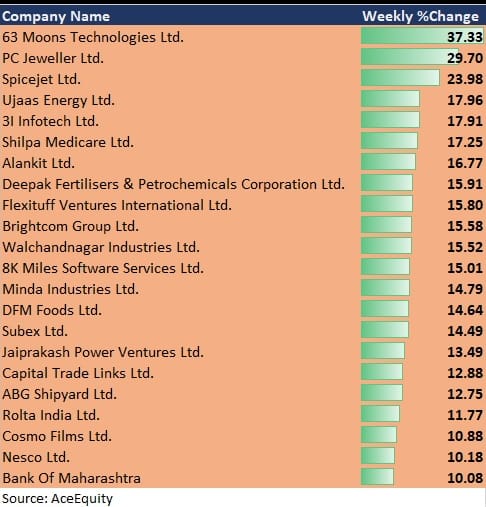 Primary markets were also active after the lull in 2018. Polycab India and Metropolis Healthcare rallied 18 percent and 9 percent at the opening, which proved the positive sentiment of the market participants, experts said.

The sentiment towards India has turned hugely bullish from a short-term perspective which can take the Nifty50 above psychological 12,000 levels before election results, but one should be cautious at this point of time because of more than 11 percent rally since February 19, experts said, adding one should keep some cash in hand to pick quality stocks in correction which could be likely after the election outcome or just before that.

In addition, stock specific action is expected to continue in the coming weeks due to March quarter earnings.

"Volatility will continue to remain on the higher side as knee-jerk reactions are expected due to the ongoing results. Investors must stay on the by-lanes and not rush in to ride the current rally till the uncertainty fades away," Jimeet Modi, Founder & CEO, SAMCO Securities & StockNote told Moneycontrol.

Vinod Nair, Head Of Research at Geojit Financial Services also said in the near-term, investor's focus will be on Q4 earnings and elections.

Net profit of Nifty50 companies is expected to grow by 20 percent YoY for Q4FY19 and the growth is mainly driven by the banking sector due to the low base in Q4FY18, he added.

Banking and financial services industry will be on next week's radar as important results of companies such as Indiabulls Housing Finance, Yes Bank, M&M Financial, Axis Bank, SBI Life among others are going to be announced.

Technically, the Nifty50 formed a small bullish candle on the weekly scale. Overall pattern setup suggests that trend could remain intact while decline could be bought to continue its upward journey, experts said.

"Index has been making higher highs - higher lows from last four trading sessions on daily scale and till it holds above 11,700 zone it could extend its momentum towards 11,888 then 12,000 zones while on the downside support is seen at 11,666 then 11,550 levels," Chandan Taparia, Associate Vice President and Analyst-Derivatives at Motilal Oswal Financial Services said.