After Budget 2019, here are 10 key factors that will keep traders busy this week

Experts feel there could be some more correction initially in the coming week, but gradually, the market will shift its focus from the Budget to earnings

The market, despite seeing a correction on the Union Budget day, finished the week that ended on July 5 with moderate gains.

The Nifty50 gained 0.2 percent and BSE Sensex added 0.3 percent. The Nifty had gained more than 150 points in first four trading sessions of the week on optimism ahead of the Budget.

Overall though, the Union Budget presented by Finance Minister Nirmala Sitharaman failed to enthuse the market amid caution over meeting the fiscal deficit target for FY20 (reduced from 3.4 percent to 3.3 percent), it provided a prudent plan for FY20 as well as for the next five years, given a slowdown in the economy and the weak financial position of the country.

Experts feel there could be some more correction initially in the coming week, but gradually, the market will shift its focus from the Budget to earnings.

"We might see the overhang of the Union Budget on Monday as well and thus suggest keeping extra caution. The sharp plunge in the index indicates more pain ahead and decline below 11,800 in Nifty would trigger a further fall," Jayant Manglik, President - Retail Distribution at Religare Broking told Moneycontrol.

Jimeet Modi, Founder and CEO at SAMCO Securities and StockNote also said with the most awaited event finally over, its overhang will continue the next week as the offshoots of certain implementations will be visible in the capital markets.

"As the divergence between Nifty and Nifty Midcap/ Small cap indices in June is way above the past few years, there is higher likelihood of a larger correction in large caps compared to the broader indices. A higher correction is therefore in the making, and investors must ideally look for booking profits in large cap companies as the process of mean reversion has started," he added.

The BSE Midcap and Smallcap indices underperformed frontliners, falling more than half a percent each.

In first week of July, FIIs sold more than Rs 3,000 crore worth of shares while DIIs were net buyers to the tune of more than Rs 700 crore, as per data available on Moneycontrol.

Here are 10 key things that will keep trader busy this week:

The June quarter earnings season will kickstart with IT majors Infosys (July 12) and TCS (July 9) and IndusInd Bank (July 12) declaring their results in coming week. The overall earnings growth, which is expected to be in double digit for Nifty as well as Sensex companies, is likely to be driven by banks (which had faced asset quality crisis in year-ago period), brokerage houses said.

The brokerage expects a weak quarter for (1) automobiles (lower sales volumes and margin compression due to increase in discounts), (2) metals and mining (decline in realizations) and (3) oil, gas and consumable fuels (weak refining margins and adventitious losses for downstream companies).

The country's largest IT services provider, Tata Consultancy Services (TCS), is expected to deliver steady growth in constant currency revenue at more than 3 percent with around 50 basis points cross currency headwinds, but profit could be lower due to margin pressure sequentially in Q1FY20.

"We expect TCS to post broad based revenue growth and expect its strong deal momentum to continue. We expect EBIT margins to decline by around 90 bps on account of wage hike, rupee appreciation and visa costs," Prabhudas Lilladher said.

Key things to watch out for would be the management commentary of its BFSI vertical, the outcome of the budgeting cycle, growth outlook for the US and European geography, progress on platform strategy, order bookings, impact of talent crunch in the US on margins and progress on localisation.

The second largest software company is also likely to deliver around 3 percent growth in constant currency revenue with around 50 basis points cross currency headwinds, but pressures in margins due to wage hikes could impact profitability for the quarter ended June 2019.

"We expect financial services vertical to report robust growth. Revenues include one month of revenues from the Stater acquisition," Kotak said.

The brokerage expects EBIT margin decline of 110 bps due to: (1) Wage revision for 85 percent of employees that will impact margin by 100 bps, (2) Higher H-1B visa applications relative to the previous year that will result in additional costs and (3) Rupee appreciation impact of 30 bps. "Margin impact will be offset to some extent through higher utilization and cost control measures."

Overall, brokerage houses expect investors to focus on the momentum of large deals noting the strong trend of the last four quarters, the attrition rate which has remained high, levers to defend margin, talent strategy in the US in light of higher H-1B visa applications in the current year, pricing outlook and BFSI revenue growth momentum.

The Indian rupee strengthened further last week by 60 paise to end at 68.42 against US dollar on optimism amid Union Budget and correction in crude oil prices.

After appreciation in last three weeks, the currency could see some range-bound moves with minor correction in the coming week, given depreciation in other emerging markets currencies, experts feel.

"We are of the view that the pair (rupee-dollar) would find near term support at 68. The rupee would find it tough to gain when other EM currencies are witnessing some depreciation. The pair is likely to trade in the range of 68.0 – 68.90 in the coming week," Amit Gupta of ICICI Direct said.

The oil prices ended week on a negative note with the international benchmark Brent crude futures falling half a percent, settling at $64.23 a barrel amid global growth worries due to volatile economic data.

Experts feel the volatility in crude oil prices is likely to continue for the coming week as well especially after OPEC's decision to extend production cuts and geopolitical tensions, and uncertainty over US-China trade talks, though both countries agreed not to levy new tariffs on each other.

As expected, the OPEC has agreed to extend its production cuts by nine months, to March 2020 to counter the demand growth slowdown. According to the agreement, OPEC has cut production by 1.2 million b/d.

"US-Iran tensions are supporting oil prices. However, global growth worries seem to be the dominant theme as oil prices have shrugged off the OPEC+ deal. However, simmering geopolitical tensions between the US and Iran remain a worry. Any escalation is likely to see a spike in oil prices," Amit Gupta of ICICI Direct said.

According to Rushabh Maru, Research Analyst - Currency and Commodity at Anand Rathi Shares and Stock Brokers, overall, crude oil may be in for a high degree of volatility in coming sessions.

The data for industrial production for May and CPI inflation for June will be released on July 12 after market hours, which will be closely watched by the street.

CPI inflation for May increased to 3.05 percent, up from 2.92 percent in April, driven by an increase in vegetable prices, but it still remained comfortably within the Reserve Bank of India's target level of 4 percent.

The Nifty50 fell sharply on budget day and failed to surpass psychological 12,000 level, though managed to defend 11,800 level, forming large bearish candle on daily chart while for the week, it formed a Shooting Star on weekly scale which implies that selling pressure is seen at higher levels.

"Now next week, market must hold 11,800, otherwise bears will continue to grab their holding. Next support level is at 11,600 for next week and 12,000 being major resistance," Gaurav Garg of CapitalVia said.

Dharmesh Shah, Head – Technical, ICICIdirect said the index has already taken 23 sessions to retrace 90 percent of the previous 11 sessions up move (11,591-12,103), a slower retracement of the previous up move signals a robust price structure and a corrective nature of the current decline.

He believes the Nifty has undergone healthy consolidation by oscillating in the broader range of 12,000-11,600 post exit poll session, helping the index to form a strong base around 11,600 levels.

"The highest Put base for the month is placed at the 11,500 strike, which remains an important positional support. However, for the coming week, the Nifty should find support from 11,700," Amit Gupta of ICICI Direct said.

"Nifty futures premium has shrunk. It has declined from 35 to 12. This translates to profit booking at higher levels. It may take some time for the index to start getting the momentum back," he added.

"Volatility remained lower even after the Budget event and now it started falling down which indicates that participants are not expecting much action or expecting a sideways consolidation till any other trigger doesn't affect the Indian market, Chandan Taparia, Associate Vice President | Analyst-Derivatives at Motilal Oswal Financial Services said. 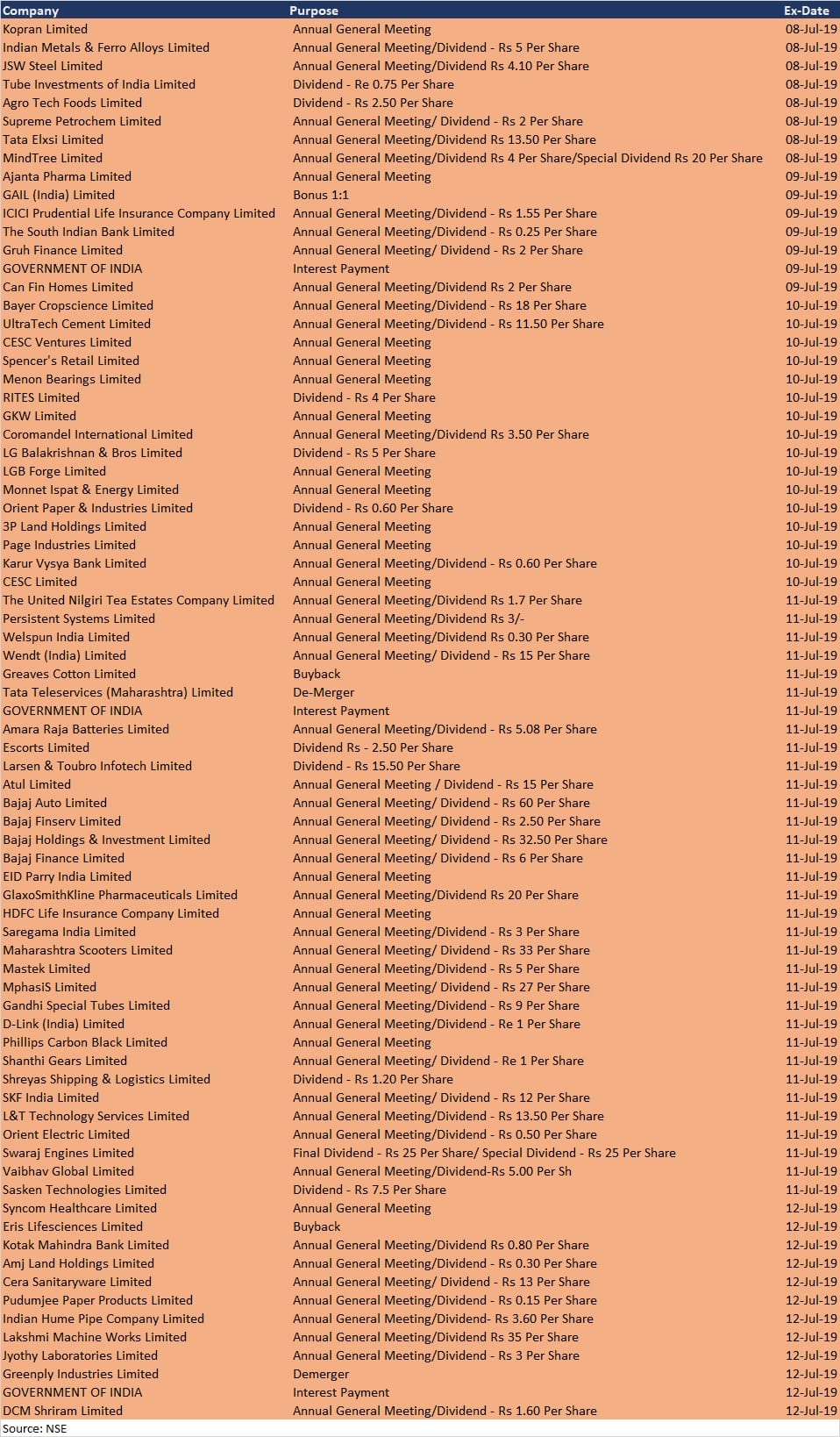