Looking for comfortable returns from your investments? Get into stocks in the domestic footwear market which is poised to grow in double digits in the upcoming years.

Lower per capita consumption, premiumization trend, brand preference and expansion of brands into different distribution channels are expected to catapult the growth of India’s footwear industry in the upcoming years, Elara Capital said in a report.

India’s footwear market continues to grow at a healthy pace at a CAGR of 10 percent over CY15-18 from $5.5 billion to $8.8 billion. In constant currency terms, growth stood at 12 percent, Elara Securities said in a report.

According to the report, healthy growth can primarily be attributed to strong growth in the domestic market.

Growth in the domestic market can be attributed to 1) rising disposable income, 2) premiumization of footwear, 3) increasing penetration of brands led by eCommerce sales, and 4) increased reach on account of a rise in retail outlets.

Elara is of the view that the trend is likely to continue. The footwear industry is a long-term structural story and expected to grow at a CAGR of 14.5 percent until CY21, it said. 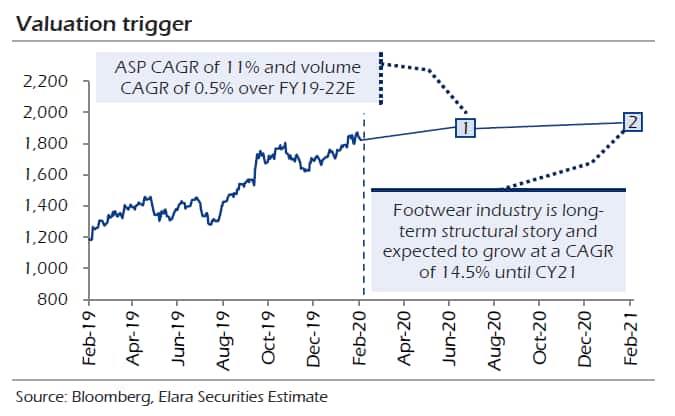 Despite having a global presence, robust supply chain, strong brand awareness, these peers are trading at a discount to Indian peers. “We believe this can be on account of – 1) better future growth rates 2) better return ratios 3) and to some extent in excess in valuations,” the report added.

Elara Capital initiated coverage on Bata India in February with a target price of Rs 1941, and the holding period is 1-year. Bata India has a history of 80 years of operations in India. The company holds nostalgic value for Indians, especially ones born before the 1990s.

“We believe this consumer segment will remain loyal to the Bata brand despite the company’s growing focus toward consumers in the age group of 25-35. With 1,415 stores and 150 franchise outlets as on FY19, the Bata brand is ubiquitous in India,” said the note.

“We believe BATA is a long-term structural story, which will continue to benefit with rising per capita footwear consumption and growing desire for premium footwear,” said the report.

Elara Capital also initiated coverage on Relaxo Footwear with an Accumulate rating with a target price of Rs 787. The stock has already hit the target price in the week gone by, but the long term trend still remains to be on the upside especially for the ones who are already invested.

“We believe Relaxo is in a sweet spot as ~65 percent of overall sales come from categories where ASP is in the range of Rs 55-450. The mass category (ASP less than Rs 500) represents ~50 percent of total footwear sales in India as per RedSeer Report on December 2018,” said the report.

Disclaimer: The views and investment tips expressed by investment experts on Moneycontrol.com are their own and not that of the website or its management. Moneycontrol.com advises users to check with certified experts before taking any investment decisions.
Moneycontrol News
TAGS: #footwear industry #MARKET OUTLOOK #portfolio strategy
first published: Feb 21, 2020 08:11 am