Analysts advise investors to stick to momentum stocks, especially those trading above their long-term moving averages such as their 200-day moving average (DMA)

Though the Sensex climbed Mount 34K and rose 1.7% in the week-ended April 13, the market breadth remained negative for most part of the week, with the advance-decline ratio skewed towards the declines.

Experts see the market remaining volatile in April thanks to escalating tensions in West Asia as well as a rise in crude oil prices which is trading above the $72/bbl mark. Back home, March quarter results from India Inc and Karnataka elections could add to the market volatility.

Hence, analysts advise investors to stick to momentum stocks, especially those trading above their long-term moving averages such as their 200-day moving average (DMA).

Why is the 200-DMA important for traders?

The 200-day simple moving average is more relevant to traders in determining the overall market trend. It is considered as a crucial support for the index or stocks in a falling market scenario.

However, it should not be the only filter used to select stocks to buy or sell. Analysts suggest investors use other technical parameters such as Moving Average Convergence Divergence (MACD), Relative Strength Index (RSI), Supertrend Indicator, among other momentum indicators before placing one’s bet. 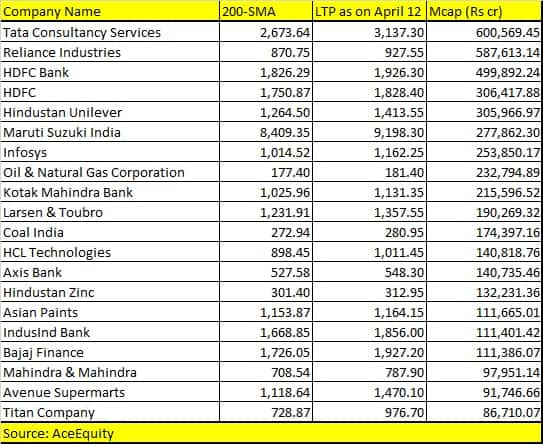 Road ahead for the Nifty

The Nifty retested its crucial 200-DMA in March but managed to close above this crucial level at the start of April. If the Nifty retests its 200-DMA again on escalating geopolitical tensions, then market watchers see a higher chance of a retest of 10,100-10000 levels.

“The index remained below its 200-DMA only for a couple of days and then bounced back. A problem will arise in the long-term trend if the index settles below its long-term average a longer period of time,” Mazhar Mohammad, Chief Strategist – Technical Research & Trading Advisory, Chartviewindia.in, said.

“Despite the Nifty testing its long-term average, some stocks bottomed out ahead of the market. Thus, sending a message that they have reached some sort of ‘value zone’ which attracts the attention of long-term investors,” he added.

Mohammad advises investors to stay focussed and remain invested as despite the carnage witnessed in February and March, some stocks still hit new lifetime highs.