30 stocks that mutual funds bought and sold in December across large, mid & smallcaps

Total outflow in last six months now stands at around Rs 33,000 crore and the profit booking could be a key reason for the same.

Equity mutual funds schemes continued to see the outflow of funds for the sixth consecutive month in December 2020, though foreign inflow resilient. Mutual funds net sold Rs 26,513.74 crore worth of shares, while foreign investors pumped in Rs 53,499.66 crore, the second-largest monthly inflow, as per the Sebi data.

As per Sebi, mutual funds have consistently been net sellers since June last year and they cumulatively offloaded Rs 1.05 lakh crore shares from June 2020 till January 2021.

As per the data released by the AMFI, December saw the highest ever outflow at Rs 17,700 crore excluding NFOs. Total outflow in the last six months now stands at around Rs 33,000 crore and profit-booking could be a key reason for the same.

The market nearly doubled from March lows to hit a fresh record high. The broader markets not only participated in the rally but also managed to beat the returns of the frontliners.

"The continuation of net outflows from equity funds could be attributed to profit-booking/portfolio rebalancing as markets continue to touch new highs. In fact, the net outflow number would have been higher had it not been for the NFOs across multiple equity categories which collected Rs 7,600 crore," Himanshu Srivastava, Associate Director – Manager Research at Morningstar India said.

"While the gross purchase (new investments) was lower in December than the previous month; gross redemptions at Rs 36,220.28 crore were significantly higher than Rs 27,113.18 crores in November. This also suggests that investors looked to book profits given the higher market valuations," he added.

ICICI Direct listed the 10 stocks each from large, mid and small-caps segments which witnessed the highest buying and selling by mutual funds in December. 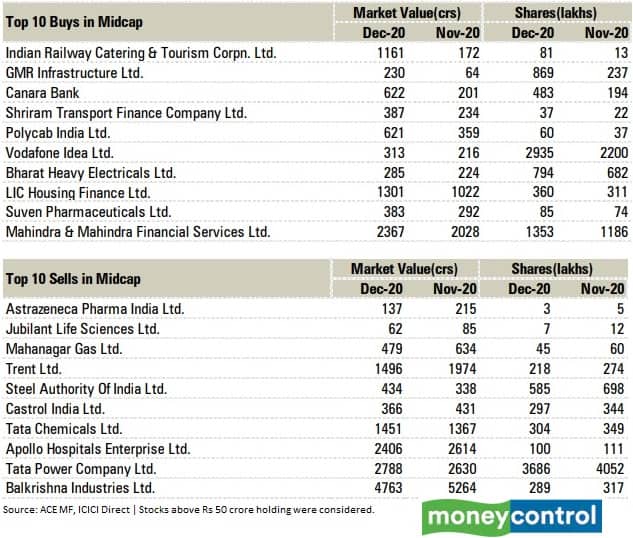 "Outflows were witnessed across equity fund categories except for Dividend Yield and Sectoral/Thematic Funds categories, given both these categories saw the launch of new funds, which managed to garner investor interest. Largecap and Multicap categories were the worst hit during the month. These two categories together witnessed a net outflow of Rs 7,417.16 crores in December," said Himanshu Srivastava.

The SIP inflow in December stood at Rs 8,418 crore which was far better than the previous few months. In fact, December saw inflow above Rs 8,000 crore for the first time since May last year. The SIP contribution in November last year stood at Rs 7,302 crore signifying a 15 percent MoM growth.

Disclaimer: The views and investment tips expressed by investment expert on Moneycontrol.com are his own and not that of the website or its management. Moneycontrol.com advises users to check with certified experts before taking any investment decisions.
Sunil Shankar Matkar
Tags: #Market Edge #MF News #Nifty #Sensex
first published: Jan 20, 2021 01:27 pm