On a year-to-date basis, the broader market indices have underperformed benchmark indices in the same period. But, recent rally suggests that the momentum has slightly shifted towards smaller players as well.

While March has been all about market recovering from its February lows, bigger gains have come in small packages with smallcaps outperforming the benchmark indices.

The S&P BSE Smallcap index is up 7.8 percent so far in March as compared to 6.1 percent rise in Nifty50, and 6.4 percent rally seen in the S&P BSE Sensex. Meanwhile, the S&P BSE Midcap index gained 5.2 percent in the same period.

However, on a year-to-date basis, the broader market indices have underperformed benchmark indices. But, recent rally suggests that the momentum has slightly shifted towards smaller players as well. 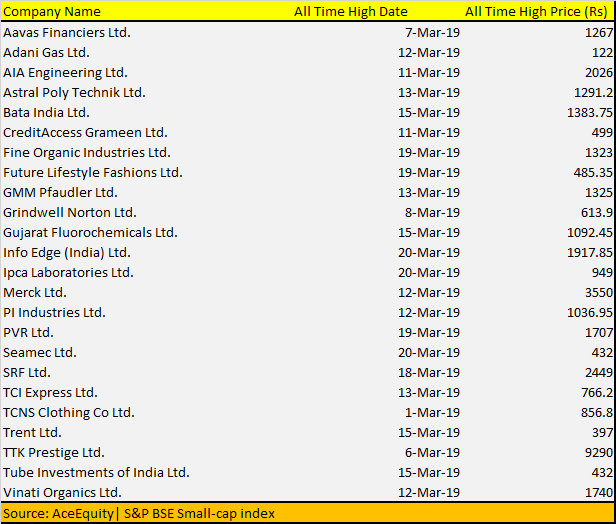 In the S&P BSE Midcap index, as many as 6 stocks touched their record highs in March.

What led the rally?

After the correction seen in 2018 and 2019 so far, valuations have become fairly attractive, and the second reason which is supporting the rally is strong institutional flows, suggest experts.

“The relative valuations of midcaps versus largecaps are at a historically low level, both at an absolute level as well as on a rolling basis, with 7-DMAs at 2014 levels. With four-year midcap–largecap premium practically wiping out, we now believe that valuations are reasonable to support midcap recovery,” Elara Capital said in a report.

“We expect strong FPI flows in CY19 taking into cognizance (a) pause in Fed rate hikes which in effect weakens the dollar index and makes EMs more attractive for FPI flows; (b) attractiveness of India relative to other EMs in a challenging global growth environment – India which is a consumption-led economy is well placed unlike other EMs which export mainly to China; and (c) earnings recovery which is around the corner,” it said.

Should you buy mid & smallcaps which are hitting highs?

Momentum drives price and if the momentum is with stocks which are hitting fresh record highs, yes the trend will sustain. It makes sense now for investors to dip into selective mid & small caps, but stock selection remains the key.

Experts advise investors to be selective because as soon as the liquidity dries out the demand for mid & smallcaps might also get wiped out.

“Broadly, mid and small-cap stocks have risen very quickly after experiencing a massive fall from January last year. The thrust was very powerful but now corrections will be equally fast because during corrections demand evaporates quickly which lead to a deeper correction,” Umesh Mehta, Head of Research, Samco Securities Ltd told Moneycontrol.

“At 50 percent retracement levels of the current rally, mid and smallcaps will offer a good buying opportunity. Placing bets when the indices have already run up won’t provide a margin of safety,” he said.

In terms of technicals, the NSE Midcap index has consolidated around its long-term average for the past eight trading sessions and the index has moved up significantly after testing its 200-week moving average over the past five weeks.

“From a relative strength perspective (RSI), NSE Smallcap index displays better strength. Considering the behaviour of these indices against the benchmark, one must be very selective and trade in qualitative stocks,” Arun Kumar, Market Strategist, Reliance Securities told Moneycontrol.