Adani Group stocks have had a volatile run this week.  The stocks took a hit on June 14 after media reports said the National Securities Depository Ltd (NSDL) froze accounts of three foreign funds that were among the top stakeholders in the port-to-energy conglomerate, which denied such a development.

The next day the stocks rebounded after NSDL said the accounts remained active but mild selling pressure continued on June 16 amid a broader selloff on D-Street.

NSDL has indeed frozen accounts of the three foreign funds—Albula Investment Fund, Cresta Fund and APMS Investment Fund—but that pertains to some specific accounts and happened way back in June 2016.

The accounts were frozen on the orders of the Securities and Exchange Board of India (SEBI) in an unrelated case and have nothing to do with Adani Group companies, a senior NSDL official told Moneycontrol.

The reports of "frozen accounts" caused a stir and were being watched with a great deal of interest as the group as an extensive set of foreign investors.

As many as 556 global funds are invested in six Adani Group stocks, whose market value is roughly $3.52 billion, data compiled by Morningstar India shows.

As many as 286 domestic funds have cumulatively invested in Adani Group companies with a total market value of $0.450 billion. Morningstar data shows that the total exposure of both global and domestic funds stands close to $3.9 billion.

(Note: The portfolio disclosure norms for global funds are different. The market value for the international/global funds shared is based on data available on Morningstar’s system. Some of these exposures could also be backdated by a few months.)

Here is a list of the number of funds both domestic and global which have invested in the Adani Group companies: 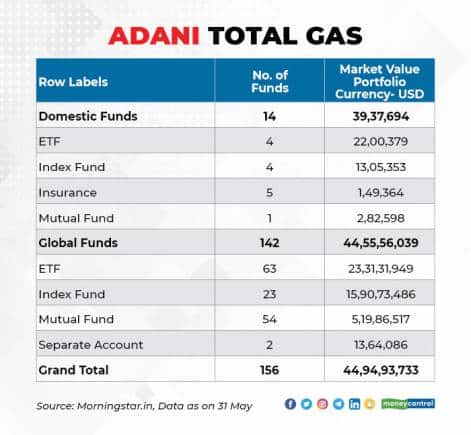 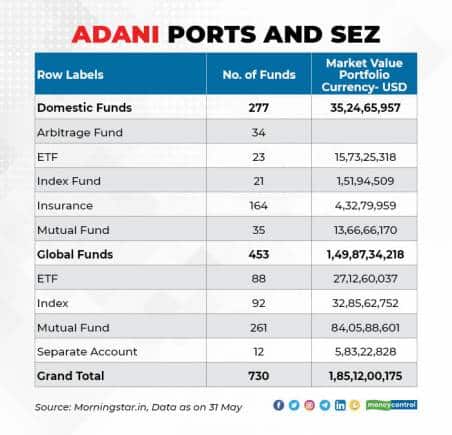 Disclaimer: The views and investment tips expressed by experts on Moneycontrol.com are their own and not those of the website or its management. Moneycontrol.com advises users to check with certified experts before taking any investment decisions.
Moneycontrol News
Tags: #Adani Group #global funds #Market Edge #MARKET OUTLOOK #Nifty #portfolio strategy #Sensex
first published: Jun 17, 2021 09:48 am