Historically, bulls have controlled the D-Street in the last six out of ten years in the month of June

‘Sell in May and go away’ turned out to be true this year and now all eyes are on June. Anecdotal evidence suggests that bulls managed to get an upper hand over bears in the last 10 years in the month of June.

Historically, bulls have controlled the D-Street in the last six out of ten years in the month of June, data from AceEquity showed. Benchmark indices have rallied more than 20 percent from the low of 7,500 recorded in the month of June, but the Nifty50 is facing resistance near 9,600-9,800 levels.

Nifty50 picked up momentum in the last week of May, but it failed to close above 9,600 towards the close of the month. But, strong rollovers for the June series suggest that the index could have a touch and go moment with 10,000.

However, it is unlikely that the momentum will sustain largely on account of the rise in COVID-19 relation infections which are on the rise across the world, as well as the US-China trade dispute.

But, reopening of the economic activities to a certain extent, as well as hopes of a stimulus package from central banks across the world could lend support. Analysts still remain divided on the direction the market would take.

“The winner from the Bull Vs Bears tussle for June will depend on India’s policymakers and if they continue to extend the lockdown,” Umesh Mehta, Head of Research, Samco Securities told Moneycontrol.

“Opening of the lockdown in a phased manner could lead to some stabilization, and benchmark indices will experience a relief rally. However, investors should not buy into this rally as it can be very short-lived and risky,” he said.

On the weekly charts, the Nifty formed a bullish candle which indicates that for the short term Nifty might move to the next resistance levels at 9,700 and 9,850 and on the downside 9,400 and 9,350 will be the support levels.

“The June series has started well with a positive note but the ongoing conditions like US-China diplomatic issues, ending of the lockdown 4.0, and India-China border tension may keep the market volatile,” Gaurav Garg, Head of Research at CapitalVia Global Research Limited – Investment Advisor told Moneycontrol.

Garg further added that at the same time lockdown 4.0 is ending on 31st May, and how the government reacts to the present conditions may keep the investors busy throughout the series.

Foreign institutional investors (FIIs) have been net buyers in June in seven out of the last 10 years, according to data from AceEquity. 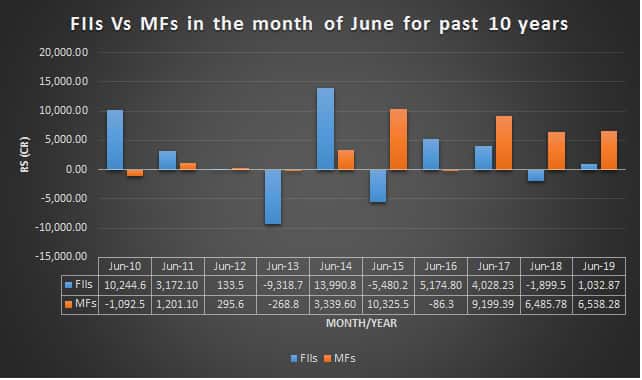