After a consolidation over three weeks, the market finally gathered steam to hit historic highs during the week that ended on November 29. It was driven by the hope of more government measures to boost the economy, a likely rate cut by the Reserve Bank of India (RBI) and positive developments over US-China trade deal. Consistent FIIs buying in liquid large and midcaps also lifted sentiment.

But, the selling pressure in Friday's trade due to caution ahead of Q2FY20 GDP, which was at a more than six-year low of 4.5 percent, and rising risk of retaliation from China, limited upside of the market.

First, the market will react to the auto sales and GDP numbers. The volatility is expected to be seen in the coming week as all eyes are on the RBI policy and more developments related to US-China trade deal, though overall trend remains positive, experts feel.

"Currently Nifty50 is trading at one year forward P/E of 19x & 26x on 12-month trailing basis which does not provide much room to perform well. Given this scenario, we may see a limited upside in the key indices, while investors will start focussing on quality mid and small caps. For the week ahead, November's auto sales and the RBI policy meet next week will influence the market. Main indices performance will be tepid," Vinod Nair, Head of Research at Geojit Financial Services told Moneycontrol.

Ajit Mishra, VP - Research at Religare Broking said the recent feud between the US and China over Hong Kong could induce volatility in the global markets. "Amid all, we reiterate our bullish view and suggest continuing with a stock-specific trading approach," he added.

The BSE Midcap and Smallcap indices outperformed frontliners, rising 2.35 percent and 1.55 percent respectively for the week that went by.

The key event of the coming week would be three-day Monetary Policy Committee meeting that will begin on December 3 and the interest rate decision will be announced on December 5.

Considering the low economic growth, and a weakness likely to be continued to be seen in Q3FY20 GDP, the street largely expects the RBI to cut the repo rate by another 25 bps and continue with its accomodative stance.

Following the slowdown in GDP growth in Q2 FY20, the contraction in the core sector output has deepened sequentially in October 2019.

"Therefore, we anticipate that the Committee would reduce the repo rate by 25 bps in the December 2019 policy review to support economic growth, looking through the vegetable price-led uptick in the CPI inflation in October 2019," Aditi Nayar, Principal Economist at ICRA told Moneycontrol.

Prabhudas Lilladher also said that with the output gap widening, he expects the MPC to cut the repo rate by another 25bps on December 5. However, he believes that a sustained uptick in food inflation (deflationary base) is likely to pose a challenge to the RBI on account of a higher repo rate cut.

Globally, investors continued to eagerly await the partial trade deal between world's largest economies US and China, but the rising risk of retaliation from China after the US signed two bills in support of Hong Kong protesters raised uncertainty over that trade deal. As a result, US stocks corrected around half a percent on November 29, following a decline in the Asian markets.

"China firmly opposes Hong Kong Act. We have made stern representations and strong protests to US. It is a stark hegemonic practice and a severe interference in Hong Kong affairs, which are China’s internal affairs. China will take strong counter-measures," reports CNBC quoting Geng Shuang, a spokesman for the Chinese Foreign Ministry on November 29.

A Reuters report cited two sources saying the US government may expend its power to stop the further shipment of products with US technology to China's Huawei over the frustration of blacklisting having failed to end supplies to the world's largest telecoms equipment maker.

Geng Shuang did not mention about counter-measures, but it definitely raises doubts over the forthcoming trade talks meeting likely to be held in mid-December.

Experts feel if both countries failed to sign the deal by mid-December, then the US would continue with additional tariffs on Chinese products.

The Nifty Auto index already fell more than a percent on November 29 ahead of sales data that were expected to be mixed with weakness in 2-wheeler and commercial vehicle segments, and limited the week's gains to 0.64 percent.

Recently, Bharti Airtel and Vodafone Idea announced that they would announce tariff hikes with effect from December 1, while Reliance Industries, on November 19, said it would increase tariffs in next few weeks.

Hence, the street will closely watch the quantum of tariff hikes by these companies as it will help analysts to recalculate their earnings estimates.

Sources told CNBC-TV18 on November 29 that the hikes could be staggered and implemented over a period of time.

The hikes will depend on circles, plans and services, said the sources, on the condition of anonymity, adding that while the increase in the prices will start from 8 to 10 percent, in some select cases, the rise could be between 25 to 30 percent.

The initial public offering of Ujjivan Small Finance Bank, a subsidiary of NBFC Ujjivan Financial Services, will open for subscription on December 2, with a price band of Rs 36-37 per share.

All brokerages advised subscribing to the issue for listing gains as well as for the long term, given the bank's stable asset quality with higher provisioning that resulted in higher return ratios, growth in advances and deposits, expansions plans, corporate governance etc.

On December 4, Kerala-based CSB Bank, formerly known as Catholic Syrian Bank, will debut on the bourses after raising Rs 410-crore through a public issue that saw a massive subscription of 87 times.

Given the strong subscription and the new management that engineered a remarkable turnaround, most of analysts expect the stock to list with at least Rs 50 premium over final issue price of Rs 195 per share.

The ministerial meeting of Organisation of the Petroleum Exporting Countries (OPEC) and non-OPEC, which is scheduled to be held on December 6 in Vienna, Austria, will be closely watched as it would impact oil prices.

There are lot of expectations, but most analysts expect the ministers to maintain status quo and extend the current oil production cut of 1.2 million barrels per day till June 2020.

"OPEC seems to have no appetite to cut oil production deeper when it meets next month as the US is scooping up the market share, and a rollover looks more likely till June 2020. We expect uneasy talks in December as with so much uncertainty, OPEC and the oil ministers will have little difficulty in convincing themselves to extend current arrangement until June and to revisit the situation once winter has passed," Motilal Oswal said.

As per CME, the probability of the OPEC+ maintaining the output cut policy at its December meeting stands at 81.51 percent, and consensus for further output cuts is seen at a meagre 8.23 percent, while there is a 10.26 percent chance of the OPEC+ increasing its output, the brokerage added.

Meanwhile, Saudi Aramco will close its initial public offering on December 4 and the final price for IPO will be announced on December 5. The issue, so far, has received bids for over $44 billion worth of shares, i.e. 1.7 times the value it aims to raise by selling 1.5 percent stake.

The Nifty50 formed a Bearish belt hold kind of pattern on daily charts Friday, but there was a bullish candle formation on weekly scale. The index has managed to close above the previous week's high also suggests bulls are active on the lower side.

"Bulls will continue to cheer this rally by pushing the Nifty towards a new high. At the same time, a decisive close above 12,150 levels will open the gates of the new zone that can be easily extended towards 12,400 level. Whereas the lower side supports lies around the line of parity standing at 11,800 levels," Shabbir Kayyumi, Head of Technical Research at Narnolia Financial Advisors told Moneycontrol.

Option data suggests that there has been a shift in the trading range for the Nifty between the 11,900 to 12,300 level.

India VIX fell by 6.52 percent from 14.87 to the 13.90 level during the week. Lower volatility suggests that the overall bias could remain intact with buying may emerge on declines, experts feel.

"The Nifty posted almost 140 points of gain in the last week from 11,900 and made 11,900 strike the second highest Put base of December series. We expect the index to trade with a positive bias above these levels. It is likely to eventually move up to 12,300. The contracting IV is likely to attract further OTM Put writing," Amit Gupta of ICICI Direct said.

Here are corporate actions taking place in the coming week: Among macro data points, Markit Manufacturing and Services PMI for November will be released on December 2 and 4 respectively.

Apart from US-China trade deal developments and OPEC+ meeting, here are other global data points to watch out for in coming week: 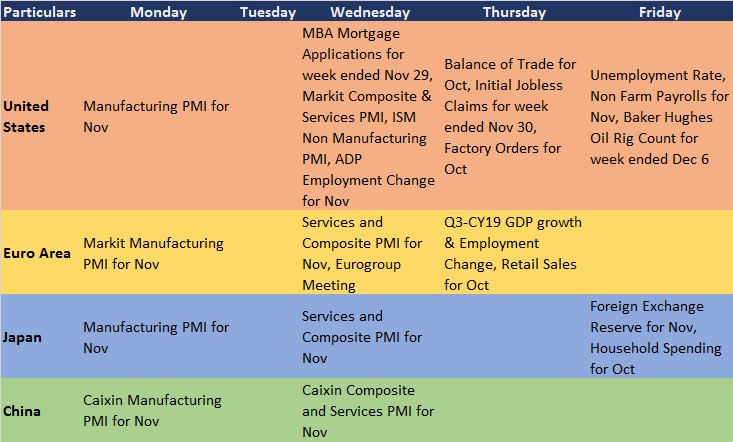