Mahindra Finance vs Shriram Transport: Which rights issue should you choose?

Shriram Transport Finance has taken the traditional approach--money I need, offer a discount and set the ratio. In comparison, M&M Financial has priced the offer at a steep discount to market price

Mahindra & Mahindra Financial Services, and Shriram Transport Finance--both leading non-banking finance companies - are in the market for funds to shore up their balance sheets battered by the COVID pandemic.

Both financiers have chosen to tap their existing shareholders through the rights offer route, while positioning it differently.

Shriram Transport Finance has taken the traditional approach--money I need, offer a discount and set the ratio. In comparison, M&M Financial has priced the offer at a steep discount to market price so that the issue sails through. What’s not so smart, is the company positioning it as a “reward” to shareholders.

Why? Because by definition, a reward is “a thing given in recognition of service, effort, or achievement”.  So asking people for money goes against the “giving” nature of a reward. Most importantly,  discounted or even free shares are never a reward, though most companies make it as seem as they though they are doing shareholders a favour.

When a company offers a bonus share or splits its shares or offers rights shares at a steep discount, it is only looking to increase its market capitalisation from the behavioral biases of stock market players.

Traders and even experienced investors will drive up stock prices, thinking them to be cheaper when the stock price declines to adjust for the additional shares. Fundamentally, nothing changes.

The money you invest in the rights gets added to the company’s networth and in Mahindra Finance’s case, doubles the equity capital. Because there are twice as many shares as before, the book value per share will halve. So, dear shareholders, there is no reward. In fact, if the company had offered shares in the ratio of 1:2 (one rights share for every two owned in the company) at Rs 100 per share, the outcome would have been exactly the same.

Let us look at each of the offers.

If one takes into account the ex-rights price of about Rs 140, and assume a holding of 100 shares, the immediate net gain from investing in the rights offer (assuming the shares continue to trade around these levels) is about Rs 600, when compared to the last cum-rights day’s price.

A similar math for the Rs 1500 crore rights offer from Shriram Transport Finance, indicates a loss of about Rs 3,000. And if you cash your rights entitlement, the loss remains almost the same. The math is shared below. Given the risk-reward, a prudent move for both offers will be to sell the rights entitlement--this you can still do for Mahindra Finance, but if you haven’t already for Shriram Finance, you’ll need to subscribe.

Here's why you can give both issues a pass. In its Financial Stability Report, an authority no less than the Reserve Bank of India has warned of the risks to the financial system. That is because a lot of businesses suffered huge losses during the nationwide lockdown, and still continue to lose money because economic activity has not resumed fully.

And when many of these businesses fail to repay their loans, the bad loans in the banking sector will rise. RBI expects bad loans as a percentage of the total loan book of the industry to rise to 12.5 percent by March 2021, compared to 8.5 percent at the end of March 2020.

That’s a huge spike. And that’s just the base case scenario. The RBI’s severe stress scenario estimates NPAs at a still higher 14.7 percent. And, that’s the case for banks. Non-banking finance companies with less sound borrowers could suffer even more.

And banks and NBFCs will need to shore up capital to counter the stress—as many are doing—and so much of the money will go into filling the holes caused by these bad loans, instead of lending to businesses.

The RBI has said that NBFCs will find it harder to raise funds, compared to banks.

“The declining share of market funding for NBFCs is a concern as it has the potential to accentuate liquidity risk for NBFCs as well as for the financial system”.

So, Mahindra Finance and Shriram Transport Finance are being prudent by building up their cash reserves and equity buffers, but don’t expect borrowers to be queueing up for loans anytime soon.

Already, the general economic slowdown has hit the transport sector hard. Shriram Transport Finance, which offers loans to people wanting to buy commercial vehicles (buses and trucks) is not getting enough customers, and this is reflected in the fewer loans they have been disbursing.

Initially, there were signs that the rural market was beginning to recover, because of strong demand for tractors, two-wheelers, and consumer staples like soaps, biscuits, shampoos, among others. But now experts are beginning to doubt the strength of the recovery.

Recently, both Credit Suisse and Technopack told CNBC-TV18  that the rural consumption story and recent buoyancy looked unsustainable. That is because a lot of demand had to do with migrant workers returning to their villages. But there aren't enough work opportunities in villages so spending is bound to drop and these workers will eventually head back to cities.

Outlook for the agri-sector seems bright if you were to look at things three years from today, thanks to government's recent initiatives. But a lot can and will happen in the intervening period. Given this backdrop, now let’s consider the company specifics.

Before we get into the numbers, let me warn you that this is one more reason why I’m not a great fan of financial stocks. The die is loaded against them. To raise deposits, these players have to compete with government-backed small savings schemes (which are a necessity to bridge the fiscal deficit). An underdeveloped corporate market is not a good enough alternative for NBFCs to borrow cheap.

And were borrowers to default on their loans--intentionally or because of the business environment--recovering the money is a long drawn process. And while the Insolvency and Bankruptcy Code helps, it isn’t a cure all. So, business is tough, and those who are able to retain creditworthy customers, will win. In this context, the going is set to get even tougher for NBFCs as banks start invading their bastions and poach the better borrowers by promising them lower rates.

Now the numbers. Most banks and NBFCs fare poorly when it comes to return-on-equity. The best-in-class bank, HDFC Bank, clearly stands out on this count. Kotak Bank is next with a decent and consistent return. Bajaj Finance is an NBFC that has clocked healthy returns. Even Shriram Transport Finance hasn’t fared badly. The big underperformers in our peer set are Mahindra Finance—with an erratic ROE and a 5-year average of just 10.88 percent--and State Bank of India with sub- 7 percent returns for each of the last five years. The objective of a business is to earn a healthy return on capital and if a company can’t do that, it is a very telling statement. ICICI Bank too has performed poorly in the past few years, but given the governance issues at the bank and the consequent management transition, it may be unfair not to offer some more latitude to the incumbent to deliver.

If we look at some of the levers for the ROE, the picture gets clearer. For a financial business, how many times the networth it is able to borrow what it earns on those borrowed funds decides the returns it can deliver to shareholders.

Here, it is important to point out that different rules apply for banks and NBFCs on capital requirements and other liquidity buffers. But as an investor you should only be worried about the final outcome: returns. A quick look at the Assets-to-Networth ratio for private banks reveals that they borrow 7.5-10 times their networth. And at this level of leverage, a 1.9-2.0 times Return-on-Assets (RoA) translates into a healthy ROE for HDFC Bank and Kotak Bank. ICICI Bank fares poorly with a similar leverage due to a low RoA. In SBI’s case this return is even lower and negates its high leverage. 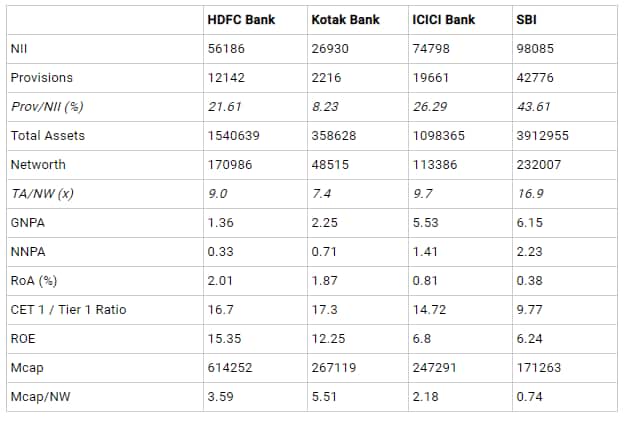 What also hurts SBI is its high provisioning to Net Interest Income ratio—or the amount it needs to put aside to cover possible defaults from the net interest it earns after meeting its interest costs. While the numbers indicated here are for the last fiscal ended, and include prudent COVID provisions, this is true for all the lenders.

Now let’s look at the NBFCs. Their leverage is far lower, also due to regulatory restraints, at between 4-6 times their networth, so they need to earn a higher RoA on their assets to deliver a decent ROE. Their margins also need to be stronger for them to accommodate their relatively higher provisioning, meet operational expenses and deliver profits. Here again, Bajaj Finance stands out as the best-in-class, which helps it deliver better ROE with lower leverage.

The laggard again is Mahindra Finance with a low RoA of 1.3 percent. In fact, its average RoA over the past 5 years is just 1.78 percent. A look at the market capitalization of the NBFCs to their networth (or price to book value, if you will), shows that Bajaj Finance is clearly valued at a premium because of its financial credentials. What it also indicates, is that with the ratio at greater than equal to 1x at current market prices for the stocks of the two their rights issue offering NBFCs, the prospects may not be particularly exciting. Remember, stress in the system is set to rise, says RBI and the more capital efficient banks are looking to steal their business in an environment when credit flow is sluggish.

The financials of NBFCs will likely see pain showing up sooner or later, and that isn’t going to be a good time to stay invested. And giving your money to them, so that they can clean up their balance sheets doesn’t sound like the best use for your money. There are better companies in the pond that can deliver higher compounded returns, so there’s no reason to be invested in financials. And if you really must, opt for the banks. A telling indication here is past stock market returns of these NBFCs versus the Bank Nifty and the best-in-class, HDFC Bank. With this I rest my case.