UPCOMING EVENT:Special webinar on Highlights of global investing in 2021 and what lies ahead' at 2 pm on 21st January, 2022. Register Now!
you are here: HomeNewsBusinessIPO

After fixing of the price band, which is much lower than the market price, the stock has lost 22 percent.

After fixing of the price band, much lower than the market price, the stock has lost 22 percent and was trading at around Rs 20.7 on July 14.

The bank plans to raise Rs 15,000 crore through the further purchase offer that opens on July 15 and closes July 17.

Shares worth Rs 200 crore have been reserved for subscription for the bank’s employees. An FPO is a process by which a listed company raises fresh capital by issuing new equity shares to the public. Bids can be made for minimum 1,000 shares and in multiples of 1,000 shares thereafter.

The bank, in consultation with its merchant bankers, has fixed a price band of Rs 12–13 per equity share, a discount of 53 percent – and 49 percent to its July 10 closing.

Yes Bank intends to use proceeds towards ensuring adequate capital to support its growth and expansion, including enhancing its solvency and capital adequacy ratio.

The issue opened for anchor investors for on July 14. The bank may, in consultation with the book managers, allocate up to 60 percent of the QIB (qualified institutional buyer) portion to anchor investors on a discretionary basis. Hence, the QIB portion will accordingly be reduced for the equity shares allocated to anchor investors.

The bank has a presence in all the 28 states and in eight union territories of the country. It has a representative office in Abu Dhabi as of March 2020. It is a full-service commercial bank specialising in merchant banking, digital banking, brokerage business, asset management and investment banking.

"The increase in NPA as a consequence of additional slippages and increase in PCR has resulted in higher provisioning and a loss in our results for fiscal year 2020," the bank said.

The lender reported a profit of Rs 1,709.26 crore in the previous year.

Net interest income during the year fell sharply by 30.8 percent to Rs 6,793.96 crore compared to the previous year. 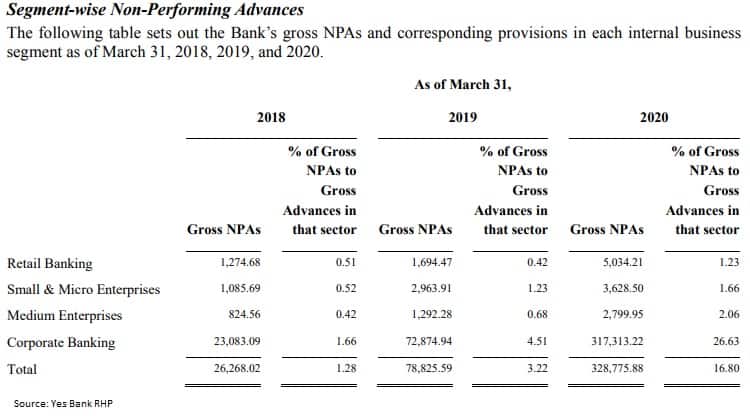 Public shareholding in the bank stood at 98.58 percent as of March 2020, of which country's largest lender State Bank of India held 48.21 percent stake.

Under the reconstruction scheme, drawn up by the Reserve Bank of India, SBI is required to hold not more than 49 percent and not less than 26 percent of the total equity shares in Yes Bank. which is subject to a three-year lock-in from March 14, 2020.

Other investors are subject to a three-year lock-in from March 13, 2020 for 75 percent of the investments they made in the bank .

Prashant Kumar, the ex-DMD and CFO of State Bank of India, is the Managing Director and Chief Executive Officer of Yes Bank.

Yes Bank's new management has set the objective to rebuild the bank and calibrate growth over the next six to twelve months by rebuilding liabilities and liquidity buffers, optimising cost, strengthening the governance and underwriting framework, and focusing on stressed assets resolution.

Its medium-term objectives are:
(a) Stabilise liability mix and lower cost of funds with an aim to increase CASA ratio to more than 40 percent
(b) Provide granular advances, with retail, small and medium enterprises being more than 60 percent
(c) Enhance corporate flows and cross-selling through transaction banking

As of March 2020, Yes Bank had three subsidiaries--YES Securities, YAMIL and YTL.