Scenes from Paytm's listing: Laughter and joy amid falling shares

Vijay Shekhar Sharma's masterful showmanship could not stop fintech firm Paytm's shares from falling on public debut in a white-hot market. Here's what it felt like at the BSE to witness a historic IPO, even though emotions and reality were poles apart.

Paytm's public listing was just like the rest of its existence: tremendous excitement for a business that still raises eyebrows.

Even though shares of Paytm parent One97 Communications listed 9% lower—at Rs 1,950 apiece—than the price quoted during the share sale, the mood at the Bombay Stock Exchange was nothing but hyper-enthusiastic.

Investment bankers and Paytm executives were congratulating each other. Two senior bankers could be seen exchanging chuckles, with one saying, “I can't believe we pulled this off.”

The festive mood was heightened by the decoration leading up to the BSE International Convention Hall. A dark blue stream of lights resembling a gaming arcade lead to the hall, where the stage was laden with white and yellow flowers. The trading hall where once traders used to scream, shuffle and tear each other's clothes trying to get a trade in, is now a sophisticated scene where people in suits grin and celebrate a much-anticipated moment.

But even the palpable excitement paled before the frenzy that accompanied Vijay Shekhar Sharma’s entry. Swathes of people moved towards the Paytm founder, and from the moment he entered to even an hour later, he was surrounded by dozens of people.

“I'm loving the mood. Bilkul shaadi jaisa lag raha hai (It feels just like a wedding),” Sharma quipped. The master of one-liners, punch lines, and pithy quotes even on a normal day, Sharma revelled in the glory of his big day. 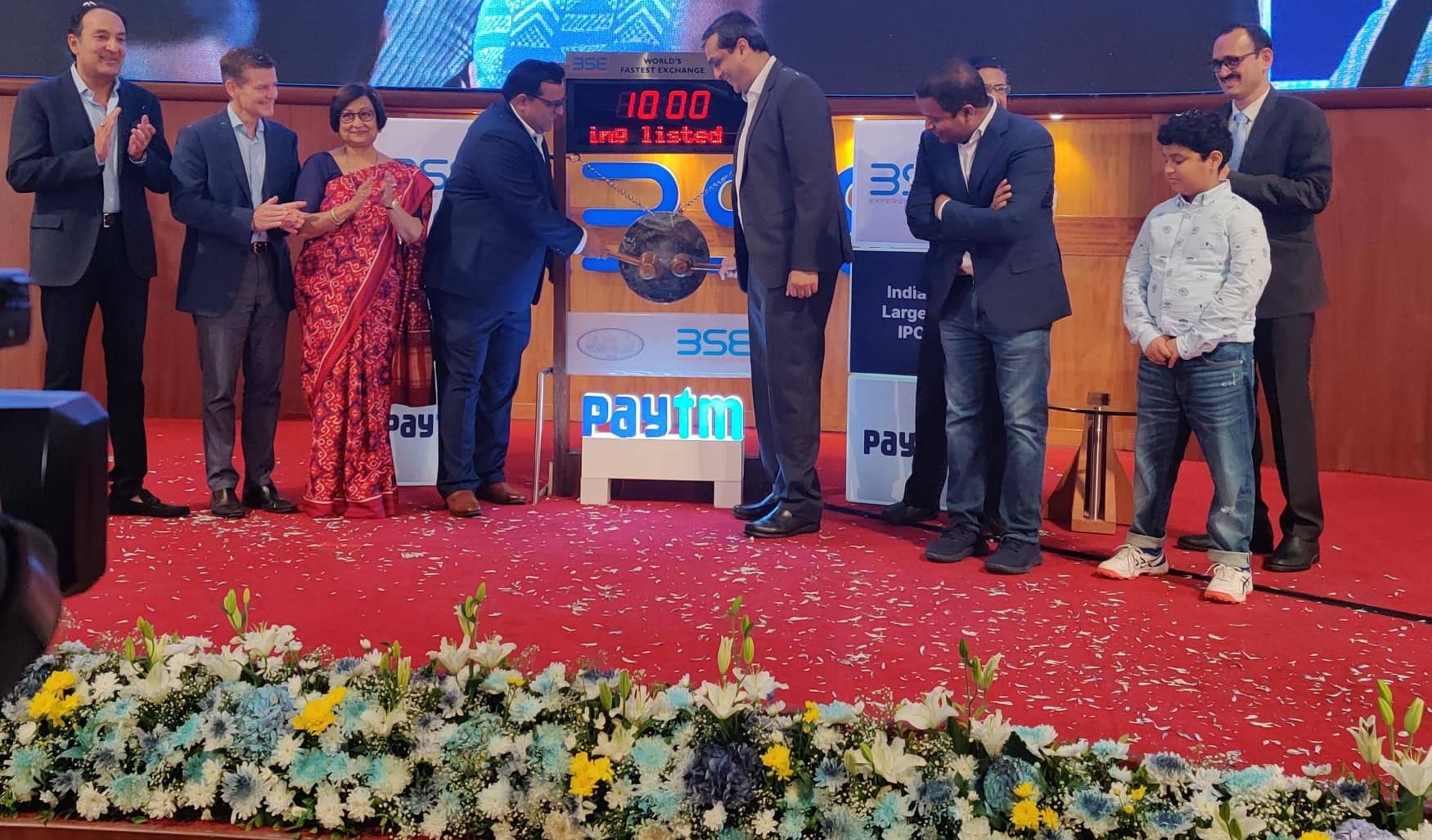 The wedding comparisons continued later on too, when Sharma and Madhur Deora, Paytm's chief financial officer, walked towards the stage. “We are the dulha and dulhan (groom and bride), so we'll come from that side,” Sharma laughed.

“Yaar, shehnai vagera bajao, (play the clarinet, guys),” a Paytm executive chimed in from the back.

Paytm's investment bankers, who earned Rs 323 crore from the initial public offering (IPO) —Morgan Stanley and Goldman Sachs, among them—took pride in their early interactions with Sharma, showing how far he has come.

Kamal Yadav, India head of investment banking for Morgan Stanley, said that he first met “Vijay, 13 years ago, when he was thinner and I had more hair on my head”.

Sharma's pre-listing speech was preceded by the national anthem. It set the right tone, as an emotional, teary Sharma walked on to the stage.

“Bharat bhagya vidhata”, words in the national anthem, translate to “the one who will define the fortunes of this country”, and “Paytm has done exactly that”, the Paytm founder and CEO said, holding back tears. His breath was audible, feelings visible to the hundreds at BSE.

Sharma addressed the usual bemusement that follows Paytm's massive funding rounds—higher and higher valuations for more and more losses, for a company that's neither growing nor a market leader in many segments, as its critics allege.

“People ask me how I raise money at such high prices. I say that I never raise money on the price, I raise it on purpose,” he said.

Sharma struck the BSE gong repeatedly to officially signal the start of trading, an iconic moment for any company. His investors, including SoftBank's Munish Varma and Elevation Capital's Ravi Adusumalli (who Sharma refers to as Paytm's cofounder), also took turns posing with the gong and striking it. The gong's chime could be heard even half an hour after the official listing, such was the playfulness.

And yet, reality interfered with the festive mood soon enough, to some extent at least.

Paytm’s shares started trading at 9% below its proposed price and plunged as much as 20% in the next hour. Most people in the room, however, did not know or did not care, and in some cases pretended not to care.

“It's obviously not good. That too for such a hyped IPO. I don’t know what to say. But it’s still early. It could end at a higher price. Let’s see,” an investment banker said on the sidelines.

Paytm's shares traded at a discount in the grey market earlier, an ominous indicator of how the stock would perform later. Yet, many people at BSE did not even know that the shares fell, because unlike previous IPOs such as Policybazaar last week, Paytm did not have a price indicator in the room. Prescient, you would think.

When this reporter informed a Paytm investor about the price, “It's okay yaar (buddy), it’s a long journey,” the investor mused.

The stock performance did not dampen the mood even a touch. You could hear peals of laughter from groups of bankers, lawyers and Paytm staff even after the listing. Everyone continued posing for pictures.

Paytm's $2.5-billion IPO, India's largest, is a big moment. Although in what way, the coming days will tell. The morning of November 18 itself made the message from stock market investors clear—that the hype and excitement belied a business that is very much a work-in-progress.

However, venture capitalists and even people who doubt Paytm's business in private discussions were gung-ho about the IPO, the valuation be damned. On Twitter and elsewhere, these investors contend that no matter the valuation, such a big internet startup going public from India itself is a moment of celebration.

But the stock price does tell a story. Zomato, the first Indian internet company to list this year, had a pre-IPO valuation of $5.7 billion. It listed to much fanfare and is currently trading at a valuation of over $16 billion. Paytm is trading at similar, if slightly lower levels.

That’s telling because when Paytm was worth $10 billion in early 2018, Zomato was valued at just over $1 billion. How times change.