RailTel Corporation of India IPO: 10 things to know before subscribing to the issue

The public issue, which opened for anchor investors on February 15, will be available for subscription from February 16 to February 18.

RailTel Corporation of India's initial public offering is be the second public issue from the government and the seventh IPO of the year 2021.

Here are 10 things to know before subscribing to RailTel Corporation of India IPO:

The public issue comprises up to 8,71,53,369 equity shares of the face value of Rs 10 each and is a complete offer for sale by the Government of India.

Investors can bid for a minimum of 155 equity shares and in multiples of 155 thereafter.

The share allocation will take place around February 23 followed by unblocking of funds from ASBA account on February 24. Eligible investors will get shares on February 24 or 25 and the stock will get listed on February 26.

The company and the government, in consultation with merchant bankers, have fixed the price band at Rs 93-94 a share. In the higher price band, the minimum application size for retail investors comes to Rs 14,570.

The government is going to raise Rs 819.24 crore by selling a stake in RailTel.

The company will not receive any proceeds from the offer and the funds would be received by the selling shareholder, which is the government.

The main object of the offer is to carry out the disinvestment of 8,71,53,369 equity shares held by the Government of India.

Nureca IPO: Top 10 things to know before subscribing the issue

RailTel Corporation is an information and communications technology (ICT) infrastructure provider and one of the largest neutral telecom infrastructure providers in the country, owning a pan-India optic fibre network on exclusive right of way (ROW) along railway tracks. It is a Mini Ratna (Category-I) Central Public Sector Enterprise, wholly-owned (100 percent) by the Government of India and under the administrative control of the Ministry of Railways.

The company was incorporated in September 2000 to modernise the telecom system for train control, operation and safety and to generate additional revenues by creating nationwide broadband and multimedia network by using the right of way along railway tracks.

As of January 2021, its optical fibre network covered 59,098 route kilometers and 5,929 railway stations. It operates data centres in Gurugram, Haryana and Secunderabad, Telangana to host and collocate critical applications for customers including the Indian Railways.

The company offers a diverse range of services across industries and its portfolio can be broadly classified as telecom network services, telecom infrastructure services, managed data center and hosting services and projects (system integration services).

The company is working on a number of projects. These include the Kerala Fibre Optic Network project where the company is a part of the consortium that involves provisions of scalable and resilient optic fibre across Kerala.

RailTel believes that the company has the following competitive strengths:

a) It is among the largest neutral telecom infrastructure providers in India with pan-India optic fiber network.

c) It is a key partner to the Indian Railways in digital transformation.

d) It has experience in executing projects of national importance, with a robust pipeline of projects.

e) The company has a consistent record of financial performance and growth.

a) The company intends to continue to expand telecom services and deploy latest technologies.

b) It intends to further diversify services and solutions with a focus on Indian Railways.

c) It intends to expand services outside India.

It ranked first in terms of operating profit margin among the key IT/ICT Companies in India in FY20. 10) How does it stack up against peers 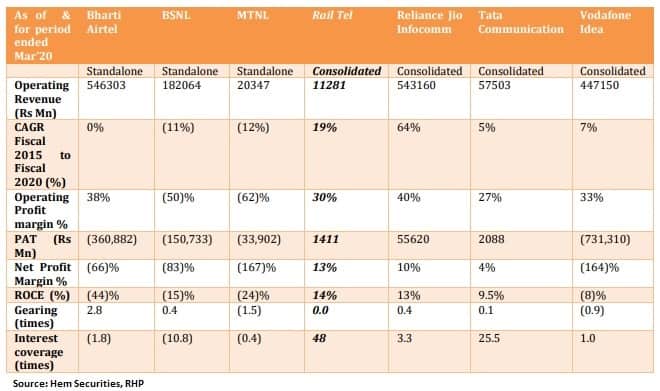 An assessment of the key IT and ICT companies in India, which include HCL Infosystems, RailTel, Sify Technologies, Tata Communications and Telecommunications Consultants India (TCIL) follows;

Puneet Chawla is the Chairman and Managing Director of the company since December 2018. He is an IRSSE officer (batch of 1985). Prior to joining RailTel, he held positions such as Executive Director (Safety) in the Railway Board of Ministry of Railways, Government of India, Divisional Railway Manager, Ajmer, Chief Project Manager, Indian Railway Project Management Unit, General Manager, Rail Vikas Nigam Limited.

Sanjai Kumar is the Director (Network, Planning and Marketing) and whole-time director. Anand Kumar Singh is the Director (Finance) as well as a whole-time director and Chief Financial Officer. He has over 33 years of experience in finance and accountancy. Prior to joining the company, he was the executive director (finance) at IRCON International and also worked in Bokaro Power Supply Company and Damodar Valley Corporation.