The report, based on the analysis by immigration policy think tank National Foundation for American Policy of top 25 employers, is based on USCIS data for first two quarters of FY20 between October and March.

India’s second-largest IT major Infosys saw 59 percent of its H-1B petitions for new employees denied between October and March 2020 quarter compared to the same period five years ago, according to a report.

Infosys’ denial rate was only 2 percent in FY2015. Only TCS’ denial rate remained at 15 percent, lowest among the Indian IT services companies, the report added.

The report, based on the analysis by immigration policy think tank National Foundation for American Policy (NFAP) of top 25 employers for the first two quarters of FY20, states that the denial rates of H-1B visas continue to remain high under the Trump administration, making it difficult for companies to hire foreigners.

Infosys was followed by Cognizant, whose denial rate increased from 8 percent in FY15 to 52 percent in FY20. Other IT companies that had a significant number of their petitions denied include Wipro at 39 percent, Capgemini at 33 percent and Tech Mahindra at 32 percent. In FY2015, their visa denial rate was between 1 percent and 7 percent five years ago. HCL Tech's share increased to 37 percent from 2 percent. 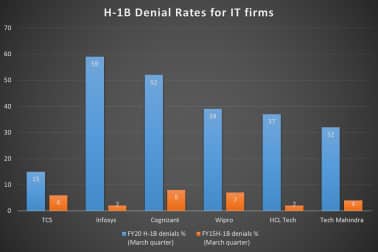 IT firms are the largest beneficiaries of H-1B visa. Of the 85,000 H-1B quota every year, top IT firms account for a significant share. Since the Trump administration took over since 2017, the denial rates spiked for the outsourcing firms compared to their American technology peers.

For instance for Amazon and Google, one of the largest employers of H-1B, visa denial is 15 percent. It was 1 percent in FY15. Denial rates of Microsoft, Facebook and Apple stood at 12 percent, 7 percent and 9 percent respectively compared to 0-2 percent denial rate five years back.

As a result, Indian IT services firms stepped up their localisation efforts. Currently, close to 60 percent of their workforce in the US are locals.
Moneycontrol News
first published: Aug 31, 2020 05:13 pm