The scooters have been designed with quick acceleration, high storage space and new features like park assist, remote diagnostics, and on-board navigation.

"While building our flagship variant, we realised we have enough resources to make an upgraded version with higher range, better acceleration, and more efficiency," said Tarun Mehta, CEO and co-founder of Ather Energy.

The price of the scooters also includes a monthly subscription, which will take care of most operational expenses pertaining to the scooter. This includes periodic maintenance inclusive of consumables, breakdown assistance and unlimited data services for the dashboard. The Ather One plan entitles customers to free public and home charging.

Most electric scooters available in India right now, made by Hero, Indus, and Avon, have top speeds of between 25 km/hour and 60 km/hour, with a maximum engine power of 800 watts. 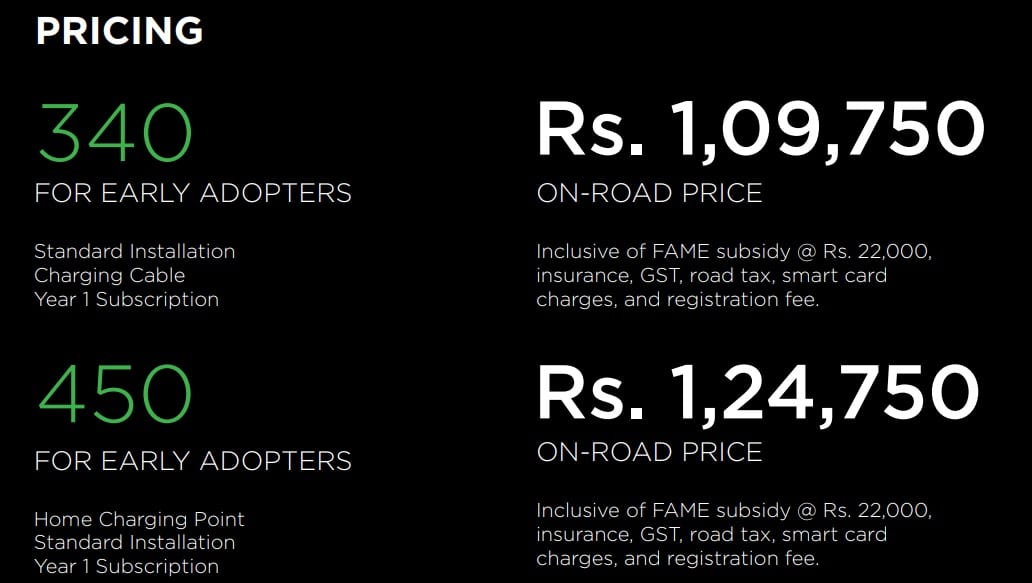 In the last two years, electric vehicle sales in India have jumped to 25,000 units in FY17 from 16,000 units in FY15, thanks to the government's focus on clean mobility. The Indian government has set an ambitious goal to go all electric, and has asked companies to start selling only electric cars by 2030.

Although there are various electric vehicle models available in the market right now, a majority of them are hybrid variants and adoption has been a challenge due to lack of proper charging infrastructure.

Ather Energy is building its own charging infrastructure under the AtherGrid brand, which it recently launched.

"Between the Ather 450 and Ather 340 launching and AtherGrid being up and running in Bengaluru, we are really looking forward to expanding into Chennai and Pune in the coming months. These are exciting times to be a part of the industry," Mehta said.

The Bangalore-based company has installed 17 charging points in the city and is planning to scale it up to 60 charging points by the end of the year. In the long-term, it plans to build charging infrastructure in 12 major cities by 2020 and 30 cities by 2022, with a total of 6,500 charging points. Ather recently committed an investment of Rs 130 crore towards that end.

The company, backed by the likes of Hero MotoCorp, Tier Global, as well as Flipkart founders Sachin Bansal and Binny Bansal, simultaneously launched its scooters in Mumbai, New Delhi, and Chennai.

Mehta indicated that the company will look for more funding as it is looking to expand itself, even though it is "sufficiently capitalised for Bangalore". In October 2016, Hero MotoCorp invested Rs 205 crore in the Indian startup by picking up 26-30 percent stake.
Durba Ghosh
Tags: #Ather Energy #charging infrastrcture #e-vehicles #Electric Vehicle #Flipkart #Hero Motocorp #Mission Electric #Tiger Global
first published: Jun 5, 2018 04:12 pm