"It would be advisable to diversify your portfolio and follow an asset allocation approach to investing for your goal, and thereby optimize your risk and returns," says Sampath Reddy, Chief Investment Officer, Bajaj Allianz Life Insurance.

“The only investor who shouldn’t diversify are those who are right 100% of the time.” - Sir John Templeton

Investor A and B decide to invest Rs 5 lakhs each to meet the goal of funding their children’s post-graduation expense after 15 years. Investor A is risk-averse and decides to invest in a debt fund, which delivers him a compounded annual growth rate (CAGR) of 8 percent per annum.

Meanwhile, Investor B is a high-risk investor and wants to maximize his returns. He chooses to invest in a largecap equity fund, which delivers him a compounded annual growth rate (CAGR) of 15 percent per annum. 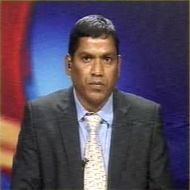 Now let’s assume that in the 15th year, an event like the global financial crisis of 2008 happens, and markets crash. Let’s assume Investor B’s large cap equity fund falls by around 55 percent during the year (which is what a typical large-cap equity fund fell by during the market downturn in 2008).

As a result, his investment portfolio has now fallen to Rs 15.9 lakhs, compared to Rs 35.4 lakhs a year ago. Investor A’s portfolio value also stands ironically at Rs. 15.9 lakhs, as his debt fund managed to deliver 8 percent during the year.

Both Investor A & B are disappointed that they have not been able to meet their children’s education goal at the end of 15 years.

Which was the better choice?

So was Investor A or Investor B’s investment choice the better one? The frank answer is that neither of them was the ideal one – because both of them ignored the importance of asset allocation while investing for their goal.

Investor B, chose equities as an asset class, which was right, considering his higher risk profile and long-term horizon. But after benefiting from a higher rate of return of equities and the power of compounding, he did not choose to move into a safer asset class (like debt or cash) to protect his downside, as he approached the maturity term of his goal.

Although Investor A, was a more risk-averse investor, he could have considered some allocation to equities, as his investment horizon was quite long. Past data has shown, that longer the holding period, lower the chances of negative returns from equities. The relatively lower returns from debt were insufficient to meet his investment goal.

Asset allocation, therefore, becomes an important consideration in goal-based investing. It is important to diversify between different asset classes. Some of the key reasons to follow asset allocation are as follows:

Debt outperformed in 2015 and 2016, but was an underperformer in 2017, as bond yields hardened during the year. Therefore, it would be wise to have a mix of different asset classes in your portfolio and review your asset allocation from time to time (say every 2-3 years for a long-term goal), whether it is in line--to meet your investment goal.

b) Equities has generally been the top performing asset class over the long term, but it also comes with large downside risk 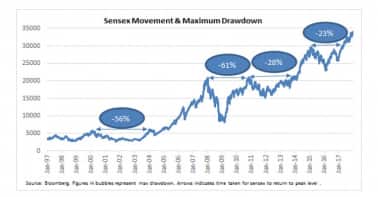 As can be seen in the above chart equities (represented by the benchmark Sensex index) has performed well over the long term, but this up-move also comes with regular market downturns, which last for some time.

To measure the fund performance during the market downturn we have a metric called Maximum Drawdown, which is the maximum fall in the fund’s NAV during any market downturn from the market peak to the valley date (that is when the market starts to turnaround).

As can be seen from the chart, the Sensex has seen a maximum drawdown of 56 percent during the dot-com bubble crash of 2000, a max drawdown of 61% during the global financial crisis of 2008-09, and reasonably large drawdowns in 2013 and 2015 as well.

Also, in each of these market downturns, it has typically taken the Sensex around 2-4 years to reach back to its previous peak level, as indicated by the arrows in the graph.

c) Follow a glide path approach to asset allocation in meeting your goal, to ensure a smooth landing

From the above illustrations, we have seen that equities provide superior returns over the long term, but they also come with downside risk and volatility. Therefore, an investor should use an asset allocation approach in meeting the goal.

This is to protect your downside and higher returns from equities generated in the earlier years and help you to meet your goal –especially if a big market downturn happens (as it happened in the case of Investor B). This change in asset allocation mix, based on the term to maturity of your goal, is known as a ‘glide path’. 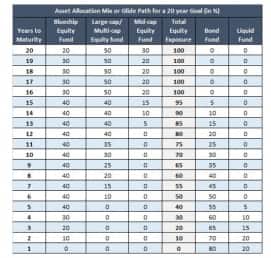 Given above is the glide path or asset allocation mix for a 20-year goal. This is the “Wheel of Life” portfolio strategy provided in our ULIP (Unit Linked Insurance Plan) products.

Investors can use this strategy if they find it difficult to decide their asset allocation mix. As can be seen in the table, the total exposure to equity is higher in the beginning of the goal at 100%. Within that, 30% exposure is to the mid-cap equity fund.

Therefore, equity exposure is gradually brought down to 0 percent before the maturity of the goal. On the flip side, exposure to bond fund is increased as the goal progresses (to provide downside protection), and some liquid fund exposure is also provided. In a ULIP product, fund switches are also exempt from any capital gains tax incidence, thereby making it attractive from a taxation point of view as well.

From another perspective, at a younger age, human capital is higher and investment horizon is longer. Also, financial capital is lower at the initial stage due to lower earnings and savings.

These attributes allow higher risk-taking the ability for the investor, as he/she is not dependent on their investment for livelihood. At a later stage in life (near retirement), financial capital would have grown substantially, while human capital would have diminished accordingly.

To conclude, I would like to re-iterate the quote at the beginning of the article from Sir John Templeton, which says that – “The only investors who shouldn’t diversify are those who are right 100% of the time.”

We all know that in the market no one is right, 100 percent of the time—not even expert fund managers. Also, in a landmark study published in 1986 by Brinson, Hood, and Beebower (popularly known as the BHB study), it said that ~94 percent of a portfolio’s variation in returns is explained by asset allocation.

Therefore, it would be advisable to diversify your portfolio and follow an asset allocation approach to investing for your goal, and thereby optimize your risk and returns.

Disclaimer: The author is Chief Investment Officer, Bajaj Allianz Life Insurance. The views and investment tips expressed by investment expert on Moneycontrol are his own and not that of the website or its management. Moneycontrol advises users to check with certified experts before taking any investment decisions.
TAGS: #Expert Columns #MARKET OUTLOOK #Nifty #Sensex
first published: Feb 17, 2018 11:17 am