The project holds strategic significance as Zojila Pass is situated at an altitude of 11,578 feet on the Srinagar-Kargil-Leh National Highway and remains closed during winters due to heavy snowfall.

The project holds strategic significance as Zojila Pass is situated at an altitude of 11,578 feet on the Srinagar-Kargil-Leh National Highway and remains closed during winters due to heavy snowfall.

At present it is one of the most dangerous stretches in the world to drive a vehicle and this project is also geo-strategically sensitive. 1. The 6.5-km Z-Morh tunnel is being constructed on the National Highway-1 between Srinagar and Leh and will provide all-weather connectivity between Gagangir and Sonmarg on the Srinagar-Leh section.

The tunnel will reduce the distance between Gagangiri and Sonawal from 11 km to 6.5 km.

2. Historically, the roads between Srinagar and Sonamarg get covered in snow from November to March and are also prone to avalanches, restricting the movement between the two places.

The Z-Morh tunnel will help the locals of Sonamarg get supplies during the winter and sustain through the winter in Sonamarg, instead of historically migrating to Srinagar before the winter hits. 3. The Z-Morh tunnel is being developed by Apco Infratech Pvt Ltd at an estimated cost of Rs 2,300 crore.

Earlier, the project was allotted to Infrastructure Leasing & Financial Services (IL&FS), but the contractor abandoned it after IL&FS Group faced a financial crisis.

4. The Z-Morh tunnel located at 8,960 feet will measure 6.5km in length upon completion, and will also have a 5km approach road.

While the escape tube of the Z-Morh tunnel has been opened for public use from September 28, the tunnel will be fully completed by June next year, instead of the earlier deadline of December 2023. 5. The tunnel is designed for the flow of 1,000 vehicles an hour at an approved maximum speed of 80 km per hour. 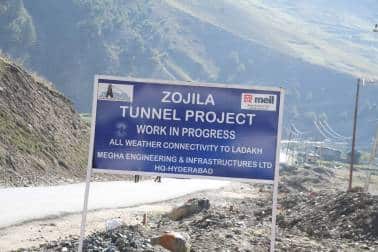 1. The 14.2-km Zojila tunnel is being constructed on the National Highway-1 between Srinagar and Leh and will provide all-weather connectivity between Baltal and Minamarg on the Srinagar-Leh section.

The tunnel will help improve connectivity between Srinagar and Ladakh, making for a strategic asset for the Indian Army. 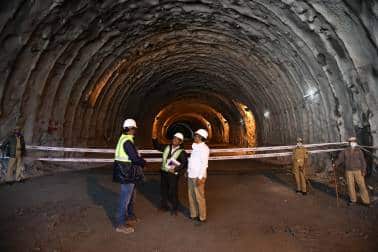 2. The Zojila Pass is a strategic link connecting the Leh-Ladakh region to Srinagar and the rest of India. The region, however, does not have all-weather connectivity, especially to Leh, the capital of the Union Territory of Ladakh.

The Zojila tunnel will reduce the distance (from Baltal to Minamarg) from 40 km to 13 km and travel time between the two Union Territories too will be reduced by 1.5 hours. 3. The tunnel located at an altitude of 11,578 feet will once completed will be Asia's longest bi-directional tunnel.

The Zojila tunnel is being developed by Megha Engineering and Infrastructures (MEIL) at an estimated cost of Rs 4,600 crores.

Union Minister for Road Transport and Highways Nitin Gadkari on September 28 said that the strategic Zojila Tunnel Project will be completed by December 2023, much before its earlier deadline of 2026. 4. The entire work of the tunnel is divided into two divisions in the 33 km span. The first part involves the development and expansion of the 18.475 km highway between Z-Morh to Zojila.

The remaining portion of the highway (13.842 km) will be freshly developed. This highway consists of two twin-tube tunnels. Two snow galleries will also be built. The tunnel will also have three vertical shafts to provide ventilation.