The Trump administration's move to ban the skilled worker programme will increase employment in countries such as India rather than the US, especially in the technology space, according to a research paper released by the National Bureau of Economic Research.

This is exactly what the Indian IT firms and tech giants such as Microsoft’s Satya Nadella and Google’s Sundar Pichai have been pointing out since the proclamation was signed on June 22.

Only now that has been proven with empirical data in the report.

Close
Why are we talking about this now?
On June 22, US President Donald Trump signed a proclamation that banned temporary worker visa such as H-1B, L-1, H-2 and J-1 till the end of December.

“These results suggest that the firms most impacted by constraints on H-1B visas would be firms dependent on computer-related workers,” the research report said. This translates to impact on Indian techies and also tech firms.

Of the 85,000 H-1B visas issued every year, Indians account for more than 60 percent, followed by China. The last three years have seen over 40 percent increase in the US tech giants filing for H-1B visas, with Amazon, Google and Microsoft accounting for around 4,000 visas. 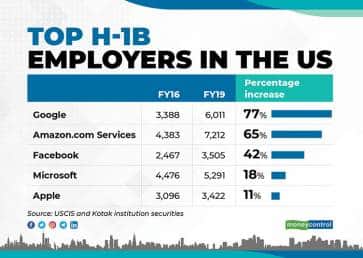 What does the research paper say?
As restrictions continue, the report said, there is a clear narrative of multinationals choosing countries like India, China and Canada over the US over decades.

In addition, these multinationals were more likely to open more centres in newer countries in response to such restrictions, and employment increased at existing centres overseas, the report added.

The largest impact would be on R&D-focused companies in the country since they are the ones most likely to offshore the work. This will be a significant blow to the US, since these firms are responsible for 80 percent of US R&D and employ about 25 percent of US private employees.

Good news and bad news?
This is good for India as more multinationals are likely to set up captive centres here.

In addition, outsourcing and offshoring of more work to IT service providers could increase.

Prateek Agarwal, CFO, HCL Technologies, said the company started offshoring project work from January. “When we started very large deals, we re-batched people and over a period of time (we will) start right-shoring,” he added. Right-shoring or offshoring refers to locating business manufacturing operations to countries that are cost efficient.

This could increase at the back of COVID-19 and in the face of visa restrictions. In addition, like experts pointed out, US companies are likely to set up more centres in India. Recently, Microsoft opened a 4,000 seater campus in Uttar Pradesh to develop an electronics manufacturing park.

Captive centres are one of the largest employment generators in the country. According to reports, they employ close to 8 lakh people.

And the bad news...The move will have a negative impact rather than address the unemployment issue in the US. If the job that were expected to be created goes to other countries, it will impact innovation in the US and also its economy.

This is also largely in line with the commentary by the tech leaders. V Ramkrishnan, CFO, Tata Consultancy Services (TCS), explained during a recent interaction that the US is the most innovative country in the world right now and the largest innovation still comes out of there. “That is primarily because they have invested in meritocracy and due to opportunities that have been made available for entrepreneurs,” he added.

“If we have constraints on that, it is going to affect its technological leadership, our customers and it will also affect people like us,” Ramakrishnan added.