GST impact: Full list of cars, bikes that will become cheaper from July 1

Buying cars and two-wheelers will be a much cheaper affair from tomorrow as Goods and Services Tax (GST) will ring in a lower tax than all the taxes applied before.

Buying cars and two-wheelers will be a much cheaper affair from tomorrow as Goods and Services Tax (GST) will ring in a lower tax than all the taxes applied before.

Also Read: Quick look at what gets costlier, or cheaper?

Mid-size cars will be even cheaper as their rates from tomorrow will be down by 3.6 percent. Sedans like Honda City, Hyundai Verna, Maruti Ciaz and Volkswagen Vento will see a minimum price cut of Rs 30,000. The biggest beneficiary of the GST roll-out will be luxury cars. Mercedes-Benz, BMW, Audi and Jaguar Land Rover have announced price cuts in the Rs 1.25 lakh going up to Rs 7 lakh as the rate reduction on them is a whopping 8.8 percent.

Sports utility vehicles, the most sought-after personal vehicles, will see the biggest drop in prices. Under GST, SUVs are charged at 43 percent, a reduction of 12.3 percent compared to 55.3 percent charged presently.

GST is subsuming a total of five taxes and levies -- excise, NCCD, infra cess, CST and VAT -- which is bringing down the final effective tax rate in almost all the cases. These charges make up the ex-showroom price of a vehicle.

Value added tax (VAT) differs from state to state and, therefore, the price of the vehicle will not remain uniform across the country.

Another Tryst With Destiny! How GST Will Change Your Life After July 1

Other charges like road tax, registration cost, insurance and perhaps logistics charges are not subsumed in GST and will not be affected. These charges make up the final on-road price the buyer has to pay to the dealer.

As far as prices of bikes and scooters are concerned they will witness a minimum fall of Rs 1,000 going up to Rs 5,000. All two-wheelers with engines of less than 350cc will see the reduction of 2.2 percent. However, those with engines bigger than that will see a price rise of 0.8 percent or a minimum of Rs 1,000. 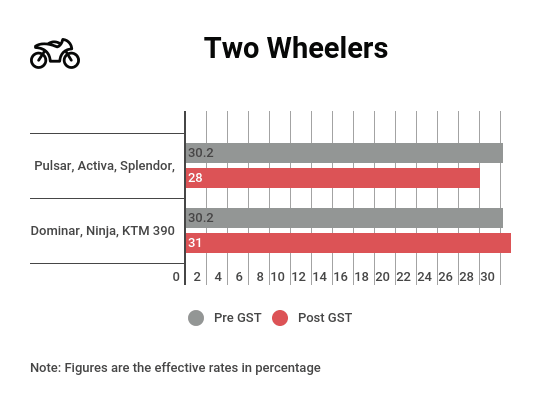 Though hybrids are not so popular in India primarily because of their high price tags they will become even more expensive under GST. At 43 percent the price jump on hybrids will be the maximum compared to around 30.3 percent at present.

Buses with passenger capacity of 10-13 will also see their price going up by almost 13 percent. However, commercial vehicles will see a price reduction of nearly 2 percent and that of three-wheelers by 1 percent.