PNB Housing is looking to raise as much as Rs 2,000 crore through the “limited preference" route, under which a maximum of five investors can participate, the people said on condition of anonymity.

PNB Housing is looking to raise as much as Rs 2,000 crore through the “limited preference" route, under which a maximum of five investors can participate, the people said on condition of anonymity.

Two of its existing shareholders, private equity firms General Atlantic and Carlyle, will also infuse funds into the mortgage lender, the people said, adding that the company will use the funds to bolster its balance sheet and enhance lending to homebuyers and property developers.

“The transaction is expected to be completed by October and there is a possibility that its parent, Punjab National Bank, may also participate in the funding round, though the potential investment is still under contemplation," said one of the two people cited earlier.

The equity infusion into PNB Housing Finance, approved by its board in July, comes at a time when the real estate sector is grappling with sluggish sales and unfinished projects due to a liquidity squeeze that has forced many developers to bring in a partner to complete projects, or sometimes even abandon them. For real estate-focused financiers, the situation has led to asset-liability mismatches that threaten their survival. 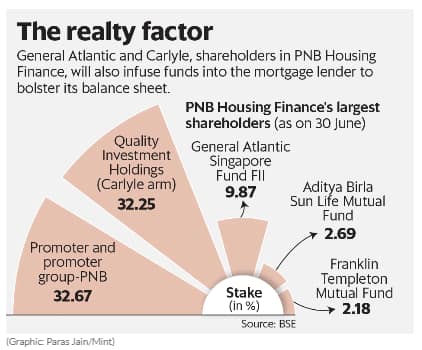 On Thursday, Altico Capital, a financier to real estate companies, defaulted on an interest payment of Rs 19.9 crore. Earlier, Dewan Housing Finance Ltd defaulted on interest or principal payments on a series of term loans and market-linked instruments.

PNB Housing Finance was set up in 1988 as a deposit-taking housing finance company by state-run Punjab National Bank.

In December 2009, PNB sold 49 percent in the company to an entity owned by private equity fund NSR Partners, which during fiscal 2017 sold the stake to Quality Investment Holdings, part of the Carlyle Group.

Assets under management (AUM) of PNB Housing Finance have grown at an annual average pace of around 45 percent from fiscal 2016 to fiscal 2019, reaching Rs 84,722 crore as on 31 March, according to its corporate filings. This has been driven by growth across its retail and wholesale portfolio, although the pace of growth in the latter segment has been faster on account of the low base.

“Consequently, the share of individual housing loans to the AUM has dropped to 58 percent as on March 31, 2019 compared to 64 percent as on March 31, 2014, while the share of the wholesale portfolio increased to 21 percent from 11 percent during the same period," credit rating agency Crisil said in July.
Mint
TAGS: #Business #Companies #PNB Housing Finance #stocks
first published: Sep 16, 2019 10:40 am