Four years of N Chandrasekaran: The marathoner builds his legacy at Tata Sons, one step at a time

Even as the Chairman of Tata Sons bets on new areas such as electric vehicles, digital and healthcare, legacy challenges continue to shadow the $106 billion conglomerate.

It is not known if Tata Sons Chairman N Chandrasekaran is one to celebrate work anniversaries. But the news around various Tata companies as it nears February 21, which marks the four years since he took over the all-important corner office of India’s biggest conglomerate, would please the 57-year-old.

Sample a few. On February 15, Jaguar Land Rover (JLR), a unit of Tata Motors, announced that Jaguar will be an all-electric car brand by 2025. The company will possibly also set up a plant to produce batteries.

The following day came the buzz that the Tata Group will buy a 68 percent stake in online grocery startup BigBasket for Rs 9,100-Rs 9,200 crore.

A formal announcement may happen soon, with just an approval from the Competition Commission of India awaited. The investment is a crucial part of the group’s larger play in consumer business and in building the 'Super App'.

On February 17, Tata Electronics said it will invest Rs 4,700 crore to set up a mobile component manufacturing unit in Tamil Nadu. Apple is said to be one of the many possible clients of the company.

These are three of the six areas identified by Chandrasekaran, in which the Tata Group will place its bets on. The other three are healthcare, renewable energy and battery storage. These have also made headlines.

In September 2020, the newly set-up Tata Medical and Diagnostics launched the Tata CRISPR test for COVID-19. In the renewable space, the action has been thick with Tata Power Solar, the largest integrated solar power generator in India, bagging an order worth Rs 1,200 crore from NTPC in January. The battery storage part is, perhaps, the only one that has remained relatively quiet.

Taken together, these announcements and steps are the clearest signal, in four years, of the direction Chandrasekaran wants to take the Group, whose listed companies had net sales of $96.8 billion as on March 2020.

“When Chandra took over in 2017, there was a cloud of uncertainty over the Group. While the case (Tata Sons is in the middle of a legal tussle with former Chairman Cyrus Mistry) continues, the Group has come out of that uncertainty. Chandra has handled the situation admirably,” says Zulfiquar Memon, founder and Managing Director of MZM Legal, which is one of the law firms representing the Tatas against Mistry.

Memon, who has interacted with Chandrasekaran many times on the case, talks about the Tata Sons Chairman being “extremely calm under pressure, not showing any stress”.  And these four years, adds Memon, “were among the toughest for any Tata Sons Chairman”. 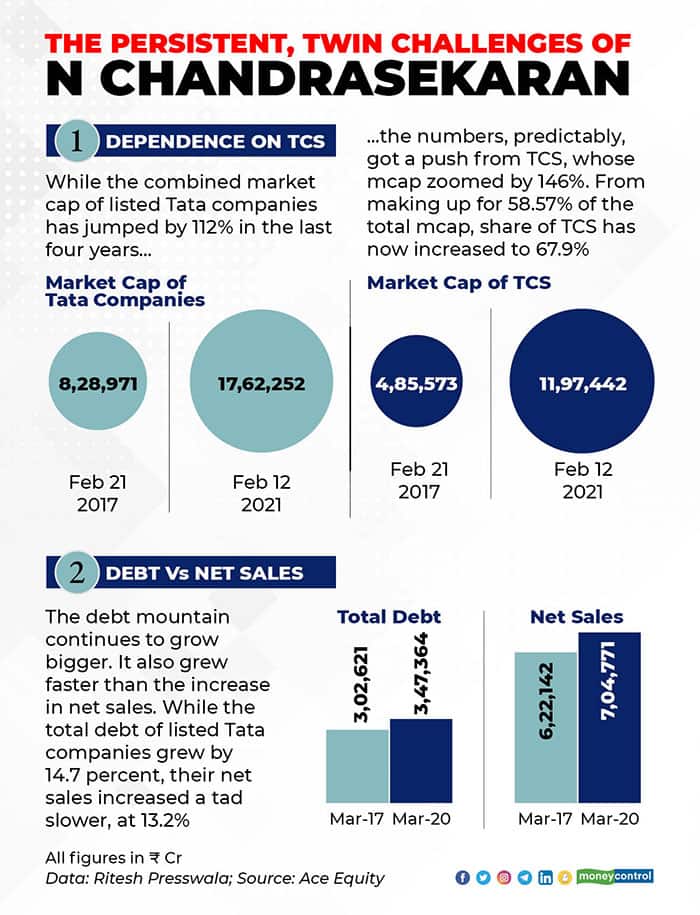 It has been a tough assignment. Says a former director of a major Tata company: “While it was Cyrus who inherited a rocky boat, given that many of the global acquisitions and some of the businesses, like telecom, weren't doing well, Chandra, too, had his task cut out.”

The 3S and the GE parallel

Like this Moneycontrol report had detailed, in his first year, Chandrasekaran did well to steer the Group away from the controversies that raged after his predecessor Cyrus Mistry was ousted from Bombay House, the headquarters. He sold off the loss-making consumer mobile business to Bharti Airtel, carried on the restructuring of Tata Steel Europe, which took off under Mistry, and made critical human resource tweaks. He brought in talent from outside and rejigged leadership at important Group companies.

These steps were seen to be critical to deliver the ‘3S’ that Chandrasekaran had listed in his 2017 year-end message to employees, something that has become an annual ritual now. What 3S means is simplification, synergy and scale.

Group executives point out initiatives taken under the theme. One is the ‘synchronised manner’ in which eight group companies came together to launch an ecosystem to develop electric vehicles.  Another is the 'masterstroke' of combining Tata Chemicals' consumer products business with Tata Global Beverages, which was renamed Tata Consumer Products.

The company has been the outperformer in the group, with its stock rising by 329 percent in four years. Much of the gain has come in the last two years.

Group observers welcome these steps, but ask for more. “There is little information available on what has happened to the larger exercise to simplify the organisational structure, and to improve synergy between Group companies. The Group continues to have a large number of companies and their subsidiaries,” says Nirmalya Kumar, former Tata Sons director, and now Lee Kong Chian, Professor of Marketing at Singapore Management University and distinguished fellow at INSEAD.

A former Tata senior executive drew parallels to Chandrasekaran's job to that of Jeff Immelt, the former CEO of American conglomerate GE. Immelt took over as CEO after the iconic Jack Welch. But he spent much of his 16 years at GE trying to simplify the behemoth of a group left behind by Welch.

Interestingly, Chandrasekaran had roped in a GE veteran to drive synergy between Tata companies - Shane Fitzsimons. In the last four of his 17 years at the American conglomerate, Fitzsimons was Vice President, Global Operations.

“Global Operations made great progress on simplification, focussing on standardising and fixing processes, leaning operations, and maximising the synergies of the multi-functional capabilities + scale. Since 2014, the team has delivered $350MM in productivity, whilst investing in common infrastructure, process, digital and data-driven solutions,” Fitzsimons says about the GE stint in his LinkedIn profile.

His tenure —  one year and three months —  as the Tata Group Synergy Officer was short. Little is known about his exit. Fitzsimons declined to comment.

Tata Sons declined to participate in the story.

Chandrasekaran, who created the new position to bring in the GE veteran, hasn't got anyone to replace Fitzsimons. Does it mean that the work is not done? Or is it not important anymore?

Not really. One of the initiatives of Fitzsimons was to set up One Tata Operating Network (OTON), whose “core objective would be to deliver outcomes through a culture of working together and leveraging connections”, he had explained in a webinar in February 2019, two months before his exit.

OTON, he said, will play an important role in the intersection of the 10 listed Tata companies and 16 unlisted ones. The Network, Fitzsimons added, will focus on five clusters that include shared services, talent management and tax and treasury.

While it was Cyrus who inherited a rocky boat, given that many of the global acquisitions and some of the businesses, like telecom, weren't doing well, Chandra, too, had his task cut out

A month later, in March 2019, news came out that the Group has restructured into 10 business verticals, consisting 29 companies.  In April, Fitzsimons left and Jay Ghosh, a TCS old-timer, was appointed Global Head of OTON.

Would it help if Chandrasekaran too shared the financial benefits of the initiatives taken under OTON, just like Fitzsimons mentioned about GE? “That will be a great way to communicate the progress made, and will also take away the uncertainty,” says the former Tata executive quoted above.

Some of the challenges that Chandrasekaran inherited remain.

“Legacy problems continue. Tata Steel hasn’t got a solution to its European woes. While Tata Motors has recently started gaining share of the domestic passenger vehicle business, there is a long way to go for it, and for the JLR business to succeed,” says Shriram Subramanian of InGovern Research, a proxy advisory and corporate governance firm.

The dependence on TCS apart, the debt mountain is yet to be scaled (see the graphics). Here is a lowdown on some of the biggest businesses of the group.

Tata Consultancy Services: While its domination of the Indian IT landscape continues and it has recovered well from the pandemic, it has trailed Infosys in growth numbers in the last one year. Overall, the IT giant remains the cherry, and a lot underneath, of the Tata Group.

Tata Motors:  Like Subramanian pointed out the company has gained, both in market share and in the pecking order in the domestic car industry. Its market share has increased to 7.8 percent in the passenger vehicle segment, from 5.3 percent in 2017. Tata Motors is now the fourth-largest in the segment.

But its commercial vehicles segment has lost share —  from 43.9 percent to 38.9 percent in December 2020. And JLR has being seeing a continuous slide in sales since FY18. From 614,309 units in FY18, JLR closed FY20 with retail sales of 508,659. The consolidated revenue of Tata Motors has also fallen.

Tata Steel: The company has aggressively added capacity in the Indian market, ensuring that, versus JSW Steel, it remains in the game for the top slot. It’s the European operations that continue to be the headache. Two big attempts to sell some of its assets have gone awry.

Insurance: The two companies —  Tata AIG General Insurance and Tata AIA Life Insurance – don’t make a pretty picture despite recent gains. While the general insurance arm is now the sixth-largest —  one place down from 2017, despite an increase in market share, the life insurance business has done better by improving its ranking, but is still on the eighth spot. Bright side: Both companies have been among the fastest growing in the last one year.

AMC: After a turbulent past, Tata Mutual Fund is working its way up under Prathit D Bhobe. It is the 14th largest fund house in the country, but Bhode seems to be the right man to take the Fund up the ladder.

Aviation: There is not much to cheer, unless one wants to include the exit of Air Asia Group Berhard from the AirAsia India JV. This venture and Vistara, the JV with Singapore Airlines, continue to drain money and may continue to do so because of the COVID-19 impact. One is tempted to say Air India may bring some solace, but will be a difficult one to manage. By the way, Tata Group is yet to make its interest in Air India official.

Tata Realty and Infrastructure: Like in the AMC business, a new CEO  - Sanjay Dutt - is working well for the real estate and infrastructure business of the Group. While it is among the top five real-estate companies in the country, the question to ask is this: What happens to its many housing projects that were launched under former CEO Brotin Banerjee and are facing litigation now? Actually, there is one more question: Will it exit the residential segment altogether?

Overall, while Chandrasekaran will take heart from the progress some of the businesses have made, his cup, as of now, is half-full. Or, is it half-empty? One statistic is jarring. Despite the recent bull run, stocks of the 10 listed Tata companies are still in the red, from their levels four years ago.

It will be in the new businesses that Chandrasekaran will build his legacy, and, probably, move away from the shadow of Chairman Emeritus Ratan Tata. At the same time, it is difficult to ignore the possible influence of Tata.  As a senior industry-watcher pointed out, many of the six areas that Chandrasekaran highlighted are also of interest to the former Tata Sons Chairman. The startups that Tata has invested in include those in the EV, healthcare and digital spaces.

It's not going to be easy. In nearly all these sectors, the Group will be catching up with its peers, which have already taken a lead. But there are two things that will help Chandrasekaran. In the varied businesses of the $106 billion group, the Chairman has a treasure of data. Isn't that the new oil? And as a marathon runner, Chandrasekaran knows it's not about who takes the early lead, but who stays the course.