Exclusive: Swiggy drone trials for Instamart yet to kick off

Agnishwar Jayaprakash, CEO of Garuda Aerospace, one of the companies engaged in the drone trials, said that the government has asked for some clarifications and these are being provided

Three months after Swiggy announced that it would try drone deliveries for its Instamart platform, the pilot is yet to take off. Instamart, the company’s quick-commerce vertical, delivers groceries and other items to customers.

According to sources, red zones in urban areas, which are geographical areas demarcated as "no-drone zones", have proved to be a challenge. Non-compete clauses in contracts for companies engaged in these trials have also been a source of concern, the sources added.

Although only 10 percent of the country has red zones, a majority of these zones are in urban locations, where Swiggy’s drone pilots were to be taken up.

These zones were brought in last year to facilitate the drone industry as part of the Drone Rules–2021, and replaced the much more restrictive Unmanned Aircraft System Rules–2020.

Here’s a look at the red and yellow zones in Bengaluru and Delhi-NCR as on July 20; the other unmarked areas are green zones: “Understandably there is a concern around security. No one would want drones to fly over sensitive areas such as Parliament,” a source said.

However, Agnishwar Jayaprakash, founder and CEO of Garuda Aerospace, is optimistic. “Approvals in red zones are always challenging but that will not result in project delays,” he told Moneycontrol.

Chennai-based Garuda Aerospace and three other drone startups were selected in April to undertake the trials.

“The authorities have asked for clarifications and our team is in the process of providing all the necessary standard operating plans. This is a detailed approval process where minute nuances will have to be addressed & contingency plans needs to be accounted for,” said Jayaprakash.

“We are hopeful that the trials can begin as early as August and believe that the delay is a blessing in disguise as we have had time to deliberate and streamline our operational processes,” he added.

Moneycontrol has reached out to Swiggy with queries in this regard. However, we are yet to receive any response.

What does Swiggy’s pilot entail?

In April, Swiggy selected Chennai’s Garuda Aerospace to undertake the trials in Bengaluru and New Delhi-based Skyeair Mobility for the pilot in Delhi-NCR.

“The pilot is to evaluate the feasibility of drones for the middle-mile use case, particularly for… Instamart. Drones will be used to replenish stocks between seller-run dark stores and from a store to a common customer point. A delivery partner will then pick up orders from the common point and deliver them to the customer’s doorstep,” said Swiggy in a blog in April. We have also reached out to other companies involved in the trials in this regard, and we will update the post when we receive a response.

Although, according to sources the trials can be held in the green zones available in urban areas, a possible long-term solution could be the creation of drone corridors.

The Drone Rules–2021 have provisions to create drone corridors “for safe and seamless transfer of goods by unmanned aircraft systems within and across zones”.

Recently, according to a report, AIIMS Delhi could get a dedicated drone corridor with its extension campus at Haryana’s Jhajjar, located 50 km away, by the end of the year.

Attributed to unnamed officials in the government and AIIMS, the report said the Ministry of Civil Aviation and Airports Authority of India had approved the plan, but Delhi Police approval was awaited.

A look at what happened with Zomato

This is not the first time that an e-commerce delivery platform has flirted with the idea of drones for delivery.

In 2018, Zomato acquired Lucknow-based TechEagle Innovations to work on drone-based food delivery, with the help of hybrid multi-rotor drones.

This was at a time when the very restrictive Drone Policy – 2018 was in place. The rules then mandated that all kinds of permissions would have to be taken from the authorities before flying a drone.

It was only after permission was granted that the drones would be allowed to fly.

In 2019, Zomato carried out visual line of sight (VLOS) drone operations at designated zones with TechEagle and said the test was a success.

VLOS operations require drones to be in the line of sight of the operator at all times.

The food delivery platform had also applied for beyond visual line of sight (BVLOS) operations, which means that drones can be at distances outside the normal visible range of the pilot.

In June 2020, it received permission for the same but the platform soon announced that it had parted ways with TechEagle Innovations. This was when the first wave of COVID-19 was subsiding.

A Zomato spokesperson told Moneycontrol that drone delivery was no longer aligned with its future goals. Vikram Singh Meena, CEO and co-founder of TechEagle, said the company was looking towards working on the delivery of medicines and essentials through drones.

Apart from that, New Delhi-based Skye Air Mobility, also part of the Swiggy trials, has taken up trials for deliveries with Dunzo and Flipkart and claims to have completed 1,000 trips.

Worldwide, the use of drones in e-commerce deliveries has seen a major increase.

A report released by McKinsey in March said over the last three years, more than 666,000 commercial drone deliveries have been made to customers. This figure excludes test flights done to prove the technology.

“As of early 2022, we estimate that more than 2,000 drone deliveries are occurring each day worldwide,” the report said.

“The growth rate is accelerating every week, and we project that there will be close to 1.5 million deliveries in 2022 as a whole, up from just under half a million in 2021,” it added. 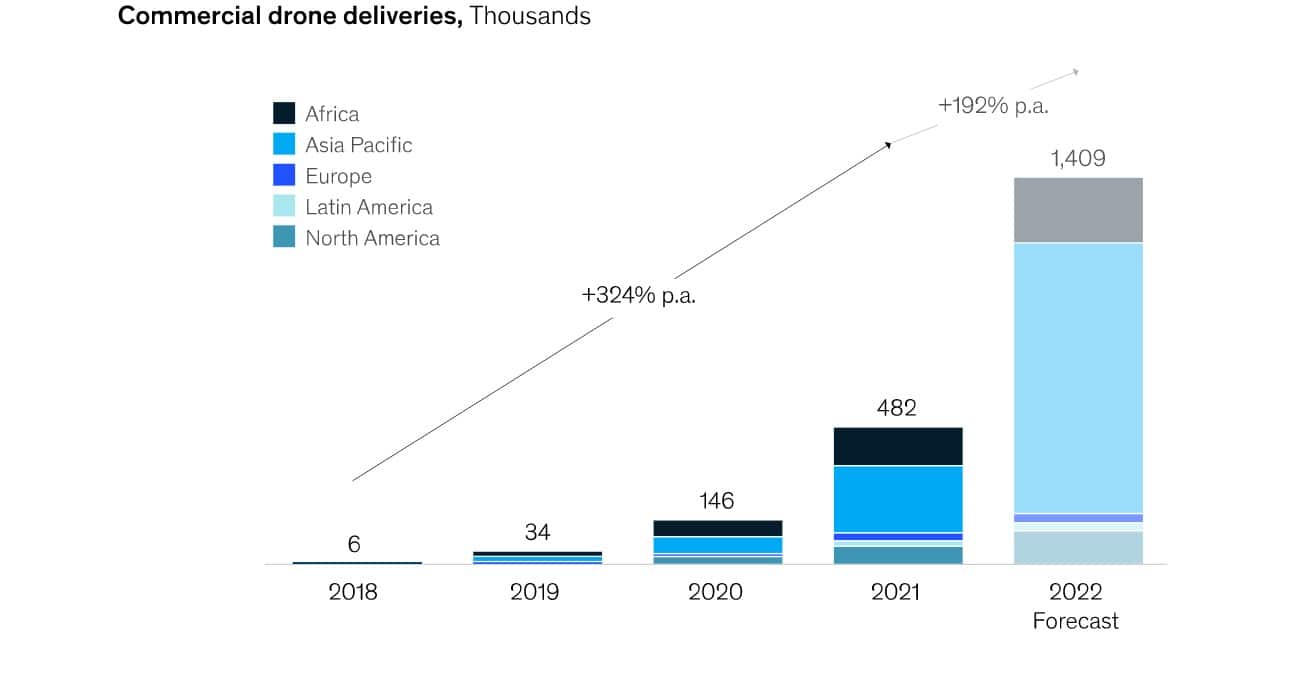 Here’s a look at some of the drone delivery projects that are underway:

Wing: Alphabet’s subsidiary Wing launched drone delivery services in Texas on April 7, according to a company blog. The company has been delivering groceries from Walgreens, ice-creams from Blue Bell Creameries, etc to thousands of homes in Frisco and Little Elm in Texas.

Walmart: After launching operations in November 2021, Walmart expanded its drone delivery network to 34 sites in May. In a release, the company said that through drones it would be reaching 4 million US households across the states of Arizona, Florida, Texas, Utah and Virginia.

“Between the hours of 8:00 a.m. and 8:00 p.m., customers will be able to order from tens of thousands of eligible items, such as Tylenol, diapers and hot dog buns, for delivery by air in as little as 30 minutes,” Walmart said.

Apart from this, there are multiple companies that have been testing or holding trials of drone deliveries.

Amazon: in June, Amazon announced that its customers in Lockeford, California, would be among the first to receive Prime Air drone deliveries in the US. Amazon said that it was working with the Federal Aviation Administration (FAA) and local officials in Lockeford to obtain permission to conduct these deliveries.