There is a loose correlation between sales growth and fresh hiring. Top line growth invariably translates into a corresponding expansion in the employee base

Economic growth has gone downhill since touching 8.2 percent in 2016, and correspondingly, the trend in employment growth has dovetailed market sentiment. The growth in the total employee base has dropped by over 1 percentage point to 6.6 percent in FY18, from 7.7 percent in the year-ago period. GDP growth has tapered off in the last couple of years, clocking 7.1 percent and 6.7 percent growth in FY17 and FY18 respectively.

The total number of permanent employees increased from 3.98 million in FY16 to 4.29 million in FY17, a rise of 7.7 percent. However, there has been a marginal dip in the employment growth rate in FY18, as only 0.28 million jobs were added, representing a year-on-year increase of 6.6 percent. 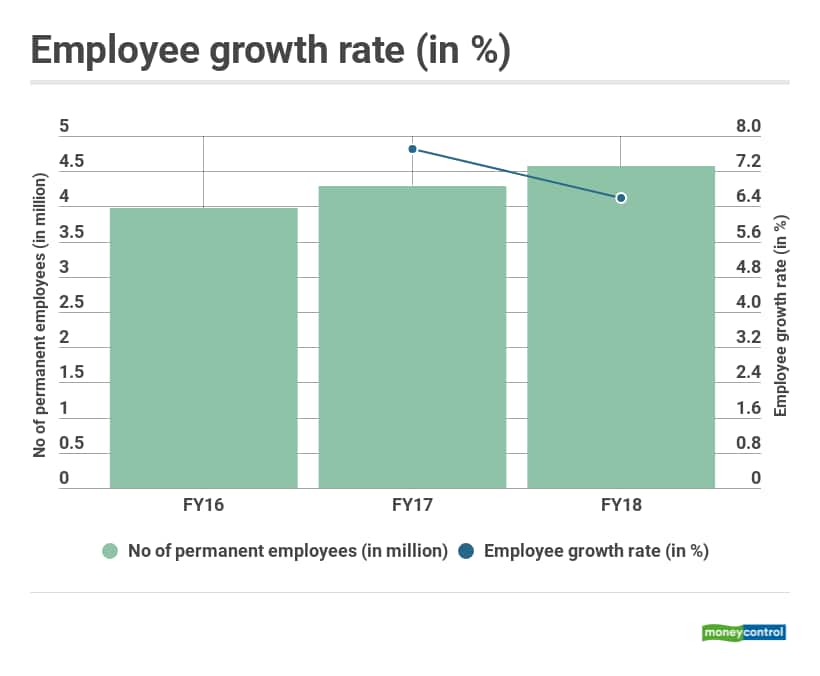 The data for the survey was collated by CARE Ratings, and encompasses 700 companies with net sales amounting to Rs 33.08 lakh crore. The decline in overall employee growth to 6.6 percent can be attributed to 65.4 percent of companies, an overwhelming majority, either recording negative employee growth rates or that below 5 percent. Moreover, 361 of the 700 companies polled said employee growth was lower in FY18 as compared to the previous year. 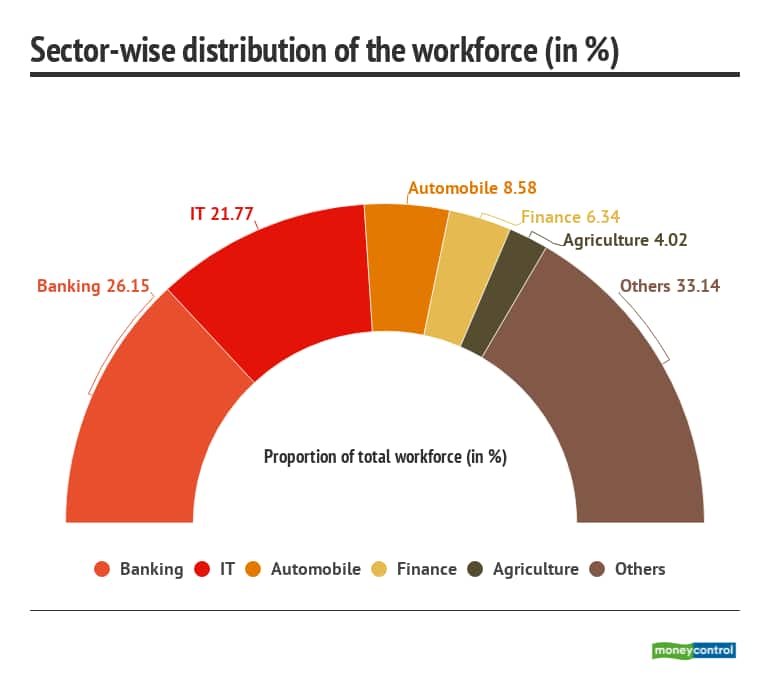 Salaried Indians are more likely to work in the banking sector or in information technology (IT). Agriculture, which is the biggest employer in the country, accounts for only 4.02 percent of all permanent jobs in the economy. The top five categories include 67 percent of the sample size, while the remaining 31 account for 33 percent of all jobs. 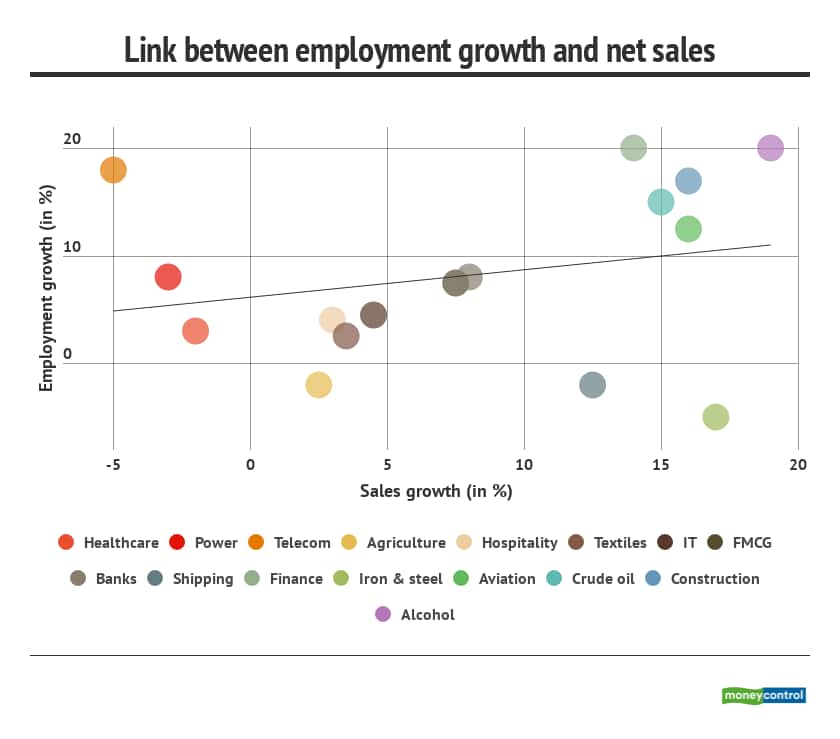 There is a loose correlation between sales growth and fresh hiring. Top line growth invariably translates into a corresponding expansion in the employee base. Sales growth of over 15 percent in alcohol, crude oil and construction have resulted in a corresponding rise in employee growth.

However, the same cannot be said about metals where high sales growth did not translate into greater hiring, possibly due to uncertainty over imports in the backdrop of the tariffs imposed by the United States. Low-margin sectors like telecom posted lukewarm growth numbers, but expanded their workforce by over 15 percent. The data also shows that it is the bigger companies that have augmented their workforce by hiring new employees in the previous fiscal. Companies with net sales of over Rs 10,000 crore added 5.1 percent more permanent workers. A similar trend is observed with medium-sized companies whose annual sales fall between Rs 250 crore and Rs 500 crore.

Despite the adverse impact of demonetization wearing off, other disruptive reforms such as the implementation of the Goods and Services Tax (GST) have affected the earnings of small companies. This downturn has caused them to be more cautious with respect to fresh hiring. The employee growth rate of companies with net income less than Rs 50 crore fell by 28.8 percentage points, from 37.7 percent in FY17 to 8.9 percent in FY18. The trend is negative for all companies with incomes less than Rs 250 crore. The underperformance of small and medium companies have pulled down overall employment growth in 2018. Public sector companies have overtaken their privately-owned counterparts in creating jobs. The rate of addition of jobs in the private sector slowed down to 6.3 percent, whereas that for public sector undertakings (PSUs) went up manifold to 8 percent.

The majority of PSUs are in the banking and financial sector, ship building and crude oil. The strong performance of these sectors have helped propel an expansion in their employee base.

Although there are many outliers, the data reveals that the rate at which jobs are added roughly corresponds with the pace at which the economy grew during the course of the year.
Rohan Abraham
TAGS: #agriculture #chemicals #Crude oil #employee growth rate #IT #manufacturing #public sector units #Telecom
first published: Aug 8, 2018 07:53 pm