The domestic electronics manufacturing sector in India has seen significant growth in the last six years. Production of electronic goods in India increased by 187 percent from Rs 1,90,366 crore in 2014-15 to an estimated Rs 5,46,550 crore in 2019-20, with a compound annual growth rate (CAGR) of about 24 percent, according to the Ministry of Electronics & Information Technology’s annual report 2019-20. 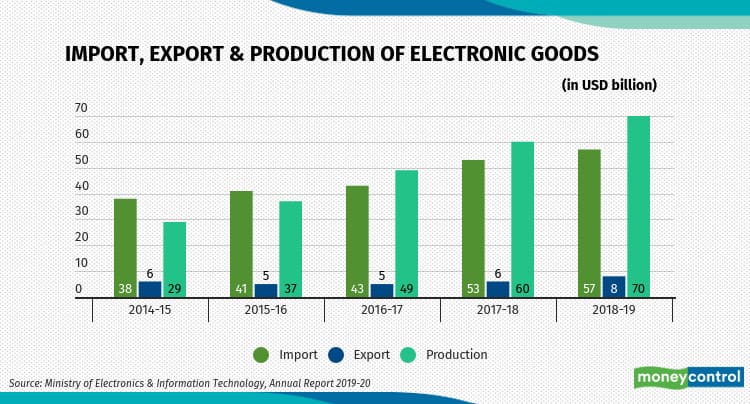 This is an optimistic development for the domestic industry, with India having a huge market for electronic goods and products. The rise in domestic production will also help India reduce import dependency, bringing down the trade deficit and encouraging further adoption of the government’s call for ‘Make In India’ and ‘AatmaNirbhar Bharat’ or self-reliant India.

Mobile phone production accounts for 41 percent of the total electronic production (in value) in the country at present, up from its 10 percent share in 2014-15. The mobile phone sector has seen a significant jump over the years, with India now becoming the second-largest mobile handset manufacturing country in the world.

Another sector that has witnessed similar growth is the light-emitting diode industry, popularly known as the LED products industry. The domestic manufacturing of LED products grew over 7X from Rs 2,172 crore in 2014-15 to an estimated Rs 16,250 crore in 2019-20. Though production in the LED sector is burgeoning, it currently comprises just 3 percent of the total electronics production in the country. The rise in demand for LED products can be attributed to low cost, increased use in residential (including street) lighting and commercial segments, in addition to sectors such as automotive, communications, signalling and entertainment.

Strategic electronics production — such as equipment catering to defence, nuclear and aerospace industries — recorded a 109 percent increase from Rs 15,700 crore in 2014-15 to an estimated Rs 32,800 crore in 2019-20. The computer hardware industry, however, reported the least — 20 percent — increase compared to other sectors. Personal computer/ desktop penetration in India is 15 per 1,000 people compared to 784 per 1,000 in the US and 41/1,000 in China, indicating the potential in the India market.

Production-Linked Incentive scheme to be a game changer: experts

To boost the country's manufacturing industry further, on November 11, 2020, the government approved a Production-Linked Incentive (PLI) scheme for 10 key sectors. Electronics/technology products is one of these 10 sectors, with a financial outlay of Rs 5,000 crore over five years. The government had earlier notified PLI for mobile manufacturing and specified electronic components with an outlay of Rs 40,951 crore.

Industry experts have hailed the government's decision of introducing PLI schemes across key sectors in a move to encourage domestic manufacturing.

PLI scheme will be a game changer. It has given a boost to Electronic Manufacturing and now others sectors too are getting included. @PMOIndia @NITIAayog https://t.co/3i2cv7bXZb

The announcement of PLI scheme for ten sectors by the Government today is a major boost for the manufacturing sector: Dr Sangita Reddy, President, FICCI.#FICCISpeaks pic.twitter.com/hXqDOzpX7c

The initiative is bringing the “most sophisticated lines of manufacturing, including top-of-the-line handsets, which are the most popular and costliest across the world, and these are starting to get manufactured today in India,” Sawhney said.
Chaitanya Mallapur
TAGS: #DATA STORY #electronics #India #manufacturing #production
first published: Nov 19, 2020 11:00 am