Higher dropout rates in schools and discrimination in offices have led to low participation of women in organised workforce.

Kavita Rao was attending a job interview for a position as data analyst at an IT-services firm in Bengaluru. One of the questions puzzled her. She was asked if she will be able to 'handle' pressures of the work since she recently got married. Rao wondered if her male friends were asked the same.

In another part of India, Disha Basu was asked if she will be 'allowed' to work after 6 pm since her house was two hours away from her office in Purulia, West Bengal.

These are some of the questions, and factors that have led to a drop in the percentage of women in the country's labour force, a sobering thought as the world celebrates Women's Day.

The Labour Force Participation Rate (LFPR) of females in India is among the lowest in the world. And this comes as no surprise. Human resource officials said that both organisational and societal factors play a role in the fewer number of women joining the workforce. 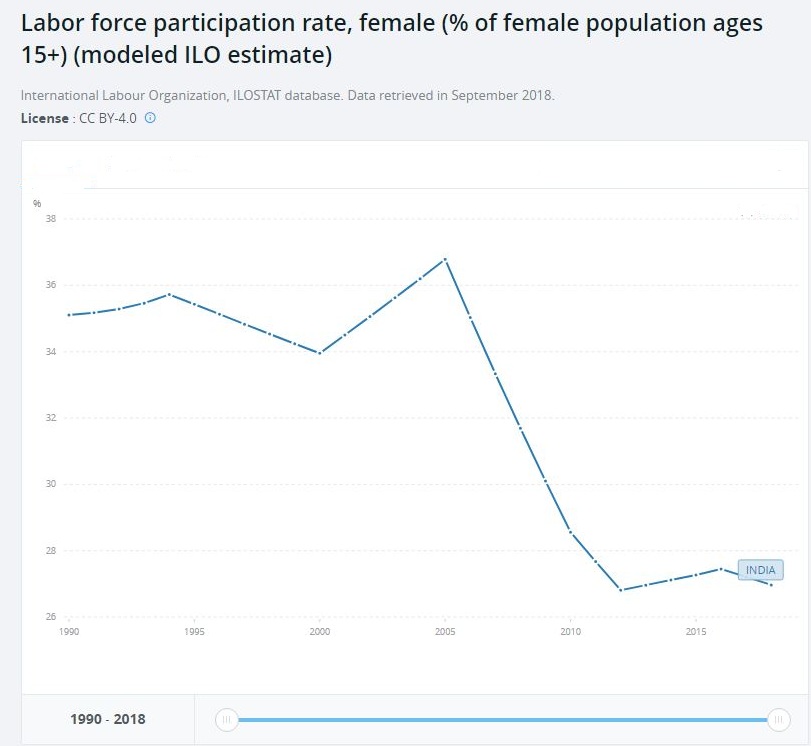 The NSSO's periodic Labour Force Survey Report for 2017-18 that was accessed by Business Standard said that the decline in LFPR for females (age group of 15 years and above) was between 2011-12 and 2017-18.

What caused the decline in rural areas?

A direct link to the decline in the number of women in rural areas is also related to the number of girls dropping out of school, post puberty.

Human resource officials add that non-availability of basic facilities like clean toilets and long commute dissuade parents in remote locations from sending their daughters to school once the girls attain puberty.

In many areas, daughters are sent to girls' only schools after attaining puberty. These schools often have poor infrastructure and teaching facilities that impact their learning outcomes.

A report by Pratham (Annual Status of Education Report-Rural) 2018 said that 13.5 percent women in the age group of 15-16 years are not enrolled in school. In states like Gujarat and Madhya Pradesh, it is higher at 24.9 percent and 26.8 percent respectively.

There is a subject-wise difference as well. The ASER report said that for the age group 14 to 16 years, the all India figure for the proportion of girls who can read at least an Std II level text is very similar to that of boys, at 77 percent.

However, the report said that in basic arithmetic, boys seem to hold a substantial advantage. Nationally, 50 percent of all boys in the age group 14 to 16 years can correctly solve a division problem, as compared to 44 percent of all girls.

Then there is the lack of jobs for women in rural areas too, resulting in a lesser number of them being part of the formal workforce.

Saundarya Rajesh, founder of Avtar Group, a diversity and inclusion consulting company said that there are more women in rural areas who are graduating and end up being over qualified for the kind of jobs that are available.

"There is a dearth of formal sector jobs in rural India. Apart from government initiatives like Mahatma Gandhi National Rural Employment Guarantee Act, which guarantees 100 days of paid labour on public works projects per year, other formal jobs usually employ men," she added.

Rajesh also explained that most salaried jobs are in the cities, towns and big villages. Hence, availability of transport and allied infrastructure has an impact on women's participation in the workforce, more so in the rural areas.

But, some companies have made inroads into increasing diversity in rural India. Rajesh cited instances of Tata Motors, Yamaha and Dell India practicing such initiatives.

Tata Motors has set up skill development centres across all plant locations, where it targets 50 percent to be women primarily from rural/small towns/economically-deprived areas. The pilot batch that the company started last year had 70 percent women.

Similarly, the automotive firm has a state-approved apprenticeship programme under the Swarn Jayanti Rozgar Yojana and saw 200 women being hired. The duration was three years, during which the women received industrial training and appeared for an Industrial Training Institute (ITI) examination at the end of each year. Upon completion of their term, the women received state approved ITI certification and an on-job training certificate by Yamaha.

In urban areas, pre-conceived notions and biases have led to women either choosing to stay at home, or dropping-out of the workplace after a while.

Catalyst, which is a global non-profit firm working on women's inclusion in the workplace, said that Indian women face a complex set of socio-cultural challenges.

"These include social expectations and stereotypes about gender roles, the complicated clashes between modernisation and tradition, and the impact of globalisation. There is an absence of reliable infrastructure outside of work, including daycare or transportation options," as per a report by Catalyst.

Apart from issues around maternity benefits, the pay gap is also a clear factor that exists. The Monster Salary Index released this week said that Indian women earn 19 percent less than men.

Here, the median gross hourly salary for men in India in 2018 stood at Rs 242.49, while for women it stood at around Rs 196.3. Even though sectors like IT/ITeS employ a higher number of women, there is a 26 percent pay gap between men and women. 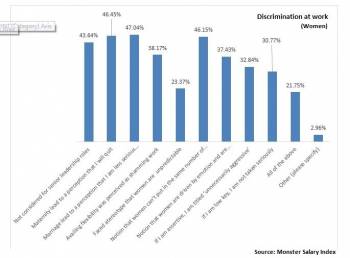 Kamal Karanth, co-founder of staffing firm Xpheno said that apart from the societal factors in play, some subconscious biases at the workplaces also had a role to play when it came to women's participation in the workplace.

"The questions asked to a woman are different than what is asked to a man even in job interviews. A man will be judged based on his professional qualifications while there will be conversations around the likelihood of marriage and pregnancy in a prospective female candidate," he added.

Flexi-working is also a facility offered by companies on paper. But when it comes to implementation, it is not uniform. Rajesh said that flexibility is at the core of the labour force participation rate of women in the country and that this should be taken seriously.

Sectors-based biases also exist. For instance, manufacturing firms traditionally employ men in large numbers. HR consultants said that even if a woman is eligible, these companies would not hire them.

"For a large engineering services firm in Odisha, we had recommended three women who were qualified for the position. But the company specifically asked for men saying that the job will be 'physically demanding'," said a New Delhi-based head of a large staffing company.

Earlier, the law allowed three months or 12 weeks of maternity leave which has now been extended to 26 weeks as per the Maternity Benefit (Amendment) Bill, 2016. This new law will apply to all establishments having 10 or more employees and will be applicable only for the first two children.

For smaller companies, the real challenge according to HR consultants is keeping the number of women constant.

"SMEs have expressed displeasure with the 26 weeks maternity leave. This will mean that these firms will avoid hiring women which will further impact labour force participation," added a staffing firm CEO.

The Catalyst report said that nearly half of surveyed companies (48 percent) reported not offering any family care options such as on-site/near-site child care, emergency child care, referral and support services for child and elder care.

"Such a lack of organisational support for post-leave caregiving responsibilities raises questions about the extent to which India Inc is fully supporting women's ability to successfully integrate work-life needs," it said.

According to a 2017 World Bank report, less than a third (27 percent) of women who are 15 years or older are working or actively looking for a job. Three of every five prime working age Indian women (26-45 years) are not economically active, meaning that these individuals are neither working on a farm or in businesses nor are they earning any wage.

Only few countries such as Afghanistan, Pakistan and Saudi Arabia rank lower than India, which is an outlier with far lower female LFPRs compared to most countries at the same level of income.

A Deloitte report on empowering women released on March 7 said that empowering girls and women through targeted education and reskilling interventions, combined with reframing societal constraints, can potentially accelerate their learning and enhance their skill sets.

This, it said, will result in women emerging as an equitablestakeholder in the workforce, households, and communities.