To understand the coastal and ocean concepts better, it needs to be highlighted that most coastal regions remained quite undeveloped in India for centuries.

Recently, at a packed Confederation of Indian Industry (CII) event in Mumbai, Nitin Gadkari, Union Minister for shipping, ports and roads unveiled part of his grand plan for reshaping and remaking India. Gadkari talked about the steps his ministry has been taking to promote coastal businesses in India, part of his ambitious Sagarmala project,.

To understand the coastal and ocean concepts better, it needs to be highlighted that most coastal regions remained quite undeveloped in India for centuries. Contrary to global experience where coast-based industries are the fastest to grow and emerge, India witnessed a stay-away-from-coasts approach for more than a thousand years: The Chola kings, who sent navies to southeast Asia, are the only major example of sea-faring. A Hindu proscription of ocean-crossing meant that merchants who took cargoes overseas were generally from other communities. Broadly speaking the need for a navy was perceived only after the British came to these shores.

Much later, a rigid coastal regulatory zone (CRZ) made it difficult for the development of any industry or commercial activity near the coast. This was abetted by a myopic Navy, which saw any civilian activity on Indian shores as a potential threat to security. Both concepts were in sharp contrast to global experience (take for instance Portsmouth or Glasgow in the UK) where private leisure boats bob up and down near naval frigates. The activity keeps naval supervisors alert, to ensure that no private boats come within a prescribed perimeter around naval vessels. Somehow, policymakers forgot that a vibrant coastline actually enhances security with eyes-on-the-ground. They overlooked the fact that the most economically vibrant economies had industrial complexes next to the sea so that goods were easy to import and export. Mercifully, India has awoken from that myopia. That is why the vision of both prime minister Modi and Gadkari is refreshing. It promises an economic bonanza that was almost stunted and repressed for decades if not centuries.

Gadkari’s Sagarmala project has three parts to it. For a better understand of the entire Sagarmala project, it is worth listening to a 30 minute interview of Rajive Kumar, secretary. shipping, ministry for shipping, ports and roads, government of India at http://www.asiaconverge.com/2016/12/coastline-and-waterways-mean-jobs/

The first is coastal development through the development of more commercial industrial hubs (coastal economic zones or CEZs) close to the coast (see map).

The second is to promote waterways and even river transport. 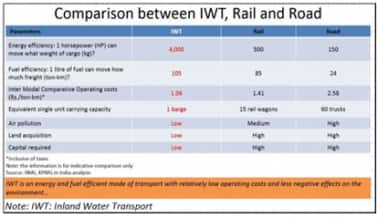 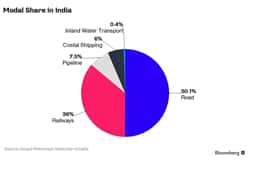 And the third is to promote coastal shipping and coastal tourism. Gadkari chose to speak of the third.

Many logistics experts talk of a thumb-of-rule estimate of transportation costs. They say that if it costs Rs.1 per tonne per km to move goods through international waters, it coasts Rs.3 when coastal tourism, is involved. River transport could cost a bit more at Rs 4. Railways would cost Rs 6-8, and road transport could cost as much as Rs 12. True, this 1:3:4:6:12 formula is simplistic, as there could be other variables involved. But the fact remains that water transport is cheaper. Even an analysis of India’s own numbers confirms this (see chart). Clearly, India had forgotten the cheaper route and had opted for the most expensive mode instead.

However, developing the coast, and coastal tourism presented two challenges. Previous governments had introduced two sets of laws which hindered the implementation of any such plans. One was the vexatious CRZ rules. The second was reserving the right of Indian-flag vessels to operate along the coast of India – cabotage rules. The former prevented the exploitation of the coast for seaside resorts. The second prevented any foreign vessel from exploiting the transport potential of Indian ports.

To be fair, it is necessary to let Indian flag-vessels to benefit from a national coast, and not let foreign vessels exploit business opportunities. Hence what this government has done is to tweak the laws in such a manner that it allows only specific, specialised foreign-flag vessels to operate along India’s costs. Among the vessels identified are cruise liners (India has hardly any world-class cruise liners since the business opportunity was denied to them) and ro-ro boards. The latter would allow cars and trucks to roll-on and roll off large vessels (hence the name ro-ro).

Thus, a truck laden with goods could roll on to a vessel in Gujarat and then drive off the boat in say Chennai. That would save the costs of travel, as well as time (of unloading from the truck at Gujarat and then locating and then re-loading the goods on a truck at Chennai). The ro-ro boats would also be immensely useful when it comes to promoting cargo movement using river transport.

But, there was a third missing link. India had laws for ships which took vessels from one port to another. Like aircraft, they had to inform the authorities of the port of origin, and the destination port. They were not supposed to drop anchor anywhere between these two points. India also had laws for fishing boats, which allowed them to venture into the seas, catch fish and return to shore. But there was no law for leisure boats that could begin journey at one port and then stop a couple of hours at another port and then either proceed to a third port or return to the port of origin. This stunted the leisure boats industry. Gadkari has begun to create a set of rules that allow leisure boats to operate along India’s shores.