Study overtakes work as common reason to move to UK, but not for Indians

Education has overtaken employment as the most common reason (since 2012) to move to the United Kingdom. However, for Indians, working in the UK still is more popular than getting a British degree.

This assumes importance because there is a general perception that work visas will be tightened in the UK as a consequence of Brexit (United Kingdom’s exit from the European Union). Indians, however, form the largest chunk of international skilled professionals with a Tier 2 (work visa) in the UK.

Moving to the UK for work

Indian nationals account for half of all Tier 2 visas granted, and the number of grants increased by 3 percent to 57,199 in 2019. The Home Office statement said there was an 11 percent increase in Tier 2 work visas granted due to a rise in grants in the ‘Tier 2 – General’ category (up 49 percent to 36,237) and the ‘Tier 2 – Dependant’ category (up 41 percent to 25,912). This visa category has been rising steadily since July 2018 ever since the restriction on hiring foreign doctors and nurses under the Tier 2 category was removed.

In the Tier 2 category, almost half (45 percent) of the visas granted were ‘’intra-company transfers’. However, the Home Office said there has been a fall in grants in this category over the last year (down 13 percent to 51,283) following a stable trend since the end of 2014.

Moving to the UK for education 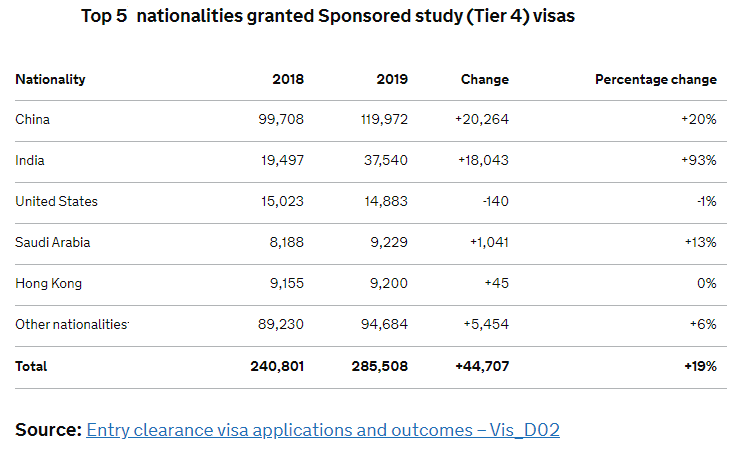 The UK is considered the most expensive country when it comes to higher education with fees ranging from 15,000 pounds to 50,000 pounds per annum. Cost of living is an additional expense considering restrictive real estate prices in the United Kingdom.

In addition to those coming on Tier 4 visas, there were 119,839 short-term student visas granted in 2019. This was a 5 percent YoY increase and the highest level on record.