State of the economy: Q1 GDP hints at resilience amid rising rates

Gross domestic product is estimated to rise 15.4% in the three months to June from a year ago, according to a Bloomberg survey of economists.

India’s economy probably grew at the fastest rate in a year last quarter driven by healthy consumption, but the pace of expansion is seen slowing as policymakers prioritize rising prices over growth.

Gross domestic product is estimated to rise 15.4% in the three months to June from a year ago, according to a Bloomberg survey of economists. That’s the fastest reading since the April-June quarter of 2021 and compares with a 4.09% expansion in the previous three months. 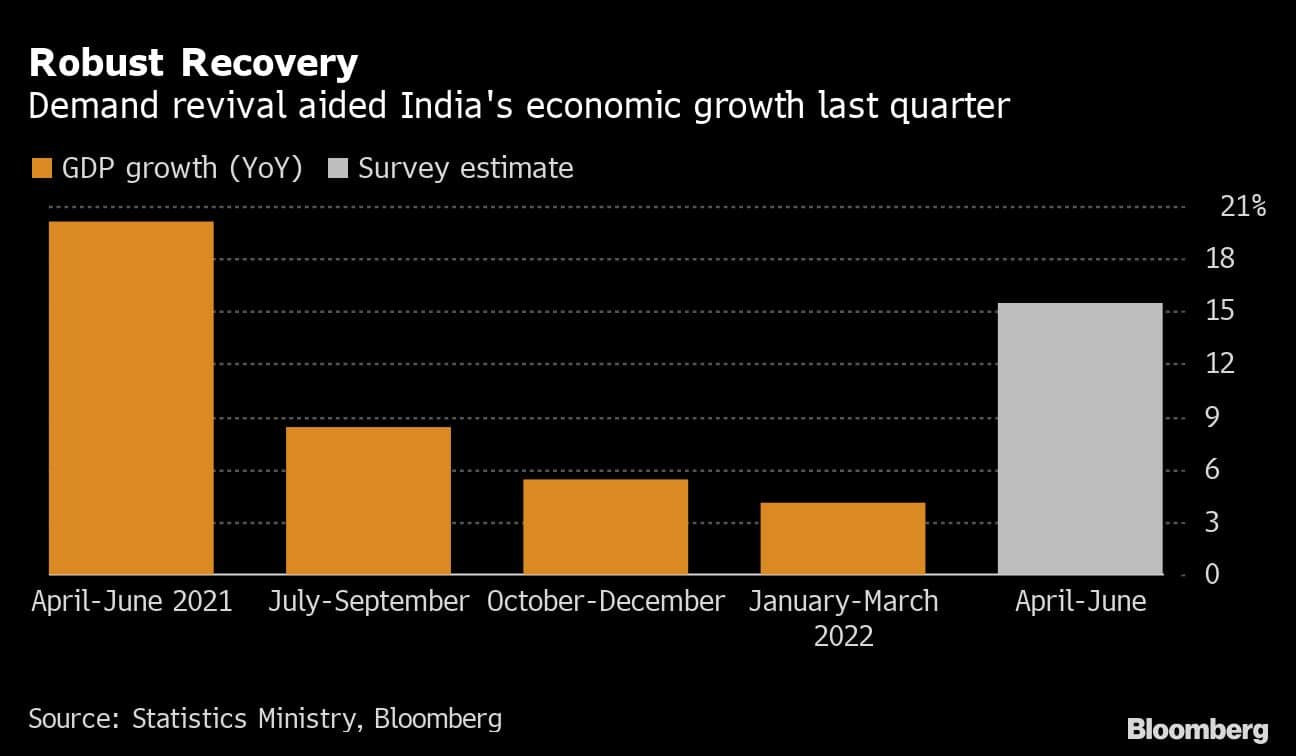 The Statistics Ministry is due to release the data for the first quarter of the fiscal year that started April 1 at 5:30 p.m. India time on Wednesday. Stock and bond markets will be shut on the day for a local holiday.

Resumption of activity in India’s dominant services sector, following the lifting of pandemic curbs, and a record jump in exports added to the momentum. The pace will likely moderate in coming quarters as the central bank raised rates by 140 basis points  this year to bring price gains under its 6% target ceiling.

“The resilient growth backdrop means the RBI will retain its focus on containing inflation,” said Rahul Bajoria, an economist with Barclays Bank Plc. “That makes its policy choices relatively clear, in the short term,” he said, projecting another 50 basis points of rate hikes over two meetings in September and December.

The International Monetary Fund sees Asia’s third-largest economy sustaining its world-beating growth tag as the lender estimates a growth of 7.4% this year and 6.1% thereafter. A fast pace of expansion is crucial for India to attract investors and create jobs for its growing population.

Besides rate hikes, a global slowdown will also weigh on the Indian economy. The US Federal Reserve’s resolve to keep raising rates until inflation comes under control may hurt Indian exports and thus drive domestic output lower.

The Indian rupee Tuesday dropped to a fresh record low and key stock gauges declined amid a global surge in risk-off sentiment after central bankers delivered a hawkish message at Jackson Hole.

Challenges also remain on the domestic front from rising prices of key staples such as rice and wheat amid factors such as climate change. If not contained, this could again fuel food inflation, which comprises about half of India’s consumer price index basket.

“Exogenous forces will act as counterweights, including impact of the heatwave on farm output followed by uneven start to the monsoon, sharp rise in commodity prices impinging on corporate margins and an uncertain global environment,” said Radhika Rao, an economist with DBS Bank Ltd.

For now, indicators are giving mixed signals on activity going forward. While global demand is softening, government spending and a possible pick up in private investment is stoking hopes of a revival.