The Cabinet has approved the restructuring of the scheme for agro-marine processing and development of agro-processing clusters (SAMPADA).

Food Processing Minister Harsimrat Kaur Badal said the SAMPADA scheme is going to be an overarching umbrella scheme. It is a step in the direction to build National Food Grid in the country –where there will be a seamless transfer of food from production to consumption without wastage, she said in an exclusive interview to CNBC-TV18's Shereen Bhan.

“In a nation that has the second largest population in the world, one of the biggest national services you can do is to eliminate wastage and ensure food is available for all,” said Badal.

She also ensured that this infrastructure of cluster scheme, mini food parks, units inside the park, balance mega food parks and cold chains will all be ready within 24 months. 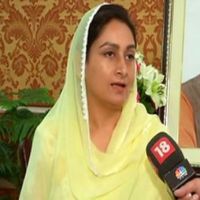 Q: Can you take us through the details of the Scheme for Agro-Marine Processing and Development of Agro-Processing Clusters (SAMPADA) scheme that has got the approval of the Cabinet. I understand that this is a Rs 6,000 crore scheme that will largely target small and medium enterprises (SME) within the food processing sector.

A: Absolutely. This is one of the Honourable Prime Minister's most revolutionary things which have happened till now, I would say in the last three years where we are actually working towards building a National Food Grid in the country where there should be seamless transfer of food from production till consumption without any wastage at all.

The SAMPADA scheme which aims towards supplementing agriculture, modernising processing and decreasing agri-waste. This new scheme, in the next two years, when every scheme is going to be operational on the ground is actually going to change the entire food scenario because I truly believe that in a nation which has the second largest population in the world, one of the biggest national services you can do is to eliminate wastage and ensure that food is available for all. On one side, we have millions who sleep hungry and on the other side we have huge amounts of wastage.

So, working towards ensuring that everybody sleeps on a full stomach, we must ensure there is zero wastage, which is why I say this SAMPADA scheme is going to be an overarching umbrella scheme. When my ministry was setting up mega food parks and cold chain, but what was really needed was something which impacts the farmers and then the Prime Minister talks about doubling farmers' income, we are really going to see it happen on the ground through this scheme which has three very important components which I would like to point out which have been added now.

First of all, we are going to, through technology, map every cluster in the country, what kind of processing facility is available and what kind of storage facility is available. And then, in a very targeted fashion, set up infrastructure at that farm gate level so that that cluster of whatever it produces can have storage, preservation, processing as well as marketing linkages.

So, number one, make farmer-producer organisations where all farmers are collected, put them together and then give them the facility for which we often hear the farmers say that when the crop comes in, we do not get proper rates, but three months down the line, they sell for three times the amount, but we have no choice we have to distress sell. So, this will straight away address that because we will give them the infrastructure to be able to preserve it and to store it and even to process it and to market it.

And this will directly and indirectly benefit almost 20 lakh farmers and create employment for over six lakh people. So, you can that Rs 6,000 crore over the next five years and we are talking about this is the money for the next five years, but our target is that within the next two years, whatever the proportion comes per year is all done by two years when eventually, the Rs 6,000 crore will leverage over Rs 31,000 crore and process over 1,00,000 metric tonnes.

So, today when our nation is processing only 10 percent of the milk, of the fruits of the vegetables of the meat, poultry, everything. We are looking at this becoming to at least double the figure and impacting more food availability for our people to eat and at reasonable prices.

A: Last year, the Honourable Prime Minister agreed to 100 percent foreign direct investment (FDI), multi-brand retail of food produced and manufactured in India. So, with that we are working towards creating those big retail markets which in turn are going to be supplied by this infrastructure that we are going to put up.

And like I said, our infrastructure is all targeted to 18-24 months. Just to give you an example, at the speed that we are working, my mega food park and cold chain scheme which were launched in 2008 and to put up park or one cold chain, the timeline is 3-4 months. So, we had 42 mega food parks which had been sanctioned till 2008 and when I took over in 2014, there were just two which had become operational. But since 2014 till now, we have made eight more operational and four more are ready to be inaugurated, they are just waiting for me to get there and give them the time to do it.

If we talk about the cold chain, 100 of them had been sanctioned since 2008 and only 30 had become operational in 2014. We have not only made all 100 operational, but we sanctioned 30 new ones and half of those are already ready and last month, I had sanctioned 101 more. So, we are very particular on our timelines with regular monitoring. And like I said, this infrastructure of the cluster scheme, mini food park, units inside the park, balance mega food parks and cold chains will all be ready within 24 months.

Q: Since you talked about food and multi-brand retail, let me ask you about that long-pending decision that we are awaiting for more clarity on whether you are going to provide any relaxation as far as food retail is concerned. Where do things stand? It has been going back and forth for inter-ministerial consultation for several months now. When do we expect a decision on whether food retail will be provided relaxation and non-food items can also be sold via the food retail route where 100 percent FDI is allowed?

A: Like I told you the last time as well that is World Food India that we are having from November 3-5 which is going to be the first international mega event which has ever taken place in India on the levels of Anuga or SIAL which are the biggest food fairs in the world. We are hosting that in India from November 3 to November 5 where there is going to be huge international participation and huge participation from our states. It is actually going to transform the food economy of India for the times to come.

Now, before this food fair takes place, we are very clear. We are looking at each and every sector, be it machine manufacturing, be it processing, be it retail, be it technology, be it cold chains. In every sector, what are the issues that that sector is facing and we are working with states and central government. If there is a policy in the centre which needs to be addressed, if there is something in the states, we are taking out a model food processing policy for the states to adopt and like I said, whether home kept products are going to be allowed, if there is going to be a relaxation, that decision is definitely going to be in place before November.