Nitin Gadkari said his ministry has no dearth of resources but was lacking on two fronts - shortage of contractors and capacity constraints. He also said the Centre will spend around Rs 5,000 crore over the next five years for plantation, beautification and modernisation along the highways.

Union minister Nitin Gadkari said roads and ports sectors will create over 50 lakh jobs in the next five years and contribute nearly two percent to the country's GDP.

"Since the time I have taken charge, the number of projects undertaken have risen. We have taken various initiatives in port development, waterways and road projects. I expect these sectors will contribute nearly two percent to the GDP in the next five years," Gadkari, who is the surface transport and shipping ministers, said in a select media briefing.

He said his ministries intends to create nearly 50 lakh jobs over the period. Talking about the progress made in the road sector, he said of the 283 stalled projects 44 have been terminated and of these remaining, nearly 90-95 percent of the issues are resolved.

He said the government intends to award 100 projects on public private partnership (PPP) basis next fiscal. "We are seeing an improvement in investor sentiment and interest from both domestic and international players in investing in the country's infrastructure projects. We have awarded nine projects in this year so far and by March end it will increase to up to 15 projects. Our target is to award 100 projects on PPP basis," he said.

He also said the government has also undertaken steps to award projects under the hybrid model, where 40 percent cost will be borne by the government while 60 percent will be funded by the developers. Of the 60 percent banks will provide 30 percent of the requirement, he said.

About Delhi-Jaipur Highway, he said the Rs 1,700 crore project will be completed by December this year as 85 percent of the long-delayed project is completed while problems related to Delhi-Haridwar and Ranchi-Jamshedpur highways were being addressed.

Nitin Gadkari said his ministry has no dearth of resources but was lacking on two fronts - shortage of contractors and capacity constraints. He also said the Centre will spend around Rs 5,000 crore over the next five years for plantation, beautification and modernisation along the highways.

The BJP leader from Nagpur further said the work on the 1,620 km stretch between Varanasi and Haldia under the clean Ganga mission will start by this year-end. "We have already acquired the land near the banks of Varanasi and Haldia. We hope to start the dredging work by December end," Gadkari added. 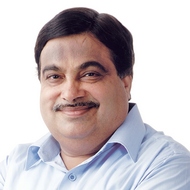