India’s recovery from the Covid-19 pandemic has boosted equity markets, with the Sensex scaling a fresh record high on November 24, but there are signs that the economic recovery is entering the slow lane, according to analysts at Societe Generale.

“As a consequence of the exaggerated K-shaped recovery – aided by rapid economic formalisation – the informal sector, India’s largest job generator, and MSMEs are losing out to big businesses,” they added.

To be sure, India will be among the fastest-growing economies this year despite global headwinds, including financial market volatility and sharp monetary tightening across the world.

The county’s private sector capital expenditure is improving after several years as, according to the finance ministry’s chief economic adviser. Continued economic reforms over the medium term will help boost the potential growth beyond the currently estimated 6 percent, Goldman Sachs has said.

The central government is expected to present its budget for the next financial year on February 1 amid expectations that it would continue with reforms and infrastructure spending.

The divergence between the strong equity market and weak economy will likely continue because of sharply lower unit labour costs and as most bigger corporates have adequately deleveraged, cushioning them from impact of rising cost of capital, according to the Societe Generale analysts.

Still, there are signs that all is not well.

While India will be the fastest-growing G20 economy this year, according to forecasts by the International Monetary Fund, the growth is still well below pre-pandemic trend. 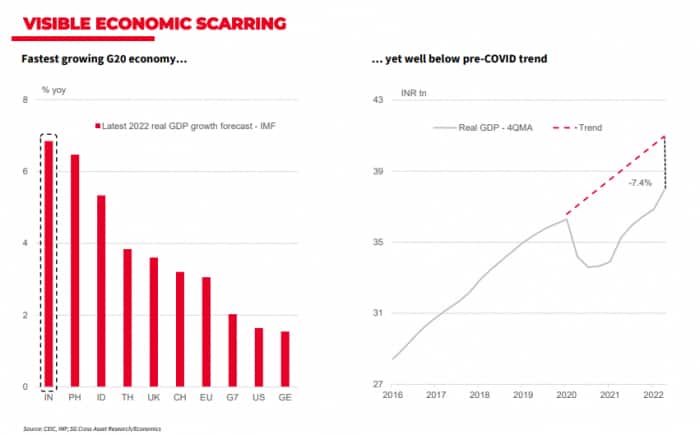 And while capacity utilization has surged in recent months, bolstering hopes of a revival of private investments, this key metric has yet to exceed pre-Covid average, they added. Slowing exports -- outbound shipments shrank on year in October for the first time in nearly two years -- also continue to be a cause for concern while discretionary demand, though rebounding, continues to be below trend. On the bright side, inflation is expected to ease into next year, giving the central bank to address the economic stress and to soon end its rate-hike cycle, the analysts said. 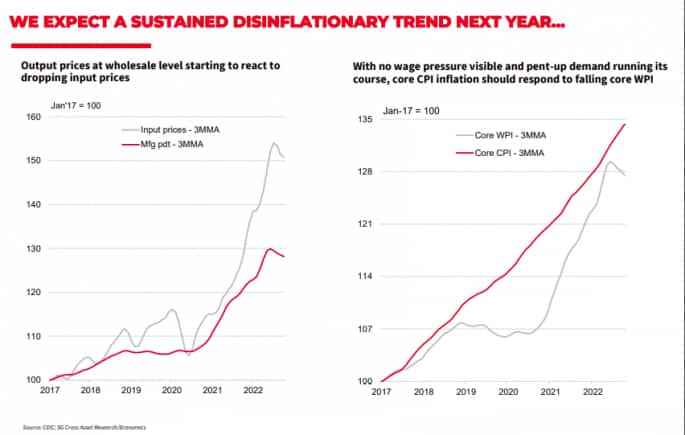 The house pencils in two additional rate hikes, of a cumulative 60 basis points, taking the terminal policy rate to 6.5 percent, before the central bank refocuses on growth.