In a letter, Venkaiah Naidu has said that no builder should ask customers to pay higher tax rate on installments to be received after the imposition of GST.

Days after the Finance Ministry warned builders of stringent action for asking homebuyers to make the entire payment for the houses purchased by them before the GST roll out, housing minister Venkaiah Naidu has written to chief ministers of all the states to ensure real estate developers pass on the benefits of lower tax burden to homebuyers and don't charge higher taxes from them after the Goods and Services Tax (GST) kicks in from July 1.

“It is expected that the builders will pass on the benefits of lower tax burden as result of GST to the buyers in the form of reduced prices/installments. Hence, I would like to request the state government as well as builders’ associations to ensure that no builder/construction company ask customers to pay higher tax rate on installments to be received after the imposition of GST,” Minister of Urban Development (MoUD) Venkaiah Naidu said in a letter.

“My ministry has received a reference from the department of revenue stating that various representations/complaints have been received by states and the Central Board on Excise and Customs (CBEC) that the buyers who have booked flats and have made part payments are being demanded to make entire payment before July 1, 2017 to avoid higher tax incidence after July 1, 2017,” the letter said.

The letter further said that such activities are against the GST law. 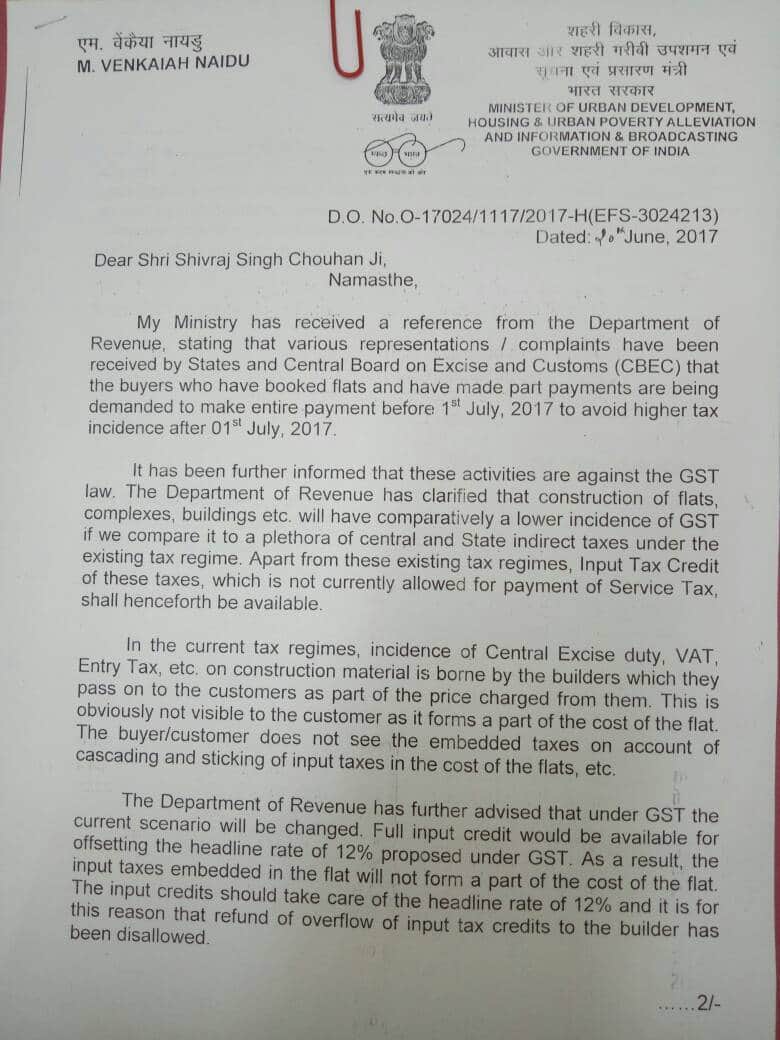 "The Department of Revenue has clarified that construction of flats, complexes, buildings etc will have comparatively lower incidence of GST if we compare it to plethora of central and state indirect taxes under the existing tax regime. Apart from these existing tax regimes, Input Tax Credit of these taxes, which is not currently allowed for payment of Service Tax shall henceforth be available,” it said.

In the current tax regimes, incidence of Central Excise duty, VAT, entry tax etc on construction material is borne by the builders which they pass on to the customers as part of the price charged from them. This is obviously not visible to the customer as it forms a part of the cost of the flat. The buyer/customer does not see the embedded taxes on account of cascading and sticking of input taxes in the cost of the flats etc, the letter said.

“The Department of Revenue has further advised that under GST the current scenario will be changed. Full input credit would be available for offsetting the headline rate of 12% proposed under GST. As a result, the input taxes embedded in the flat will not form a part of the cost of the flat. The input credits should take care of the headline rate of 12% and it is for this reason that refund of overflow of input tax credits to the builder has been disallowed,” the letter added.

The Finance Ministry had warned last week that if any builder resorts to such practices, "the same can be deemed to be profiteering under section 171 of GST law".

A committee would be set up to look into the complaints with regard to the anti-profiteering clause that seeks to prevent companies from making undue gains post GST rollout, it had said.

In a statement issued last week, the apex body of real estate developers CREDAI had said that “imposition of GST of 12 percent on land values may give rise to additional tax burden, especially where land values are a high proportion of costs. CREDAI would strive towards absorption of additional burden in an equitable and transparent manner between the developer and the consumer. In particular, CREDAI would endeavor to avoid additional GST demand on consumers for projects nearing completion.”
Tags: #CREDAI #Economy #GST #India #Real Estate
first published: Jun 21, 2017 08:02 pm