Is it true that the decline in goods exports in June this year was due to a large base effect, as the commerce secretary has been quoted as saying?

Let’s consider actual numbers rather than year-on-year growth. There were refinery shutdowns during June 2019, which is one reason why exports were lower. But non-petroleum products exports too were low at $22.3 billion. That’s the lowest level since November 2018. And it’s lower than the level they were at in April, May, June, August, September and October 2018. If you want to go further back, the level of non-petroleum exports in June 2019 was lower than in September 2014.

Of course, the trade wars and protectionism have had an impact. But didn’t the Economic Survey argue that our exports are such a minor proportion of world trade that we could always increase market share? As the data show, so far that has remained a pipe dream. 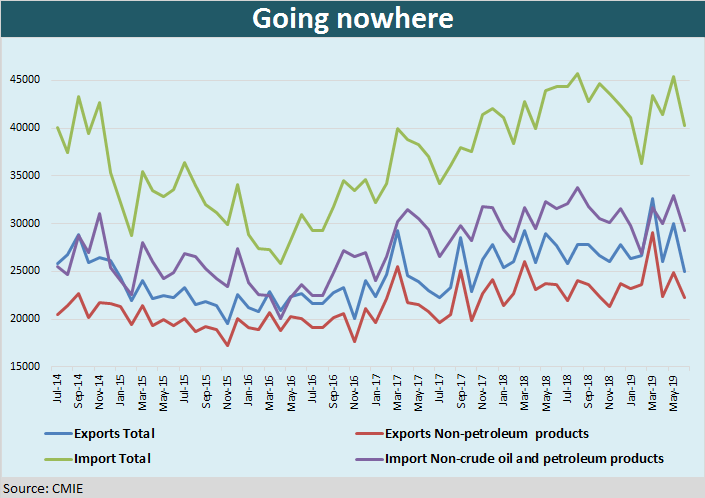 But what’s startling is that the level of non-crude imports in June 2019 was lower than in June 2017.

Non-oil, non-gold & silver imports were at $26.7 billion in June 2019, lower than their level two years ago. What’s more, this fiscal year, they have been lower every month compared to the same month last year. This could be partly due to higher tariffs but more likely it’s a reflection of lower demand.

Export growth has turned negative for several Asian nations and is a reflection of the uncertain trade environment. But there are exceptions -- Vietnam’s economy grew 6.7 percent in the June quarter, riding on the back of strong exports.

Simply put, unless we become a more productive economy and are able to reduce costs, our export growth will continue to sputter. Putting up tariff barriers will only add to costs and inefficiencies.