Data due today is likely to show gross domestic product in the year to March 2022 grew 8.7% from a year ago, according to the median estimate in a Bloomberg survey. That’s slower than the 8.9% expansion projected by the Statistics Ministry three months ago.

Horses in Paharganj market in New Delhi, India, on Wednesday, May 11, 2022. Indias central bank will raise its inflation forecast in the June monetary policy meeting amid elevated commodity prices, possibly setting the stage for more interest rate increases by August, a person familiar with the matter said.

India’s economy probably grew slower than previously estimated last year, with virus curbs in the final quarter seen as a drag on activity while the war in Europe has added a new inflation hurdle to recovery.

Data due today is likely to show gross domestic product in the year to March 2022 grew 8.7% from a year ago, according to the median estimate in a Bloomberg survey. That’s slower than the 8.9% expansion projected by the Statistics Ministry three months ago. 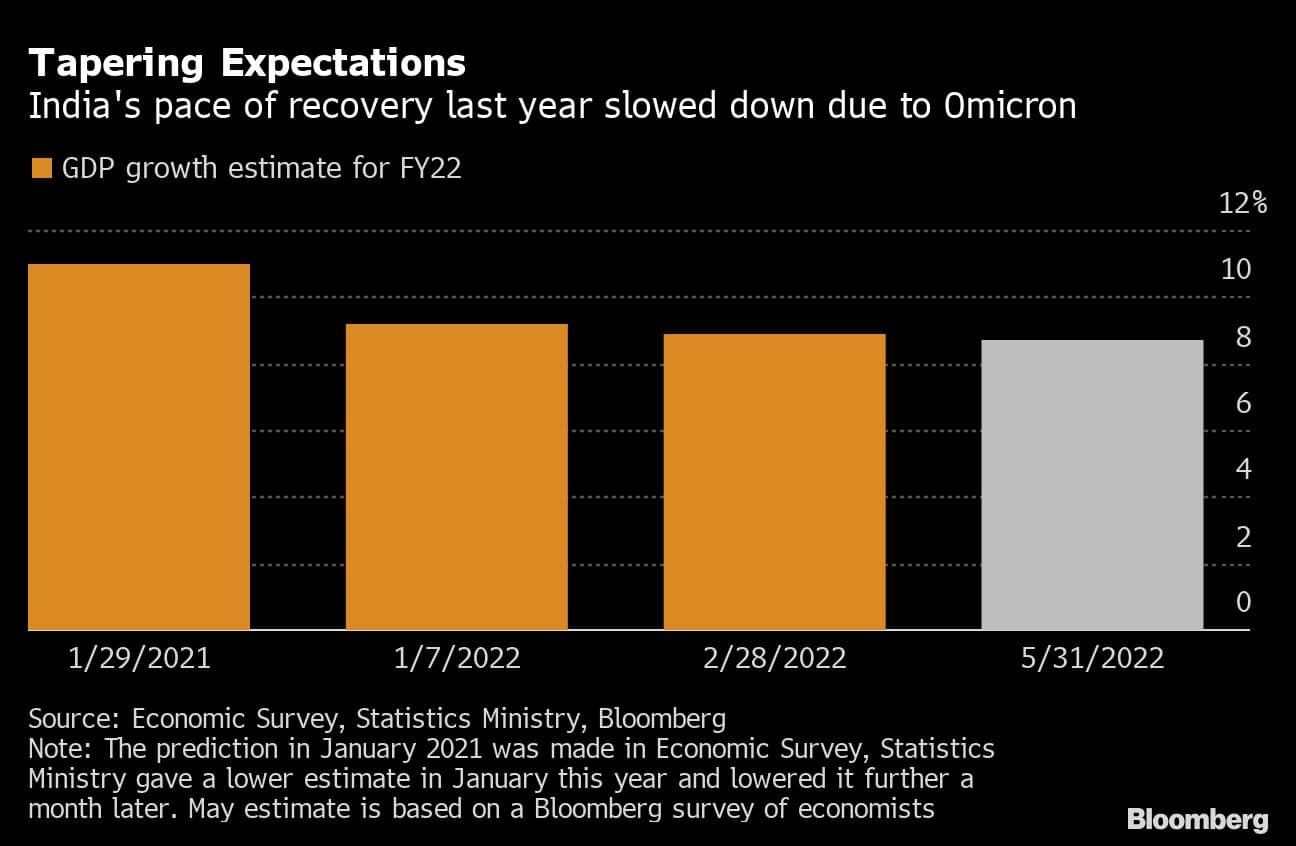 In the January-March quarter, the economy likely expanded 3.9%, according to the survey, a performance that will mark the low point of the year.

The pace of growth eased amid the surge in omicron infections and temporary activity restrictions, said Rahul Bajoria, chief India economist for Barclays Plc. “While the movement restrictions were short-lived, other headwinds from global supply shortages and higher input costs also impeded the pace of expansion.”

Asia’s third largest economy had just begun recovering from the pandemic-induced slump when a surge in Omicron cases in January brought back some of the virus-related restrictions. The war in Ukraine, in February, further added to its woes, pushing up commodity prices and squeezing supplies further.

Earlier this month, elevated prices forced India’s central bank to hike rates by 40 basis-points in an off-cycle meeting. Governor Shaktikanta Das, who is due to next review monetary policy June 8, has signaled more hikes to tame inflation, a move that may hurt demand further.

“Elevated commodity prices, slowing global growth and monetary policy tightening across most markets are likely to weigh on growth prospects,” said Teresa John, an economist with Nirmal Bang Equities Pvt in Mumbai. “We continue to expect contact-intensive services to lead the economic recovery even as high commodity prices weigh on manufacturing margins.”

Here are the other results from the Bloomberg survey: