Indian employees satisfied with job but not with pay: Survey

There was a 21 percent drop in pay satisfaction in 2018 compared to a year ago.

Companies have been going cautious on pay hikes considering a slowdown-like situation in the country. Hence, it does not come as a surprise that there is a dissatisfaction with the compensation levels.

There was a 21 percent drop in pay satisfaction in 2018 compared to a year-ago period. 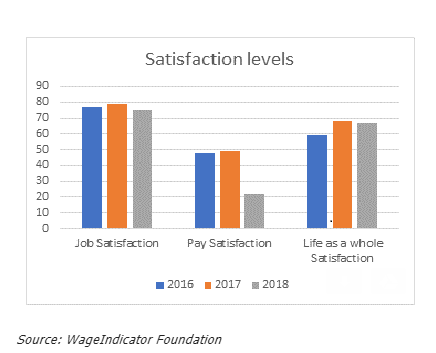 Out of the various factors that are responsible for this level of satisfaction, employees were most satisfied with the relationship with colleagues and superiors, at a level of 92 percent and 87 percent respectively in 2018.

Krish Seshadri, CEO, Monster.com - APAC & Middle East, said, "It is a positive sign that only three among all the recorded industries have a satisfaction level less than 70 percent and none below 50 percent. This will help the respective sectors instill optimism in the economy, in-turn helping in improvement of the general sentiment."

Information & Communication Technology Services has registered the highest growth in the level of satisfaction among all recorded sectors, gaining 3 percent over the recorded satisfaction level of 75 percent in 2017.

Education and research have registered the steepest fall in the satisfaction level to 53 percent in 2018 from 73 percent. Similarly, the manufacturing and BFSI sectors saw a drop of 6 percent and 4 percent in the level of satisfaction.

It is also to be noted that the job market in the country has been lukewarm over the past few quarters. This is due to signs of slowdown that has led companies to postpone fresh hiring plans and go very selective on replacement hires as well.

While the survey does not throw light on why employees are satisfied with their current jobs, HR experts point out that employees have little choice but to stick to their current organisation since there is a dearth of jobs in the market.
Moneycontrol News
Tags: #Business #Economy #HR
first published: Nov 14, 2019 03:37 pm