The Covid-19 pandemic has brought in a "new normal" and largely changed the economic landscape and business environment. As per (KPMG, 2020), the pandemic will change the scenario across the world with cash being the king, business organisations leaning towards variable cost models, supply chains being made more resilient with the call being “Vocal for Local”, policymakers being agile and re-strategising and redesigning various policies.

What do Economic Indicators suggest?

Economic activity and market sentiments saw an uptick with the opening of the economy in Unlock 1.0. As per CMIE (Centre for Monitoring Indian Economy), the worst seems to be over for the Indian economy and the unemployment rate (30 days moving average) is settling at 8.4% as of July 15, 2020, a tad higher than pre-COVID levels as against 27.1% in May 2020 (due to supply chain disruptions and massive job losses). Rural employment numbers are leading the economic recovery for India with a 7.3% unemployment rate as against the urban unemployment rate of 10.8% for mid-July 2020. The reasons that can be ascribed to better employment numbers in the rural sector are a better than normal monsoon, availability of water in reservoirs for irrigation, aggressive implementation of the MGNREGA scheme by the Government and enhanced sowing activities. As per estimates, the Indian agricultural sector is expected to grow at 3 percent despite lockdown. 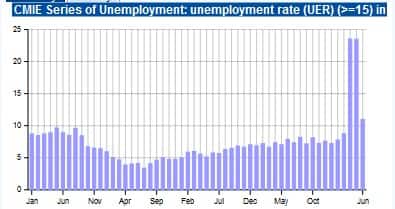 The Ministry of Finance has announced that the Goods and Services Tax collected in June 2020 was Rs. 90,917 crore (90 percent of the revenues in the same month last year). The collections in April and May 2020 during the period of lockdown was relatively lesser and stood at Rs. 32,294 crore and Rs. 62,009 crore respectively.

Interestingly the collections in June 2020 are closer to those in the month of January 2020 which was at Rs. 1,10,828 crore. These revenue numbers are indicative of the fact that a revival is underway and collections will only improve in the near future with production levels increasing. These are all signs of green shoots of recovery happening in the economy. However, these tax collection numbers need to be considered with a pinch of salt as they do not necessarily relate to transactions in May alone. 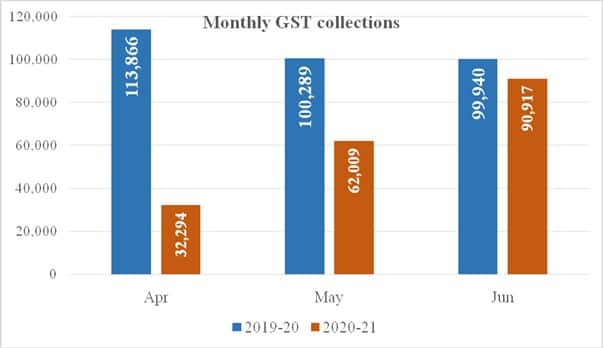 E-way bills generated in June 2020 was to the tune of 42.7 million equivalent to Rs. 12.4 lakh crore as against 40 million bills of Rs. 11.43 lakh crore in March this year, a clear indication of the fact that movement of goods was nearing the ranks of pre-lockdown days. Rather, numbers for power demand also reflect that the slump has narrowed to 2.6% in July 2020 as against 9.6% in June. This is again reflective of an increase in commercial and industrial activities across the country. Analysts are hopeful that the demand for power will reach normal levels by August 2020.

The CPI inflation trajectory showed a decline from 7.2 percent in April to 6.1 percent in June 2020. The inflation numbers came down due to food inflation declining with the advent of Unlock 1.0. Food inflation, especially for vegetables and fruits, had risen to 23.6 percent in April due to supply chain disruption, a fallout of the lockdown. In June the same declined to 1.9%.

On the other hand, core inflation due to demand destruction had softened to 4.8% in May but showed a rise in June to 5.2 percent. However, this rise can be attributed to an increase in prices of petrol, diesel, gold and healthcare.

Crude oil prices due to low demand coupled with the price war between the global players ie Saudi Arabia, Russia and the United States of America had dropped to as low as $19.34 per barrel in April 2020. With the opening up of economies world-over, crude oil prices have recovered and are trading in the range of USD 43.05 in mid-July 2020.

Gold being a safe and less risky investment as per the report titled 'Gold Mid-Year Outlook 2020' has the current business environment of high risk and uncertainty, low opportunity cost and a positive price momentum working in its favour. These inflation numbers are further expected to decrease with a normal monsoon having a favourable effect on the agricultural sector and core inflation should further steady itself with production levels increasing and having a positive impact on consumer sentiments. The index of industrial production, which is representative of manufacturing, mining and electricity continue to witness a broad-based contraction although at a slower pace. Economic activity in India hit a trough in April 2020. The numbers improved from a contraction of 57.6% YoY in April to 34.7% YoY in May 2020.

Data showed that manufacturing activities fared better than the previous month but was still suffering from the aftereffects of the extended lockdown and weak demand in the Indian economy and world over. Amongst the 23 industrial groups within manufacturing, pharmaceuticals scored a positive growth of 2.5 percent YoY.

However, in the case of use-based classification of goods, consumer durable and capital goods suffered the largest loss in May which is reflective of lower capital investments. Stimulus measures announced by the government of privatization of power distribution in Union Territories, privatisation of public sector enterprises, an increase in FDI limit in the defense manufacturing from 49 percent to 74 percent under the automatic route will yield results with reference to capital investments in the medium to long term.

The positive news was that with lockdown restrictions easing, purchasing manager index (PMI) has improved from 30.8 in May to 47.2 in June. In the short term, IIP is expected to see a temporary uptick due to pent up demand and sales for small ticket and mid ticket products witnessed a pick-up in June and the first week of July 2020.

To take an example, for sectors such as automobile and retail, sales were seen to be higher in May and June against dispatches of vehicles with bookings reaching 85-90 percent of pre-COVID levels forcing manufacturers to ramp up output. The manufacturers are meeting the pent-up demand by adding factory shifts and hiring more workers. These numbers are forecasted to further improve come festival season with rural demand and traction for SUVs leading the way. Rural India has also been the frontrunner in demand for two-wheelers sales post-announcement of Unlock1.0 and 2.0.

Market leader Hero MotoCorp's June sales were seen to be four times compared to May 2020 thereby being a confidence booster for the manufacturing sector. Also, in view of the shortage of manpower due to migrant labourers going back to villages, efforts by some employers have been of arranging chartered flights and promising accommodation at worksites and even better wages to get them back to work. This is a definitive sign of improved economic activity compelling employers to rush to the labour market.

Not to forget, central government schemes such as Mahatma Gandhi National Rural Employment Guarantee scheme (MGREGs) (additional allocation of Rs 40,000 crore) and  'Garib Kalyan Rozgar Abhiyaan’ worth Rs 50,000 crore along with a good rabi crop, normal monsoons and the limited spread of the pandemic in villages is auguring well for rural India and thereby increasing the demand for FMCG products. According to analysts, the consumption rate of FMCG goods in Rural India has already touched 85 percent of pre-COVID levels in May as against 70 percent in urban areas.

What does the Sensex show?

With the Unlock happening and the industry and investor sentiments improving the BSE Sensex index was found to be the second best-performing equity index across the globe.

The downward trend has long since been reversed and the S&P BSE Sensex, bellwether index recovered to an extent of 34 percent in June 2020 from March 2020 lows that it had touched. There has been a sense of heightened optimism in the stock market which a rising number of COVID cases, India-China border standoff and the grim economic outlook has also not been able to dampen. As of mid-July, the BSE Sensex touched approx. 36,371.68 as against 25,981.24 on March 23, 2020. The current rally has been fueled by an influx of liquidity of $17-18 trillion stimuli infused worldwide by countries to resuscitate their economies. As per analysts, this has also been driven by lack of alternate attractive investment opportunities world over. The story told by Foreign Exchange reserves and trade numbers……

RBI is thus in a position and ready to buffer the financial market against any contagion. This rise in forex reserves is due to the rise in foreign investments by foreign portfolio investors who have acquired stakes in Indian companies in the past two months resulting in an inflow of $2.75 billion in the first week of June. Foreign inflows are expected to cross the $500 billion mark with Jio Platforms garnering over Rs 1 lakh crore worth of foreign investments.

Rising foreign exchange reserves helps strengthen the foreign exchange rate. The forex reserves in today’s date are adequate to cover one year’s import bill for India thereby, demonstrating the backing of domestic currency by external assets and generating confidence for markets and investors.

The silver lining has been that after a period of 18 years trade balance for India has turned into a trade surplus with the balance in June being in the country’s favour at $790 million. Indian exports of 12 out of 30 major items turned positive during the month but on the whole, exports have contracted and shrank 12.41 percent to $21.91 billion in June due to lower international demand for petroleum, textiles, engineering goods, and gems and jewellery.

On the other hand, imports have also contracted for 26 out of the 30 principal items and have dropped to $21.11 billion i.e. a fall of 47.59 percent portraying a decline in domestic demand.

Interestingly, import demand for medicinal and pharmaceutical products, vegetable oils and pulses tell a different story. The bright side to the trade story is that exports are back on track and have touched 89 percent of June 2019 levels. Also, according to SK Saraf, President, Federation of Indian Export Organisations (FIEO), exporters have been receiving a lot of queries from countries where anti-China sentiments are high in today's date.

This is perhaps the right time for India to conclude trade agreements with EU, Australia and New Zealand and bring the Regional Comprehensive Partnership Agreement (RCEP) back on the discussion table. A trade surplus, rising foreign exchange reserves and rising foreign investments augur well for the Indian rupee and will help it appreciate against the dollar thereby recovering lost ground of 4.6 person in 2020 against the American currency.

In its Global Manufacturing Risk Index Report for 2020, Cushman and Wakefield has ranked India third, with China and the US retaining the top positions. In its annual ranking of 48 countries spread across Europe, Americas and the Asia Pacific, India has a competitive advantage from operating conditions and cost competitiveness perspectives and is slated to be an upcoming manufacturing hub globally.

While economic indicators are showing a revival of the Indian economy post easing of restrictions, localised lockdowns can very well throw a spanner in the revival growth story. Localised lockdowns and tight social distancing measures will again result in disruption of economic activity and cut off supply chains thus dampening the sentiments of Indians.

It is imperative that the government neutralises the spread of the pandemic and both Centre and State work hand in hand as even short duration lockdowns in industrial pockets can hamper revival.