India GDP: After nearly 24% contraction in Q1, all eyes on Q2 data due on November 27

A number of high-frequency indicators have shown gradual signs of pick up, pointing towards overall economic recovery in the country. In fact, by September, indicators like vehicle sales, real estate, manufacturing PMI, and railway freight earnings, had outstripped September 2019

After the steepest fall in its independent history during the lockdown months, India’s economy is recovering. Just how strong the beginning of that recovery has been will be clear when the National Statistics Office releases the July-September quarter gross domestic product data on November 27.

India’s GDP contracted by a whopping 23.9 percent contraction in the April-June quarter of the current fiscal year, which were primarily the months of a nationwide lockdown due to the Covid-19 pandemic

Barring the agriculture sector, which grew 3.4 percent during the quarter, all other segments were in the red during the first quarter of 2020-21. Manufacturing, mining and construction contracted 39.3 percent, 23.3 percent and 50.3 percent respectively, while trade, transport, communication and related services contracted by 47 per cent.

Since then, a number of high-frequency indicators have shown gradual signs of pick up, pointing towards overall economic recovery in the country. By September in fact, indicators like vehicle sales, real estate, manufacturing PMI, and railway freight earnings, had outstripped September 2019.

The IHS Markit Manufacturing PMI rose to 58.9 in October, the highest in more than a decade, compared to 56.8 in September, driven by robust sales. State Bank of India (SBI) revised their second-quarter GDP projection to a contraction of 10.7 percent from a contraction of 12.5 percent earlier, according to a research report from SBI Ecowrap. 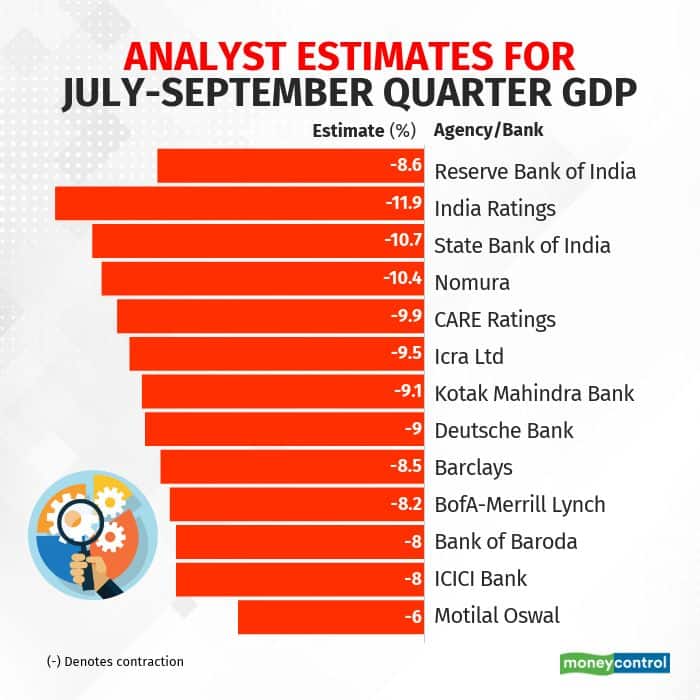 According to an RBI report, the economy may have entered into a technical recession for the first time with two successive quarters of contraction. The central bank expects the September quarter to post a contraction of 8.6 percent.

Care Ratings estimates the contraction in the July-September of this fiscal year, to be 9.9 percent, while rating agency ICRA estimates it to be 9.5 percent.

The government has been relying on some 60 high-frequency indicators to chart the recovery of the economy. A number of officials expect that the economy could be back in positive growth territory by the January-March quarter. That optimism will be put to test on Friday evening.
Kamalika Ghosh
Tags: #Economy #GDP data #growth #India #Q2 GDP #Q2 GDP data #recession
first published: Nov 26, 2020 07:13 pm