India bulks up against outflows as Fed, virus risks threaten repeat of 2013

Asia's third-largest economy has bad memories of past attempts by the Federal Reserve to get away from crisis-mode policies, particularly in 2013 when mere talk of "tapering" stimulus prompted the rupee to sink to record lows.

India's $600 billion in reserves should help it fight market volatility from any US monetary tightening, but analysts and traders warn a slowing economy and an expanding fiscal deficit still make it particularly vulnerable to capital flight.

Asia's third-largest economy has bad memories of past attempts by the Federal Reserve to get away from crisis-mode policies, particularly in 2013 when mere talk of "tapering" stimulus prompted the rupee to sink to record lows.

Now, with the Fed again giving increasing thought to when it will need to reduce stimulus, India's rupee is back under pressure, having fallen 1.8 percent over the past four weeks. While India's increased currency reserves are expected to boost resilience this time -- $604 billion now compared with $270 billion in 2013 -- a more gloomy economic outlook puts new pressure on the financial system. 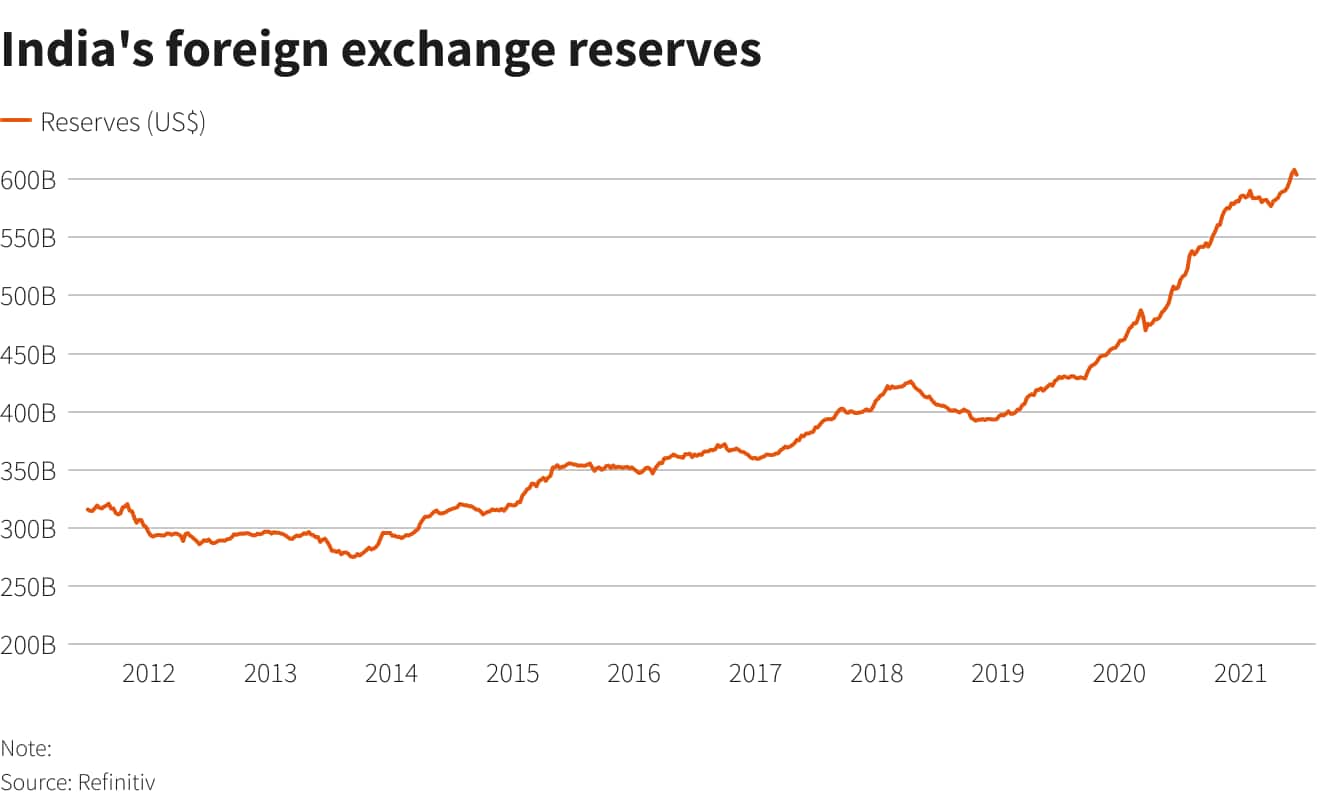 "In 2013, there was much greater confidence about the Indian economy. What scares me is the economic outlook," said Alok Sheel, Reserve Bank of India chair professor at New Delhi based think tank ICRIER.

"Real growth in the pre-pandemic year was 4 percent and now the average growth expected over the next three years is well under 3 percent which is even lower than 4 percent which we thought was a disaster," he said.

That concern has already rattled some in the financial market who worry about India's high budget deficit, relatively larger growth declines versus its peers, and the risk of a third coronavirus wave amid a largely under-vaccinated population.

"It is not enough to have strong forex reserves, inflation is on stress, the central bank has already spent so much ammunition on defending the bond yields and now they will have to defend the rupee from weakening," a foreign fund manager told Reuters.

The fund manager, who declined to be named, sold his entire $150 million portfolio in Indian government securities earlier this month after hawkish comments from the Fed. He has bought Thai securities with some of those funds.

Jason Yek, senior Asia country risk analyst at Fitch Solutions, said he is watching India's ratio of foreign exchange reserves to external funding requirements, which he says is far lower that most others in Asia and its emerging market peers.

Such risks are also causing concern for those in government.

"Risks from inflation, rupee volatility against the dollar and higher interest rates in western countries have all become real. We will have to monitor," said a senior government official on condition of anonymity.

The official said while reserves should partly help shield the rupee, both the government and RBI are working on plans to contain volatility if the Fed moves sooner than expected to raise rates and roll back the amount of stimulus it gives the economy.

India's finance ministry and the RBI did not comment on the story.

The world's central banks have started to lay the groundwork for a transition to life with less stimulus as pandemic-hit economies recover, with many countries already signalling moves to the exit.

Fitch's Yek said the RBI is also likely to defend weakness in the rupee to ensure it can keep a lid on imported inflation from rising global crude oil and commodity prices, which would limit its ability to keep monetary policy accommodative.

"As markets begin to price in global policy normalisation, the strength in the dollar along with rising crude oil prices are expected to weigh on the rupee," said Upasna Bhardwaj, an economist with Kotak Mahindra Bank.

India is the second biggest oil importer in Asia after China and a weaker rupee will result in painfully more expensive imports.

Some economists believe even with large reserves, panic could ensue if the RBI is forced to sell $20 billion to $30 billion over a week to defend the currency.

"India's macroeconomic fundamentals do not look good in comparison with its emerging market peers," ICRIER's Sheel said. "It's also far more exposed than the rest of Asia's developing economies."