The Prime Minister has constantly been reminding people that he wants to promote a cashless society. The theory is that with a more transparent transaction process, the country will grow stronger financially.

The government wants to promote e-payments.  The Prime Minister has constantly been reminding people that he wants to promote a cashless society. The theory is that with a more transparent transaction process, the country will grow stronger financially.

In reality, there is growing evidence that there is potential for government-owned corporations to swindle both the government and consumers by using off-the-book transactions while using the e-payment route.  The examples given here are only a minuscule tip of the proverbial iceberg.  But the implications and consequences can be mind-boggling. First, let’s consider the good news.  E-payments are growing.  The latest RBI annual report does confirm that e-payments have been swelling (see table). Between 2014-15 and 2016-17, the volumes of electronic transactions increased by an impressive 135 percent in terms of total retail payments. During the same year, volumes went up by 133 percent if one takes into account all electronic payments – both retail and non-retail. 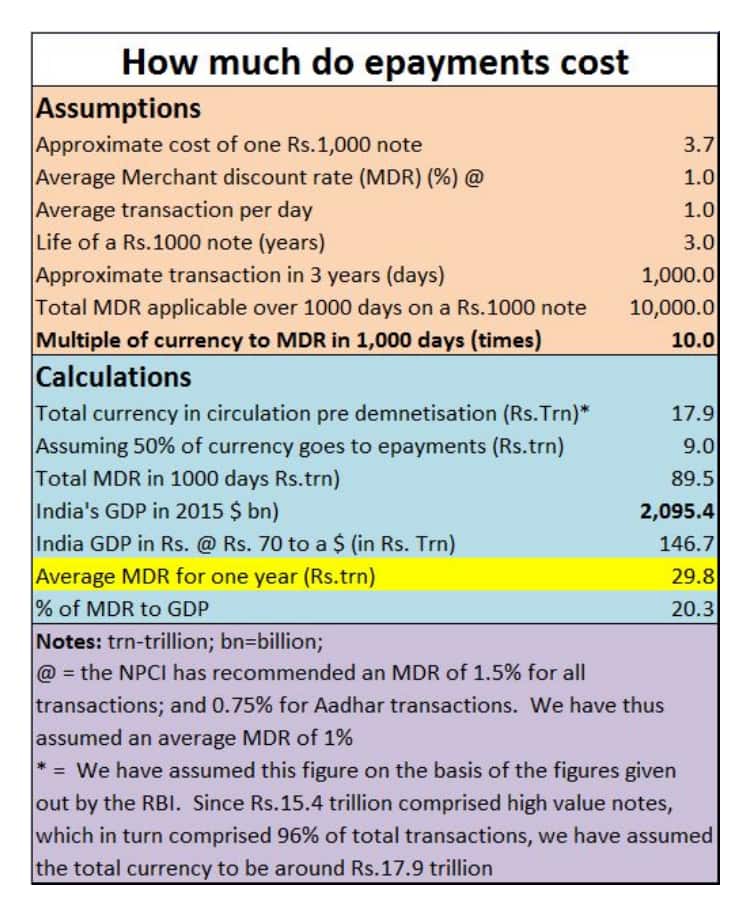 Even in value terms, the growth was clearly evident. Over the same period (between 2014-15 and 2016-17) retail payments grew by 45 percent, while the growth was 36 percent if all electronic transactions were considered.

Of course, the base was small, so the high rates of growth should be taken with a pinch of salt. India still has a long way to go before it becomes a cashless society. But the onward march of e-payments is evident, and the growth rates are strong.

If that is the good part of the story, there is a worrisome part of the story as well. E-payments are likely to cost the citizens immensely – though the costs will be paid in such minuscule amounts that most customers won’t even notice it. It is like the proverbial Chanakya quote that taxes should be taken in much the same way as the honeybee sucks nectar from the flower.  The flower enjoys it.  And the bee gets its fill as well.

Look at the chart alongside.  Even if one assumes a 1 percent merchant discount rate or MDR (the charge merchants charge banks for enabling e-payment transactions), the costs are whopping. Our estimate is that if one takes 50 percent of the total transactions to be through the electronic mode eventually, the country could end up paying 20 percent of its GDP as margins to e-payment enablers.

Since all costs are inevitably paid by consumers, they will end up paying this cost.  No wonder then, the number of promoters opting to be e-payment enablers has been increasing.  They have all sensed the moolah that is there to be taken.

And this is where we come to the ugly part. There are indications that some government-owned  corporations – not all, mind you – have begun a very clever method of off-the-book transactions using the e-payment route.

Take the case of the Municipal Corporation of Greater Mumbai (MCGM).  It has a huge budget – larger than that of several small states (see chart). 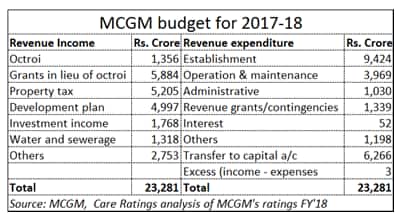 It sends out bills for water and property and also collects money for a variety of services. In all payments pertaining to the water department – it could be happening in all departments – the modus operandi is simple. If the bill is for Rs 100, and you pay the bill electronically, the receipt is for Rs 100. No problem with that. Then, you get the information from the bank that the amount debited to your account is higher than the amount billed.

Earlier the bank used to inform clients that the payment had been made to payu.in.

Payu.in is an enabler which is believed to be owned by a South African conglomerate.

However, during the last six months, the debit instructions to the banks show that debit is being made in favour of timesofmoney.  Enquiries show that this ‘timesofmoney’ has no relationship to the publication with a similar name.  It appears that this is a legacy name inherited from Times Bank and Times Guarantee, and the new owners have begun enabling e-payment transactions on behalf of the MCGM and many other clients as well.

The problem is not whether the payments are enabled by payu.in or timesofmoney.  The problem is that MCGM’s receipts do not reflect the service charges. So the charges are paid to someone, who now cannot come under the purview of MCGM’s auditors.  They also, thus, move out of the purview of the state and central auditors who look into financial deals that MCGM has with other parties.

When contacted,  MCGM’s water department blithely replied on June 16, 2017, that “the convenience fees charged for online payment of water charges bills is charged by the vendor or agent through whom the payment has been made. This fee is not charged by MCGM, so it is not reflected on the receipt.”

But then wasn’t the vendor selected by MCGM?  Isn’t this a cost being incurred on behalf of transactions that MCGM wanted enabled?  MCGM’s water department was informed by the author: “Not including those charges could be interpreted as a collusive deal between you and the third party vendor to keep such earnings out of the purview of the auditors if MCGM and the state government. If this is not remedied, [the complainant] will be compelled to file a police complaint of wilful attempt to you defraud customers. Please be advised to change your practices with immediate effect.”

The practices were not changed. Consequently, a police complaint was filed last month, and the matter is now under investigation.

Surely, the government must realise that the telecom bandwidth is the responsibility of Meity. But financial transactions should come under the Finance Ministry or the RBI.  Is the government creating a structure that will abet more such potential scams? 3. By keeping such transactions off-the-books, MCGM’s potential for collusive deals with vendors could amount to as much as Rs 250 crore a year. And since such practices – according to reliable reports – are now being adopted by other quasi government agencies in other cities and even in other states, the potential for off-the-book collusive deals could be as high as a few thousand crores each year.

4. The fact that officers of the MCGM can do this with impunity – not providing a receipt for the full amount is an offence – suggests the involvement of bigger people as well.

5. The fact that the government at the Centre has not come out with a regulator for e-payments, and the fact that the Finance Ministry has been kept out of regulating e-payments makes the entire situation quite murky. It stinks.

So, will the government move in quickly to prevent such devious and sharp accounting practices? Or will it wait for a scam to take place first, and then seek to put in measures that are aimed at cleaning up the system? Or will it be another public interest litigation that will make the courts step in once again to remind the government about how rules should be framed?

There are so many questions.  But, sadly, there are no answers forthcoming.