The biggest gainer of this marginal positivity is the blue collar profile. The hiring sentiment for blue-collar profiles has witnessed a 10 percent growth post re-opening of businesses.

With a partial lifting of the Coronavirus-led lockdown, there is a revival in hiring across sectors in India. The TeamLease Employment Outlook for H1 (April to September 2020) said that the hiring sentiment is showing early signs of revival.

According to the report, this hiring sentiment which took a beating and sunk by 86 percentage points from the previous half-year is showing signs of gradual improvement since Unlock 1.0.

Until Unlock 1.0, the hiring sentiment (intent to hire) for the current half-year was as low as 11 percent. As per the report, this has now improved to 18 percent.

This edition of the Employment Outlook Report uses an Intent to Hire metric instead of the 'Net Employment Outlook'. For the current half-year, the 'Intent to Hire' metric is defined as the percentage of employers that are likely to hire employees during this period. This is different from the previous half-years, where the Intent to Hire metric was defined as the percent of employers that are likely to continue hiring at least the same number of employees in a given period. Out of the 21 sectors analysed barring for travel and hospitality, all the other sectors, though in varying degrees are positive about hiring according to the report. With work from home becoming the new norm, the telecom sector is also seeing a rise in intent to hire with a 15 percent increase since Unlock 1.0.

Among the various locations, Bengaluru leads the way with respect to hiring people. This is despite the fact that there has been a significant drop in hiring plans since the October 2019 to March 2020 period. Delhi, Hyderabad, Chandigarh, Mumbai, and Kolkata are among the other leaders in the cities looking to hire.

Locations like Chennai, Nagpur, Coimbatore, Kochi, and Indore are among cities with the least intent to hire. 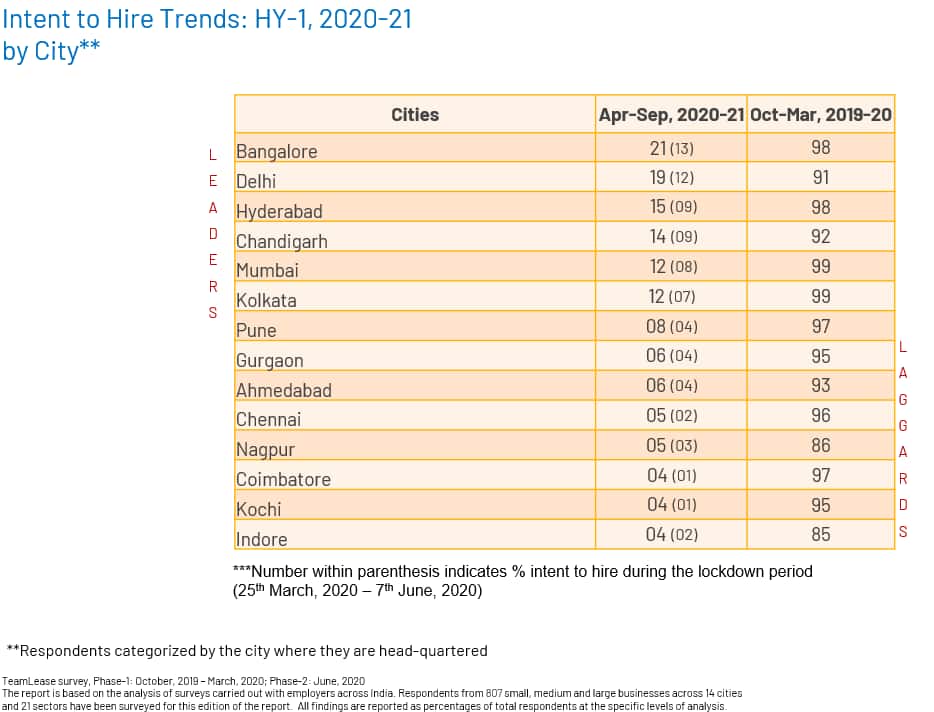 The report said that the biggest gainer of this marginal positivity in hiring is the blue-collar profile.

Here, the hiring sentiment for blue-collar profiles has witnessed a 10 percent growth post-reopening of businesses. Further, as more companies look for talent who can steer ships out of troubled waters, the demand for senior-level is also witnessing a growth in this sentiment. 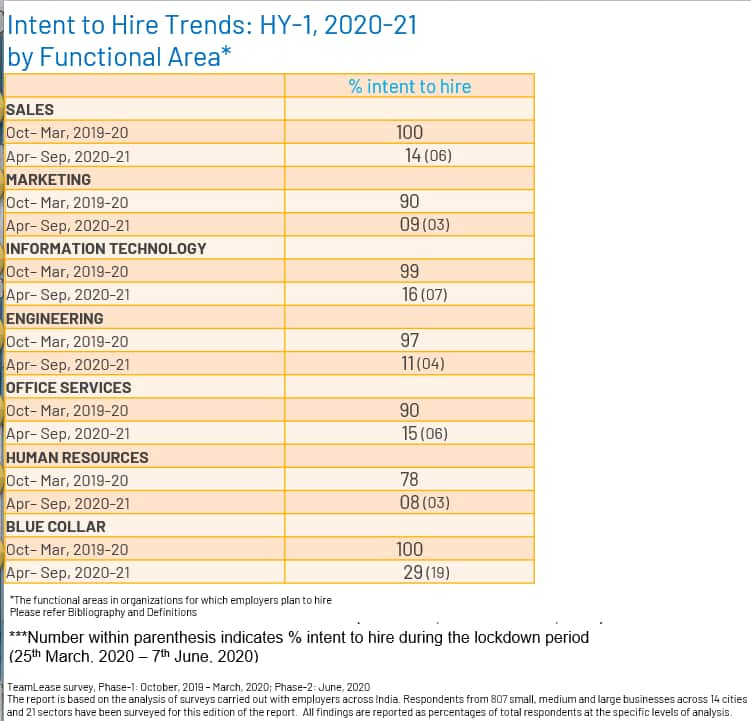 The report also said that hands-on jobs like shop floor roles, repairs and maintenance, door delivery, and some heavy lifting roles are likely to have significant demand.

For companies, the one good news is that the lockdown has brought down attrition levels.  The COVID-19 crisis has resulted in a nearly across-the-board fall in attrition rates to half or even a fourth of the rates in the previous half-year period, the report showed.

The biggest fall in the attrition rate to nearly a fourth or a third of the levels during the previous half-years has been in the travel & hospitality sector. This is followed by manufacturing engineering & infrastructure, construction & real estate, FMCG & D, logistics, retail and BPO/ITeS sectors.

The general perception in the market is that it will be tough to find a stable job if one leaves their current employer amidst the COVID-19 pandemic.