Here’s how COVID-19 has hurt the Indian aviation industry

The most telling example is the Airports Authority of India. It reported a 92% fall in revenue from Rs 2,973 cr during April-June 2019 to Rs 239 cr in 2020. CAPA India warns that the revenue impact for FY21 is likely to be over 50 percent, and job losses around 30 percent-plus.

The global outbreak of COVID-19 led to the freezing of flight operations —  both domestic and international—  in India by the end of March, to restrict passenger movement and to prevent further spread of the virus.

This has inflicted a dent —  in terms of revenue and job losses —  on the already struggling Indian civil aviation sector, government data show. Though limited operations have started, experts suggest that it will take some time for the industry to bounce back to the pre-COVID levels.

The Airports Authority of India (AAI) —  responsible for managing and maintaining civil aviation infrastructure across the country —  reported a 92 percent fall in its revenue from Rs 2,973 crore during April-June 2019 to Rs 239 crore during the corresponding period in 2020, a government reply to the Lok Sabha on September 22, 2020, said. Other wings of the aviation sector also took a hit. The revenue of Indian carriers declined by 86 percent, airport operators witnessed an 84 percent  drop, and Air India reported a 78 percent fall in revenue during April-June 2020, over April-June 2019, another reply in Parliament on September 17, 2020, pointed out.

“The revenue impact on the Indian aviation industry for FY21 is likely to be over 50 percent, and job losses, including compulsory leave without pay, are likely to be around 30 percent-plus,” Manvi Hooda, Practice Lead Consulting & Research, CAPA South Asia, said.

The full-year revenue impact depends on the direction of capacity induction, which, we estimate at this stage, to be around 60 percent plus in Q3, and around 70-75 percent for Q4, while airline losses for FY21 is expected to be around $4 billion, she added.

“Civil aviation has been severely hit with the tourism sector being down, and the former has a huge debt on them,” Sanat Kaul, Chairman (India Chapter) International Foundation for Aviation, Aerospace & Drones (IFFAAD), said.

Passenger traffic is resuming but airlines are not able to meet the financial requirement, which could lead to financial collapses, going forward, if not addressed in time.

Airports, too, are not able to generate much revenue as they are dependent on the aviation (flights) sector. So, the whole financial cycle of the sector is going to be affected unless it is sorted by strong and supportive government measures, he said.

The impact on revenue has also resulted in job losses and reduction in employment, as employees across the sector were asked to go on leave without pay until the situation normalises. Ground handling agencies were the most affected in terms of employment reduction, followed by cargo operators. “Both the aviation and tourism industries are very badly hit in terms of employment and it will take time to revive,” said Kaul. “Aviation might get back sooner as compared to the tourism and hospitality sector. The pick-up in the aviation sector has already resumed and is pretty good, with flights now flying with full capacity or the required 50-percent mark. Domestic sector will revive by the end of the year, but the international sector will still take time. Tourism industry is badly down, impacting the aviation sector, and that is a cause for worry,” he added. 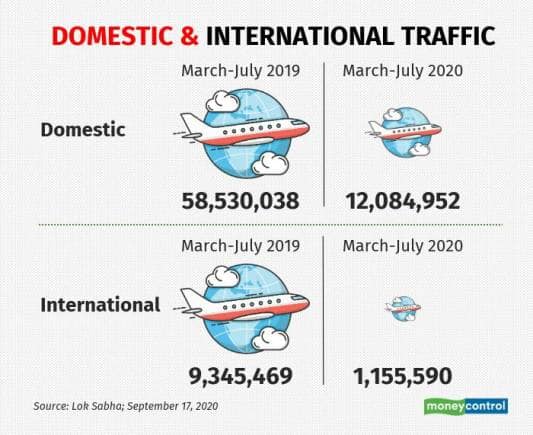 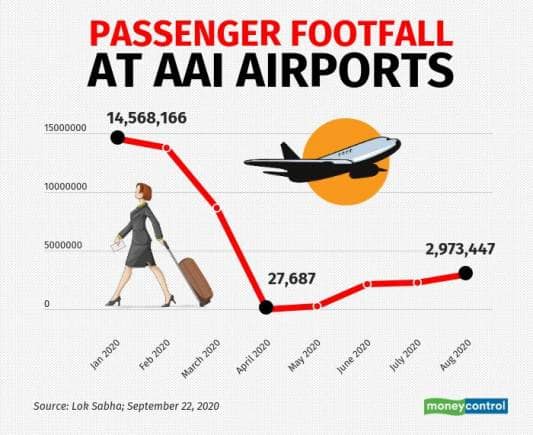 The passenger footfall across AAI airports saw a significant drop from 14.5 million in January 2020 to 27,687 in April 2020. With the economy opening up and public mobility resuming, this has now started picking up (2.97 million in August 2020).

With regards to the revival of the industry, Hooda said: “We expect pre-COVID traffic recovery by FY23. The domestic sector may recover early, but international recovery is unlikely till mid- or end-FY23.”

Travelling by air has been safe and that has given confidence to people, which is evident from the weekly traffic increase from 45,000 per day at the end of May to over 150,000 per day in October, she pointed out.

“I have been advocating the need to introduce COVID-Cold-Chain in the aviation and hospitality industries,” said Kaul of IFFAAD. Cold chain is a concept, particularly in the food sector, where a particular item is transported at a certain temperature from the source to the destination.”

“Likewise, we need to set up an institutional mechanism, involving private entities, that will provide and promise health safety to travellers and tourists throughout their journey. For instance, the passenger will be travelling and staying only through these safety approved vehicles —  taxi/fights —  and hotels. These certified safety standards will be important for strengthening passenger confidence and reviving the industry. It will be like giving a health certificate,” he explained.

Kaul also emphasised on the need to have quality testing at airports. “Antigen test, which is being done at the moment, is not good enough.  What is required is the RT-PCR test, which is of global standards,” he suggested.

Some measures taken by the government to support the aviation industry:

1) Domestic air services resumed: Initially only 33% of the summer schedule for 2020 was operationalised. This was subsequently increased to 45% on June 26, and to 60% on September 2.

2) Operation of Regional Connectivity Scheme: UDAN flights were allowed without many restrictions.

4) Promoting private investments in existing and new airports through the PPP route.

5) Adequate care taken to ensure that cargo terminals at all major airports were operational, whenever required.

“Post-COVID, we need an aviation reform agenda, which must be well-directed and result in a sustainably profitable aviation industry,” said Hooda of CAPA India.

“This must include reducing negative fiscal regime, including aviation turbine fuel in the GST and ensuring that the Directorate General of Civil Aviation and Bureau of Civil Aviation Security turn into independent institutions. Privatisation of Air India and more AAI airports, and dismantling of government ownership of aviation assets, except for ATC, should also be expedited” she suggested. Further, strategic reforms like long-term airport master plan and remote airport infrastructure to deliver tangible results under the ‘flexible use of airspace’ should be envisaged, she advised.

The situation isn’t much different in other parts of the world. A potential loss of $388-400 billion is estimated with regards to gross operating revenues of airlines worldwide in the year 2020, according to the International Civil Aviation Organization’s report released on October 8, 2020. Of these, international passenger airlines expected to witness a potential loss of US$ 257-264 billion and domestic passenger airlines worth US$ 131-136 billion.