UPCOMING EVENT:Learn how to add equities to your portfolio through ETFs. Don’t miss the webinar on Oct 19, 11.30am. Register Now!
you are here: HomeNewsBusinessEconomy

Harley, Visa, Mastercard, Amazon and Walmart at the centre of Trump’s trade push

Trump’s biggest objection is the growing trade imbalance. India enjoys a trade surplus with the US, which he wants reversed

India and the US are engaged in talks to iron out thorny issues that have dogged trade relations between the two countries. US commerce secretary Wilbur Ross is currently in India to attend Trade Winds, the annual trade mission programme of the US department of commerce. Ross met commerce and industry minister Suresh Prabhu on Monday, May 6, 2019 to discuss issues where disagreements persist.

What are the reasons behind the fissure?

On June 10, 2018, US president Donald Trump accused India of charging 100 percent tariff on some imports, after leaving the G-7 summit in Canada. He threatened to cut down trade ties with countries that were “robbing” America.

Trump’s biggest objection is the growing trade imbalance. India enjoys a trade surplus with the US, which Trump wants to be reversed. India’s exports to the US in 2017-18 stood at $47.9 billion, while India imported goods worth $ 26.6 billion during the year. The trade surplus stood at $21.3 in India’s favour. 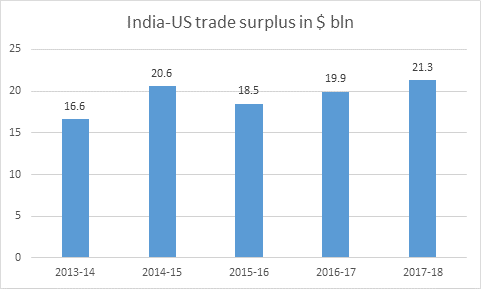 What’s the Trump administration’s main argument on trade with India?

Trump has argued that exports at zero or very low duties under the Generalised System of Preferences (GSP) is hurting the US. GSP allows market access to about 3,500 products to the US. In April 2018, the Trump administration had said it was reviewing the GSP eligibility of India, Indonesia and Kazakhstan.

What’s status of the GSP review?

On March 4, 2019, the Trump administration announced that it was withdrawing the GSP benefits for India, along with Turkey, from May 1, 2019.

Under the GSP programme, certain products are given duty free access to the US market if beneficiary developing countries meet the eligibility criteria established by the US Congress.  GSP criteria include, among others, providing the US with equitable and reasonable market access.

What are the main issues with GSP benefits extended to India?

The US launched an eligibility review of India’s compliance with the GSP market access criterion in April 2018. According to the USTR “India has implemented a wide array of trade barriers that create serious negative effects on United States commerce.  Despite intensive engagement, India has failed to take the necessary steps to meet the GSP criterion”.

Have the GSP benefits been withdrawn following the announcement in March?

Not yet. By statute, these changes may not take effect until at least 60 days after the notifications to US Congress and the Indian government, and will have to be enacted by a Presidential Proclamation. That hasn’t happened yet.

India's total GSP benefits were to the tune of only USD 190 million last year.

What are the other main problem areas in Indo-US trade relations?

The Trump administration has repeatedly said that it wants lowering of duties on several products including Harley Davidson motorbikes. In February, 2018, India had cut the import duty on heavier motor bikes such as Harley Davidson to 50% from 75%. The US wants it lowered even further. It also wants India to reduce price caps on medical implants such as stents and knee caps. The US also wants lower tariffs and greater access to the Indian market for its dairy products.

In March 2018, Trump imposed tariffs on foreign made steel (25%) and aluminum (10%). India is the world’s 14th-largest steel exporter. It exported iron and steel worth $320 million and aluminium worth $350 million to the US in 2016-17. The US ranked seventh as a destination for India’s steel exports, accounting for 5% of exports. Aluminum and steel together account for around 3% of India’s exports to the USA. These were aimed at getting US companies to buy local products and boost domestic metal industry. Trump has justified the tariffs as a way to fight back against an “assault on USA” by foreign competitors.

The Trump administration has time and again insisted that India is resorting to discriminatory trade practices. It has challenged India’s export subsidies at the WTO. It has threatened to increase import tariff on “thousands and thousands” of Indian motorcycles to the US.

How has India responded to the Trump administration’s move to raise tariffs on steel?

On June 20, 2018, India announced that it will raise tariffs on imports of 29 products from the US, including almonds, apples and phosphoric acid, worth $10.6 billion. This was in retaliation to the steel and aluminium tariff hikes by the US in March 2018. This higher tariffs’ implementation, however, have been delayed multiple times. On May 2, 2019 India further pushed back the implementation by 14 days to May 16, awaiting more clarity on from the US on its decision to withdraw duty-free benefits under GSP to Indian exporters.

What has been main points of discussion between Indian and US officials during Wilbur Ross’s ongoing visit?

US Commerce Secretary Wilbur Ross held bilateral discussions with Commerce and Industry Minister Suresh Prabhu on May 6 on a raft of issues. The US wants India to review its decision to cap prices on medical devices such as knee implants. The US is also pressing India to review its recent ecommerce policy and the Reserve Bank of India’s (RBI) insistence on financial services companies to store data in local servers.

In a tweaked policy for the e-commerce sector that kicked in from February 1, 2019, India has barred online retailers such as Flipkart (now owned by Walmart) and Amazon from selling products of companies in which they own stakes. According to the new rules, a vendor/seller will be deemed to be controlled by an e-commerce marketplace entity if more than 25 percent of its total sales are to one specific online market place.  The new rules are predicated on the assumption that these will level the field among online and offline retailers. Local offline retailers have been lobbying with the government that online market places, flush with foreign money, are driving brick-and-mortar stores out of business. The US is of the view such policies are discriminatory and distorts trade.

What’s with the RBI’s data localisation policy that has upset the US?

On April 6, 2018, the RBI notified that payment companies will have to store transaction data of Indian customers within India. This rules will apply to all payment firms, including Mastercard, Visa, American Express, Paypal, Google Pay, WhatsApp, PayTM and PhonePe among others. RBI wants unfettered access to all data on full end-to-end transaction details, information collected, carried and processed as part of the message or payment instruction to be stored in local servers in India. This will also include data stored with third party vendors and other entities in the payment ecosystem. The data for the overseas leg of a transaction, however, can be stored in a foreign country.

Many global companies had sought more time to comply with the rules. The Trump administration is not happy with these rules and Ross has raised it with Prabhu during the bilateral meeting on May 6. In 2018, two US Senators John Cornyn and Mark Warner have written to Prime Minister Narendra Modi to adopt a softer stance on data localisation.

Just as it was appearing that the US and China were close to a deal, President Donald Trump's tweets hinted that the talks are at a risk of a breakdown. On Sunday, May 5, Trump tweeted that tariffs of 10% on certain goods would rise to 25% on Friday, and $325bn of untaxed goods could face 25% duties "shortly". “The Trade Deal with China continues, but too slowly, as they attempt to renegotiate. No!" he tweeted.

He followed that on Monday, May 6 by tweeting that the US had been "losing" $500bn a year on trade with China. "Sorry, we're not going to be doing that anymore!" his tweet said.

Markets across the world, including India, saw this as an impending possibility of a full-blown trade battle between the world’s two largest economies that can potentially snowball into a global trade war.

What does this mean for the global economy, given that it trade flows are subject to a rules-based regime under the World Trade Organisation (WTO)?

While, it is tempting to simplify US President Donald Trump’s trade combat with China as a matter only between the world’s two biggest economies, the consequences actually spread across continents. Since March 2018, both the countries have erected tariff walls to check goods a entering each other’s territories. In the last 14 month, between them, Washington and Beijing have imposed import taxes worth about $400 billion—an amount approximately equivalent to India’s current foreign exchange reserves. This has left the rest of world, including India, as stranded bystanders, giving the feeling of being crushed over by two mammoths who want to alter global trade rules, but on their own terms. In all of this, WTO, the world’s trading cop, has been found wanting on its policing responsibilities in helping hammer out a solution.
Kamalika Ghosh
Tags: #Amazon #China #Donald Trump #GSP #Harley-Davidson #RBI #trade #trade deficit #Walmart #Wilbur Ross
first published: May 7, 2019 04:46 pm