Growth outlook: Are businesses and consumers more to the point than RBI?

September saw a string of fiscal measures to support growth, rounded off with a 25-basis point (bps) easing by the Reserve Bank (RBI) in October. However, such is the depth of economic gloom that even supportive macro policies, which otherwise elicit considerable excitement, have failed to lift mood. In fact, the monetary easing was poorly received by markets; equities fell and bond yields rose in response to the announcement.

The RBI lowered its real GDP growth forecast for FY20 to 6.1 per cent from 6.9 per cent in August. This is the second downgrade of its initial growth projection of 7 per cent. Looking ahead beyond FY20, however, the central bank’s growth outlook is optimistic: In FY21, its baseline forecast shows real GDP growth recovering sharply to 7 per cent.

This bounce back is propelled by positive impulses from the government’s recent, pro-growth measures, viz. foreign direct investment (FDI) policy reforms, enabling steps for housing and export sectors, recapitalisation and merger of public sector banks, faster NPA resolution, in conjunction with faster transmission of the monetary policy. All put together, and assuming downside risks from global trade tensions, Brexit and financial market volatility do not materialise, the Indian economy is predicted to return to the 7 per cent growth path in 2019-20.

Professional forecasters think likewise. Their median projected growth for the next year is in line with the central bank’s position. The overall picture on future growth prospects, therefore, can be summarised like this: The growth cycle troughed 5 per cent in April-June, after which it turns steadily upwards. The RBI predicts the growth cycle turning up to 5.3 per cent, 6.6 per cent and 7.2 per cent, respectively, in the remaining three quarters of FY20. In other words, the worst is over for the Indian economy.

Strangely, businesses and consumers have exactly the reverse views on current and future economic situation. The RBI’s consumer and business confidence surveys, the July-September round of which was released the day of the monetary review (October 4), showed the third deepest plunge in sentiment and expectations since the surveys began. 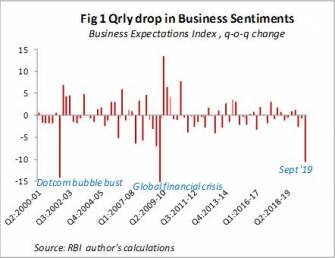 Figure 1 shows the business expectations index fell a steep 10.6 points (cumulative 14 points fall from April) for the October-December quarter. The surveyed businesses expect manufacturing slack to increase from lower orders, production and exports. However, it is the extent of the fall that is shocking. This is exceeded only twice before — in Q1 FY10 and Q4 FY04, which are clearly identified with external shocks. So, what explains the severe fall in business confidence now? 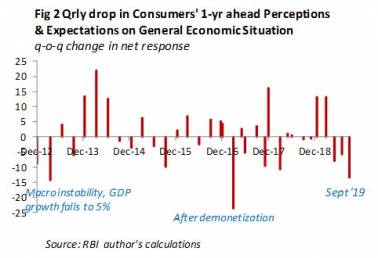 Move over to consumers’ expectations and perceptions on the general economic situation one year ahead and the pattern is repeated (Figure 2). These too display their third, most-severe fall ever. Consumers expect a worsening economic outlook, i.e. they are pessimistic about improvement in economic prospects. Again, there is the puzzling absence of a clear trigger; the past two falls are respectively associated with demonetisation and macroeconomic turbulence.

The persistent, deepening pessimism of producers and consumers from April is hard to link only with the July budget, which was not well received. Many of those unpleasant measures were rolled back. These, combined with last month’s growth-positive responses whose impact is incorporated in RBI’s growth projections, ought to have reversed the slide. Besides, there is the huge positive event of a general election outcome of popular choice at May-end, which is an enormous confidence or sentiment booster. However, puzzles stay.

Putting aside speculation, it is remarkable that so far the evolving economic data incline more towards economic agents’ views captured by surveys than the official or private forecasts. For example, the manufacturing PMI remained unchanged in September from its August value (51.4); services’ PMI plunged to a 19-month low of 48.7 from 52.4 in the previous month; August industrial output contracted by 1.1 per cent; exports and imports shrank a respective 6.6 per cent and 13.8 per cent, with non-oil and non-gold import shrinking at 8.9 per cent in September.

Moreover, developments in the domestic financial sector, whose vulnerabilities and weaknesses do not figure in downside risks flagged by the RBI, further undermined confidence and continue to pose instability threats.

There are indications that July-September growth outturn may be lower than predicted. The current quarter’s prospects do not seem improving so far. Minus base effects, real GDP growth rapidly decelerated to 6.3 per cent and 5.7 per cent in the last two quarters of FY19 — the actual FY20 growth outcome may perhaps not match up to the scaled-down 6.1 per cent.

The interesting part to observe, of course, will be if producers and consumers turn out more accurate in their ground reading than the official and professional forecasters.

Renu Kohli is a New Delhi-based macroeconomist. Views are personal.