implemented since March, government said on May 29.

"As some of these units are yet to resume operations and owing to the fact that the statutory timelines for submitting the requisite financial returns have been extended by the Government, these Estimates are based on the available data," the release said.

Consequently, the estimates (quarterly as well as annual) are likely to undergo revision, the release said. 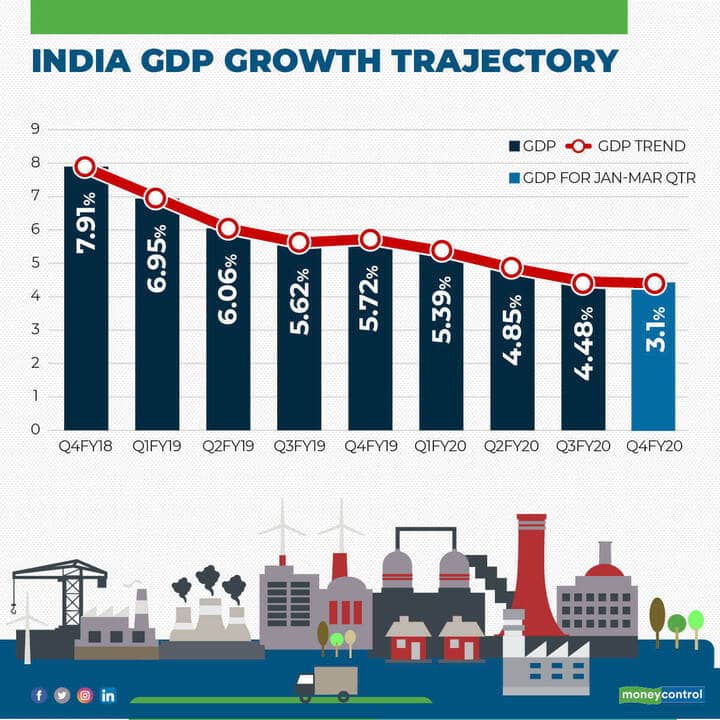 India's gross domestic product (GDP) grew 3.1 percent during January-March this year, as the COVID-19 induced disruptions appeared to have devastated the broader economy, pummelled by collapsing household spending and shuttered businesses that are battling to stay afloat.

It could get worse as restrictions and lockdowns continue to constrain people's movement, severely hurting economic activity. The nationwide lockdown kicked in from March 25, and its actual impact on the economy will show up in the subsequent months when businesses screeched to a standstill. At 3.1 percent, India’s “real” or inflation-adjusted GDP growth was the lowest in 44 quarters, national income data released by the Central Statistics Office (CSO) on May 29, showed. Asia’s third-largest economy, which was the engine of global growth until recently, was staring at the possibility of slipping into a full-blown recession, the first time in 41 years.
Moneycontrol News
Tags: #coronavirus #Economy #GDP
first published: May 29, 2020 08:36 pm