Explained: Post-Brexit, here's how getting a UK work visa will change

Migrants will have to score a minimum of 70 points to be eligible to apply for a United Kingdom work visa.

Are you an Indian holding a Phd in a STEM (science, technology, engineering and mathematics) discipline? If so, getting a United Kingdom visa could become easier for you starting next year. That is because, even if your salary is below the minimum threshold set by the UK government in a proposed new regime, there are a few concessions.

These concessions will make you eligible for immigration under new rules that will kick-in from January 1, 2021.

This is one of the many new regulations that the UK government has proposed in its attempt to attract talent after exiting the European Union (EU) on January 31, 2020. Following this, a new set of rules will come into place which would end free movement of people.

The UK government will introduce an Immigration Bill to bring in a firm and fair points-based system to attract high-skilled workers.

The total number of work visas granted (tier two) touched an all-time high of 1.1 lakh in 2019. Of these, over half were granted to Indians.

In February, the UK government said it is taking a phased approach to ensure smooth delivery of this new system and to allow sufficient time for everyone to adapt.

Taking guidance from the Migration Advisory Committee (MAC) report published in January, a minimum of 70 points will be required to be eligible to live and work in the UK. 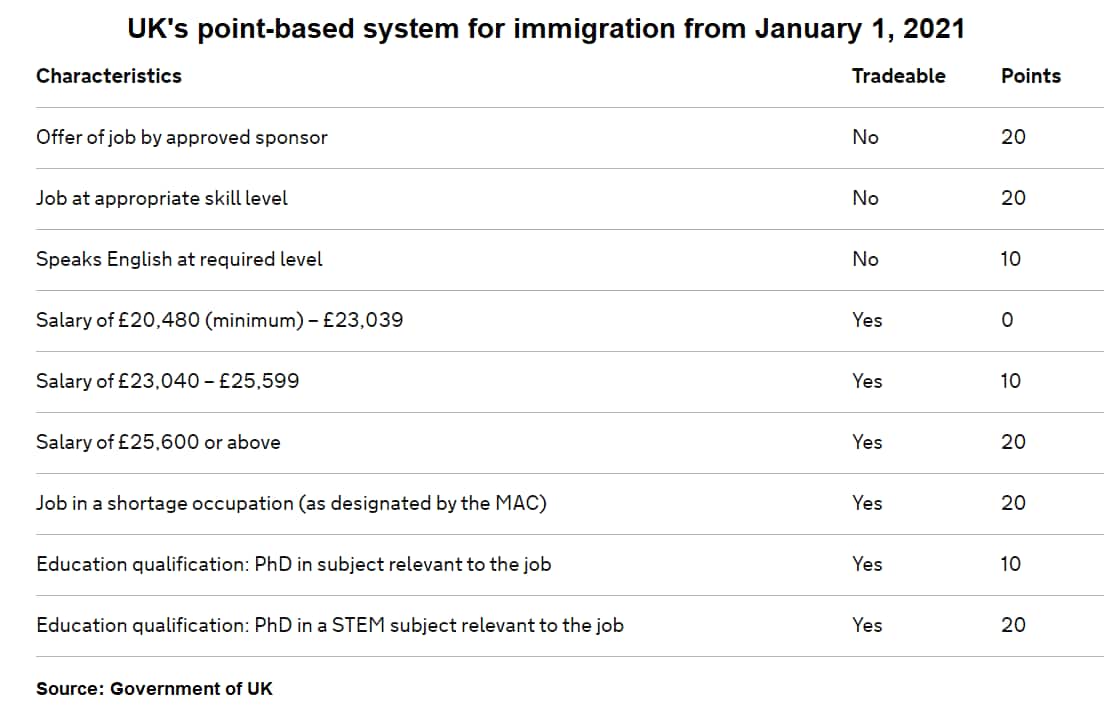 The points-based system will provide simple, effective and flexible arrangements for skilled workers from around the world to come to the UK through an employer-led system.

Earlier, employers could decide who would be eligible to migrate depending on skill requirements. However, the UK government has said that they are taking back this power to decide on offering work visas to migrants.

In the new system, all applicants, both EU and non-EU citizens, will need to demonstrate that they have a job offer from an approved sponsor, that the job offer is at the required skill level and that they speak English.

A minimum B1 level of English would be necessary. In simple terms, a migrant should be able to effectively communicate in English including work-related matters, describing situations and writing simple and coherent text.

The B1 level also indicates that an individual will be able to 'cope' with most of the situations that would arise from work-related trips in the region, including conversing with strangers, asking for directions and addressing a meeting, among others.

Each category has a set points system. For instance, while a salary of £25,600 or above would entitle a candidate to 20 points, job in a shortage occupation will be equivalent to 20 points. Speaking English is mandatory and would be equal to 10 points.

How will this work?

For example, a university researcher in a STEM subject wishing to come to the UK on a salary of £22,000, (which is below the general minimum salary threshold), he or she may still be able to enter if they have a relevant PhD in a STEM subject.

Likewise, a nurse wishing to come to the UK on a salary of £22,000 would still be able to enter the UK on the basis that the individual would be working in a shortage occupation, provided it continues to be designated in shortage by the MAC.

A list of the stills in shortage will be published by MAC. It is likely that professions like nurse, coder, data mining and technology-linked engineering will be high in demand due to shortage of local talent.

Some points could be tradable. The UK government has said that migrants will still be awarded points for holding a relevant PhD or if the occupation is in shortage, which they will be able to trade against a salary lower than the ‘going rate’ or the minimum threshold.

A STEM PhD would mean that a candidate could be eligible even if they are paid 20 percent lower than the minimum requirement.

The UK Home Office will continue to refine the system and may also include attributes that can be ‘traded’ against a lower salary. For example, this might include a greater range of qualification levels or other factors such as age or experience studying in the UK.

The MAC report said that about 70 percent of European Economic Area (EEA) resident citizens arriving in the UK since 2004 would be found ineligible for either a skilled-work, family or tier four visa.