The Economic Survey documents included an entire chapter on ‘Sustainable Development and Climate Change’, indicating how the government is prioritising the agenda.

Climate finance will be critical to the success of climate action and India is geared to increase the focus on climate action following the announcement of India’s target of becoming ‘net zero’ by 2070, according to the Economic Survey 2021-22.

The Economic Survey documents included an entire chapter on ‘Sustainable Development and Climate Change’, indicating how the government is prioritising the agenda.

“There is a greater thrust on climate action following the announcement of India’s target of becoming Net Zero by 2070. Climate finance will remain critical to successful climate action by developing countries, including India,” the Economic Survey document said.

On January 31, before the finance minister tabled the Economic Survey in the parliament, President Ram Nath Kovind said in his address to the joint sitting of both Houses: “Climate change is a major challenge confronting the whole world at present. India has emerged as a responsible global voice on the subject.”

Under the Paris Agreement-2015, India had submitted its Nationally Determined Contribution (NDC) to reduce emission intensity of its Gross Domestic Product (GDP) by 33-35 percent by 2030 as compared to 2005 levels. It also committed to create an additional carbon sink of 2.5 to 3 billion tonnes of carbon dioxide equivalent through additional forest and tree cover by 2030, and achieve about 40 percent cumulative electric power installed capacity from non-fossil fuel energy resources by 2030.

Against these targets, India’s third Biennial Update Reports (BUR) submitted to the UNFCCC in 2021 reports that during 2005-2016, the country had reduced emission intensity of its GDP by 24 percent.

“According to the India State of Forest Report 2021 released in January 2022, the total carbon stock in the country’s forests is estimated to be 7,204 million tonnes, and the carbon stock in forest has Sustainable Development and Climate Change 229 increased by 79.4 million tonnes as compared to the last assessment of 2019,” the report said.

The Central Electricity Authority said that as on end-December, the share of non-fossil sources in installed capacity of electricity generation was 40.20 percent.

The Economic Survey said that in 2020-21, India progressed further on achieving the Sustainable Development Goals (SDGs). 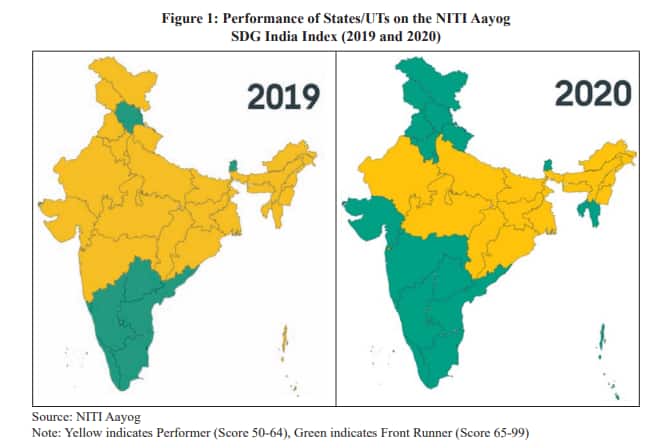