Digital transactions have been witnessing a slower pace of growth each month post demonetisation with August transactions showing 26.5 percent dip in value terms from its peak in March.

The number of transactions declined 8 percent from the peak in December.

Although the transactions have grown compared to the month of July, it is a marginal rise of 2.2 percent, Reserve Bank of India data showed. 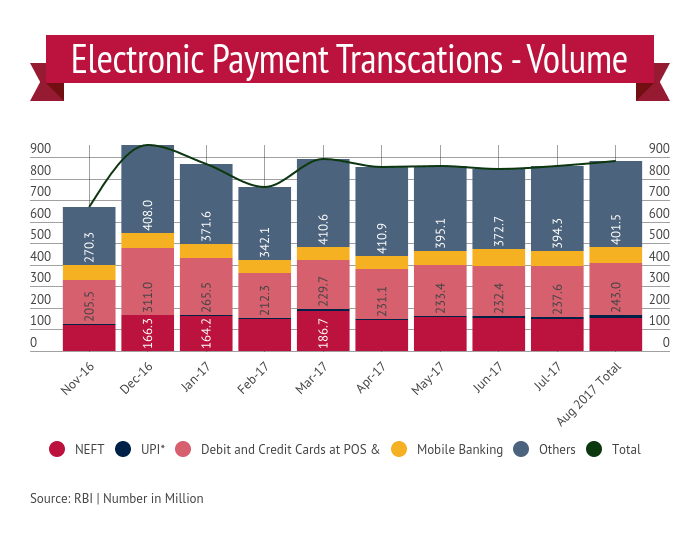 Bankers and other experts say demonetisation and the year-end transactions including the Goods and Services Tax (GST) transactions in August drove the momentum to a large extent.

However, gradual decline from the peak levels was on expected lines as cash is always the preferred option for Indians. Still, it is appreciable that the numbers have not come down by a large amount. There are many who have permanently moved on to digital, which is a bigger benefit.

As per the RBI's latest data, electronic transactions declined to Rs 109.82 lakh crore in August 2017 as against the peak of Rs 149.59 lakh crore witnessed in March this year. In July, the transactions stood at Rs 107.38 lakh crore.

However, RTGS comprised of over 80 percent of the total value of transactions. On the other hand, the government and RBI-backed project United Payments Interface, or UPI, designed by National Payments Corporation of India (NPCI), has shown a 22 percent jump in growth for the month of August to 1.66 million transactions worth Rs 4,127 crore.

In July, the number of transactions done through UPI was at 1.14 million worth Rs 3,381 crore.

Even though on a smaller base, UPI is the only application that has seen a steady increase without any de-growth since its adoption. Its final phase launched in August last year.

An official with NPCI said, “This was bound to happen as the product is seeing a faster adoption by corporates and individuals, also to some extent, given the aggressive push by the government. Additionally, we have seen that BHIM app also aided seamless UPI transactions.”

Bharat Interface for Money app, or BHIM, which includes UPI under it, is now touted to be the single point for all mobile payments as the government intends to use Bharat QR Code to make it available across all merchants, government departments and PSU (public sector undertaking) receipt points. It will also enable payment of utility bills such as electricity, gas, and telephone, GST bills, public transport, etc.

Deepak Sharma, Chief Digital Officer at Kotak Mahindra Bank, “I think, UPI is much easier to operate without adding beneficiaries, also non-bank entities have started using UPI and in addition, there is push by the government.”

BHIM and UPI 2.0 to be game changer

According to Sharma, there are more use cases under the BHIM application so UPI will continue to grow in terms of its reach and number riding on small value and one-time payment as “it is solving a customer problem of convenience” on the payments side.

Sharma says the real benefit will come with UPI 2.0 when there will be more use cases with e-mandate and utility bill payments pushing more transactions through this route.

The payments would grow the transactions both at the merchant and individual level.

In FY16-17, total electronic and card payments cumulatively grew by 46 percent to Rs 139.67 lakh crore in value terms and up by 65 percent in volume terms to 965.5 crore transactions from a year ago, as per RBI’s annual report.

It remains to be seen if the government vision is in sync with the citizens’ adoption, especially at the retail front when cash has become the king again as the currency in circulation has come back to almost pre-demonetisation levels.